Beyond Borders: An Unexpected Trip to Mexico with a Dying Man 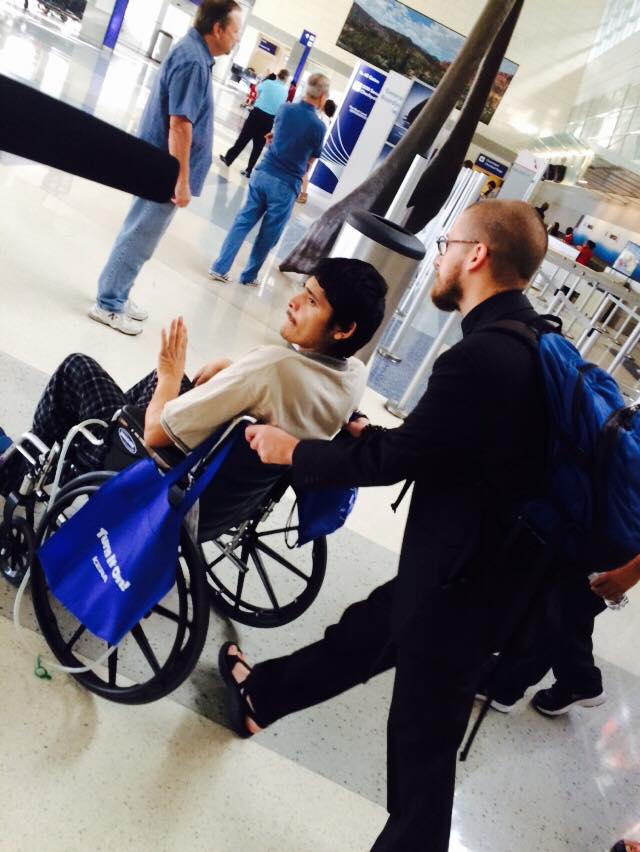 I didn’t expect to be on a flight to Mexico.  I thought I would spend most of today completing multiple unfinished writing projects that I have long neglected.  Things changed when I met Ramon.  Carrollton, Texas is not the type of place one would expect miracles to happen.  When I pulled up to the apartment complex two days ago, I had no idea what I was getting into.  I only had vague knowledge that a young man was dying of bone cancer inside and needed help.  Upon seeing Ramon, I knew the situation was dire.  Ramon’s father seemed to be giving all the help that he could conjure up.  The remainder of Ramon’s family was back in Guadalajara.  Then came the request…”Can you help us get him back to Mexico?”

Through much conversation and consultation, persons from the Cathedral of Hope United Church of Christ, our Spanish-speaking congregation and Hope for Peace and Justice worked together to devise a plan to get Ramon home.  I was overwhelmed and heartbroken by the whole situation.  Truthfully, I was afraid and ready to get out of the apartment.  When a traveling companion fell through for Ramon, one of my colleagues looked up and declared, “Can anyone travel with him?”  Though words came out of my mouth, I know that I didn’t speak them.  It was as if I was listening to someone else.  “I will go!” I heard.  When I realized that it was my mouth the words came out of, I knew the Spirit had spoken.  In the countenance of the universe, I realized a miraculous human union beyond the power of death and across boundaries of language and nationality was taking place.

For the last few days, I have grown angry thinking about the factors that complicate Ramon’s situation.  Though he has spent ten years working hard and paying taxes in this country, he does not have the proper papers to be documented.  Without papers, Ramon has had an incredibly difficult time securing healthcare that could save his life.  Due to his Mexican nationality, many in our country have treated him as something other than human.  Ramon has relied on the charity of strangers to get through this difficult hour.  Some have been charitable and some have not.  From his nationality to his access to money, Ramon has lived his life on the other side of a boundary from most of us.  Though he was here with us, we were not with him.  We forgot that we belong to each other.  We forgot that Ramon is in us and we are in Ramon.  Today, I am experiencing human connection with Ramon in all fullness.

The cries of pain and sorrow that filled the air as Ramon’s dad kissed his son for the last time at the airport shook my bones.  In the deep love that I saw exchanged, I saw how much God loves us.  I prayed for the day when death will be no more.  When Ramon kissed his dad goodbye for the last time in this life, I knew that I was witnessing something eternal.  Passing through security, Ramon was unable to lift his legs.  I picked up each leg and helped him stand.  I realized in this moment that Ramon was teaching me how to lift my legs and stand.  Getting on the flight, I lifted Ramon out of his wheelchair and placed him into another wheelchair.  In this moment of my frustration that he even had to switch chairs, Ramon taught me to be flexible.  While I administered morphine to Ramon, I realized that he was medicating me with his presence.  Throughout his groans and struggles of pain, I too groaned and struggled with the pain of knowing that a 28-year-old man was dying in front of me.  What type of God would allow such a thing?  When Ramon crossed himself and kissed his rosary, I embraced his faith as my faith.  Throughout our deeply spiritual journey, I realize again and again that the images of God we all carry connected Ramon and I.  In my moments of doubt and anger, I realized that God was with us because Ramon was with us.

Upon arrival to Guadalajara, we walked tall together.  Together, we made it.  There was a woman who walked up to Ramon and said she saw him on television.  After giving him some money, she asked that Ramon intercede to the Virgin of Guadalupe on her behalf.  From my vantage point there was no need for intercession, the heavenly saint was being made reality right before our eyes.  When Ramon encountered his brothers and friends, I struggled to maintain my composure.  In the midst of a monumental sadness at an approaching death, the joy that flowed out transcended death.  Though Ramon’s trip had just ended, I knew it had only just begun.

Though I have only known him for three days and will probably never speak to him again, Ramon will remain with me for eternity.  I don’t speak such a thing to be dramatic.  I speak it because it is true.  Love is eternal.  Though we couldn’t easily speak to each other, Ramon and I shared love in our brief moments of union.  In allowing borders to subside and love to come in, we quickly realized that we belong to each other.  In the midst of such numerous borders to human flourishing, I pray that the world will realize the same.

September 29, 2014
The Inaccessible Pulpit: Rev. Justin Hancock and the Struggle for the Rights of Disabled Persons
Next Post

October 12, 2014 The Blessing of Communion at Domestic Violence Prevention Wednesday // Cathedral of Hope UCC 10/8/14
Browse Our Archives
Follow Us!