The Devil is a Mainline Protestant named Jonah

The Devil is a Mainline Protestant named Jonah

Church. I hate getting up for that shit. I always stay up too late the night before. I
guess Saturday night doesn’t lend itself to thoughts of Sunday morning. Regardless,
I opened my eyes and started to get up. Something pulled at my ankles. I looked
underneath the covers and I saw a red hand. As my grandmother used
to say, “The devil don’t ever want you to go to church.” I fought. I kicked. I
scratched. I clawed. Nothing was working. Finally, I shouted out what church I was

going to and I was immediately let go. The devil already had enough people there.
It seems like all mainline protestant churches are the same. A sprinkle of
salvation…a sprinkle of sanctification…and a shit ton of moderation. I didn’t have
anywhere else to go. This was the most progressive church in town. For at least a
small portion of the service, you are going to hear something meaningful. As for all
the other close mainline churches, I don’t think they do anything more than simple
slap each other on the ass the whole time. My car pulled up to a church that was
only slightly better.

The glass doors swung open. Everybody was so far gone past giving a shit. I felt like
I was watching the church die with every collective breath. There was no energy.
There was no movement. There was only a cautious irrelevance. After talking with
multiple people, I sat down in the vestibule next to an overhead speaker. Before
long, I’d dosed off. A short time later, I was awoken by movement very close to my
leg. When I opened my eyes, there was an older man sitting right next to me. After
we made eye contact, he extended his hand and forcefully declared, “I’m Jonah.”

Before I knew it, I was deeply involved in a story that I didn’t necessarily want to be
involved in. Jonah spoke about being involved in a mainline church when he was
young. “Though I didn’t learn anything much…I didn’t care…we had a great time.”
As he grew older, he wrestled with a call ministry. “God pursued me hard. Finally, I
just jumped opened the doors and jumped in. Maybe it was suicide, but I knew that
God would be nowhere to be found in a Southern Baptist church.” Eventually life
spit Jonah back into his home church. Over time his defenses evaporated. “I just
started to realize how easy it all could be.” Seminary was a breeze. “When a small
mainline church came open in a suburban area with good benefits, I jumped at the
chance. It didn’t seem like it would be too stressful at all. My kind of place.”
Unfortunately, members of the church started to rise up and grow the church. “I
didn’t want that shit at all. Didn’t they know this was a mainline church?” When the
church started talking about Jesus and social justice, Jonah was done. “I knew that
there was nothing meaningful there at all.” After reflecting for a moment, I asked a
question, “Is this how your ministry has gone your entire life?” Pausing, Jonah
collected himself and replied, “By the grace of God, I’ve made it through.” Thanking
him for his time, I started walking toward the door.

I felt funny. When I pushed open the door, I turned around for a final wave. Jonah
and his red hand waved back. 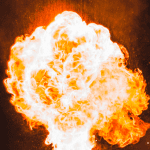 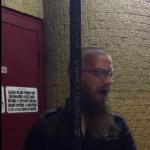