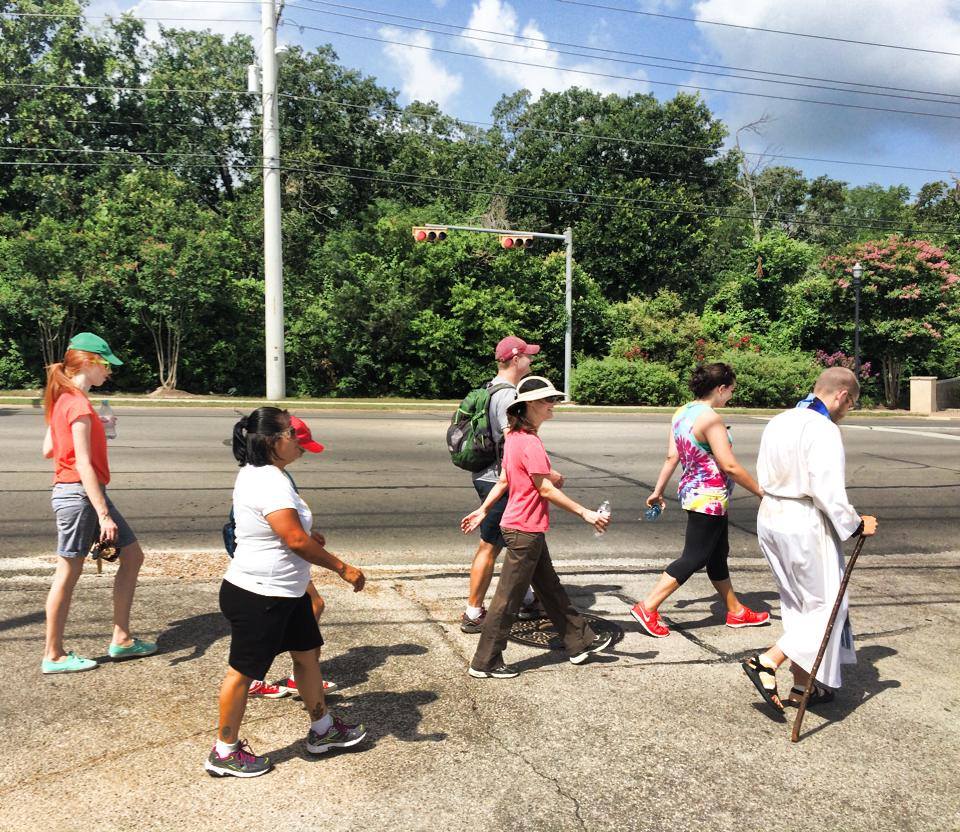 Still moving slowly, I met a group of people to walk down the middle of College Station and Bryan with me.  We talked about the death penalty.  The weather transformed the conversation quickly.  There were not many steps before we transitioned to talking about how miserably hot we were.  When we got to the church, I was soaked through my robe again.  Traveling in a wet robe to a cold inside causes you feel like you are turning into a sea lion.

I climbed the pulpit.  I was nervous.  This was the first time I had ever preached in a Roman Catholic Church before.  I thundered down about needing to place our bodies into the conversations concerning social injustice.  I had spoken about such things previously, but now I was truly starting to embody and believe it in a new way.  After about 15 minutes, I said “amen.”  There were awkward moments between the time of reflection and the time of departure.  I didn’t know who was supposed to dismiss the group.  The awkward blossomed to beautiful when I stood up and the people came to the aisles to bless me on the way out.  The love of God flowed through the many hands that were placed on my body as I walked by.  I now had the strength to finish.

Walking through the dirt and grass, I yearned for what I knew was approaching.  The sun hit my eyes in a majestic reflection of light when I stumbled forward.  I stooped down to drop both my hand and soul into the Brazos River.  All of my sins were redeemed.  I felt cleansed.  I knew that I had to continue…I had to continue sounding the alarm of what the death penalty is doing to our souls.

Night was rapidly approaching as I stumbled through Caldwell looking for something to eat.  I found a Chinese restaurant still open.  I gobbled up strawberries, fried rice and coconut shrimp and washed it down with a cold Sprite.  CNN was running a show about the anniversary of O.J. Simpson and the white Bronco.  For some reason, I felt like the struggle to abolish the death penalty was similar to the situation playing out before my eyes on television again…it is a tragedy from start to finish.

I got bed bugs overnight.