JH: With all due respect Congressman, this is a town hall…where I question you…not you question me. I asked you a question Congressman. And sir and sir…I think it is again disgusting and despicable to tell me that in 2011 I didn’t care about immigration. I’ve been caring about the gospel of Jesus Christ the entire time. I’m asking you if you care about the gospel of Jesus Christ.

CB: well the answer to your question is yes…good we’ll move on.

I look forward to seeing it!

“I don’t even vote. I’m a follower of Jesus. The most faithful way that I can engage the electoral process is by refusing to engage. My prophetic calling is just too important to me to expend my energy on candidates….my job to challenge them all. The path of Jesus is about the pursuit of perfection not the compromise that inevitably comes with voting. Does that make sense?”

Flames filled his eyeballs. It became very apparent that our views differed. Honestly, I thought he might hit me.

“You are a complete dumbass. What kind of minister are you? Do you think Jesus wants to keep Trump in there? Haven’t you ever heard of vote or die? You are definitely going to die. I’m through with you.”

I think he felt like I was devaluing what he was doing. Maybe I was? Regardless, I thought it was important to let him know why I wouldn’t be doing all of this stuff he wanted me to do. I think there is a clear reason that Jesus got lost in the conversation. We simply worshipped different Gods.

Then, I looked to the heavens. I saw Jesus at the entrance. Deeper inside…I saw the booths. Enraged, I watched Jesus destroy it all.

While Linsey Fagan seems wonderful, I won’t be voting for her…or anyone else for that matter.

***Since writing this piece, I’ve had a slight change of heart. Donald Trump is the most evil leader our nation has ever seen. Seeking greater insight on how to live in perilous days like ours, I have studied the struggles of German Lutheran pastor and theologian, Dietrich Bonheoffer. Caught plotting to kill Hitler, Bonheoffer was executed. Throughout the entire ordeal, Bonheoffer always struggled with whether his actions were moral or not. While Bonheoffer’s decision certainly doesn’t equate with the simple decision to vote, it does illustrate that dark times may require more than what our minds or consciences can understand. With that said, I am prayerfully considering voting Tuesday. I pray that you will join me. 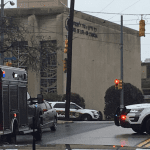 October 28, 2018
Quadritarianism: Revelation of the Tree of Life
Next Post 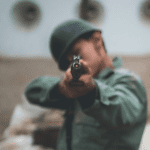 November 11, 2018 Are Veterans Inherently Dangerous? // Happy Veterans Day?
Recent Comments
0 | Leave a Comment
"Overpopulation has been our greatest sin: it makes human life cheap and dangerously overabundant, and ..."
Jennifer A. Nolan Eschatology: a Forgotten Theology for Our ..."
"It’s really not so much a question of selfishness as waiting your turn. Yeah, rich ..."
Silverwolf13 The Vaccination Ethic.
"No, his death accomplished nothing.May the LORD have mercy on the poor man's soul--as I ..."
Cletus Safari 6 Years Ago // Don’t You ..."
"Taylor-Green is Bachmann's even-more-evil twin sister."
Ocelot Aardvark Congresswoman Majorie Taylor Greene, My Former ..."
Browse Our Archives
get the latest from
Jeff Hood
Sign up for our newsletter
POPULAR AT PATHEOS Progressive Christian
1