How’s that Religious Freedom Thing Working Out These Days? 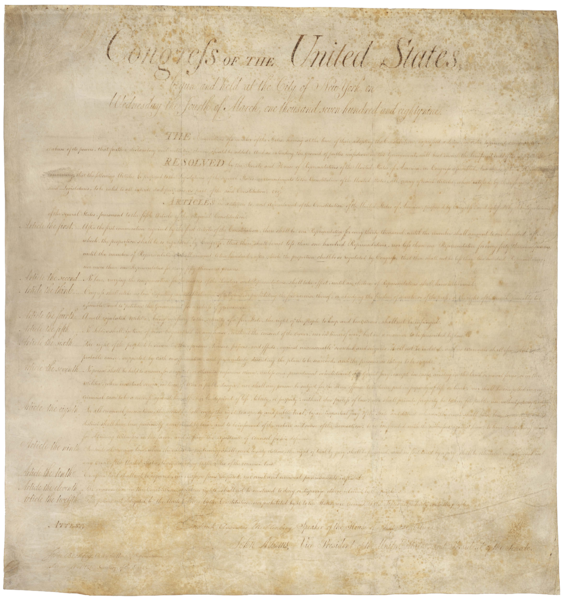 Let’s not delude ourselves: The United States has never quite lived up to her ideals in the civil liberties department.  Compared to the competition, of course, the US Constitution was and remains quite the breakthrough.  If we’re going to have to constantly fight the oppressiveness-reflex, give me a country where we can do it via lawsuits any day.

But why is it so, so hard to just live and let live?  Let’s do a test.  I’ll list a contemporary challenge to a civil liberty, and we’ll see how many comboxers insist that the government is *absolutely right* to coerce the citizenry on that particular topic:

What we teach in the public schools. The voters, or the administration, or the local moral majority is just certain that the poor children are languishing for lack of _______________  contentious religious or moral teaching being included in the public school curriculum. It must be taught! Otherwise children won’t learn what to think!

What children must be taught, anywhere at all.  Heaven forbid that parents be trusted to educate their own children.  Parents are lazy, stupid, and dangerous.  The state can be trusted.  The state will preemptively ensure that your children are properly reared.

What products a business must sell, and to whom. Now now, let’s not get carried away.  It’s perfectly okay for business owners to deny services to certain customers under certain situations, for all the approved reasons.  It’s okay not to stock pre-approved you-don’t-have-to-stock-it items.  The important thing is that you, the business owner, don’t get to decide what business you conduct.  The government will tell you.

Am I keeping this dangerously open-ended?  Yes I am.  Because I’m so mean.  Because if you tell me “freedom of religion”, I don’t think to myself, “Freedom to practice the approved religions, and restrictions on practicing the weird religions those wrong-headed people subscribe to.”

That’s what freedom is.  It’s radical.  It includes the right to be wrong.

In Christian thinking we distinguish between license and freedom.  “I have a right to kick puppies” is license: Taking upon yourself the right to do something evil.  Freedom, in the license-vs.-freedom conversation, has more the sense of “emancipation”.  Think: “I’ve been freed from the desire to kick puppies.”  The puppy-kicking-lust no longer dominates me.  I’ve been liberated from my slavery to this temptation.

That’s not the sort of freedom I’m talking about just yet.  But we’ll come back to it.

(PS: I have no desire to kick puppies, and never have.  You might say I was preserved from puppy-related sins from my very beginning.  For which I am grateful.)

Back to our Topic: The Oppression Impulse

The kind of freedom I’m talking about right now is the free-will kind of freedom.  That radical freedom that brings so much suffering on the world.  You and I, made in the image of God, are endowed with the ability to choose right or wrong, life or death.  It is dangerous and scary.  It is also supremely good, in that it is the thing that makes virtue possible.

Without radical freedom, that precious homemade birthday card given to you by that dear little child, the card with the weird stick figures on it that probably do resemble you more than you’d like to imagine, that card has no meaning.  Radical freedom is what makes it a gift from the heart, a sign of love.  That same radical freedom allows you to be the person who’d jump in front of a bus in order to save the giver of that card.

(Mostly you use that freedom to politely listen to one more senseless attempt at a knock-knock joke. Which, after a while, begins to make the bus increasingly appealing. But you use your choice muscle to resist that base urge to check the bus schedule.)

The trouble being that radical freedom gives us the option to be wrong and to do wrong.

What Place for the State in Protecting Us from Ourselves?

We mostly understand that the role of governments is to govern: To keep things under control.  We have laws against many of the kinds of murder, because we know that killing innocent people is wrong.  We have laws against slavery, under our new improved efforts at living the constitutional life, because we know that keeping people as chattel is wrong.  The law exists to assert morals, there’s no way around it.

The US Constitution is different than other forms of government in that it rejects the notion of preemptively saving us from ourselves.  Murder is illegal, but the Constitution says that the state may not preemptively swoop in and deprive you of all your could-be murder weapons, on account of how you might maybe choose to use them badly because other people sometimes do.  There’s a direct link between the right to bear arms and the notion of “innocent until proven guilty.”

Good law also strikes a balance in the severity of the moral infractions it enforces.  Lying is evil, but not every lie is illegal.  The law restricts itself to prohibiting certain kinds of lies — perjury, forgery, breach of contract — but does not involve itself in your duplicitous dealings concerning the Easter Bunny and who ate the last slice of cheesecake.

Much of the debate over religious liberty, or any other civil liberty, comes down to deciding: How serious is this matter?

The Current Challenge to Religious Freedom

The United States is going through a phase, culturally, where what we want is for everything to be fixed, and we want it fixed our way. Rampant STD’s?  Let’s fix it via a massive mandatory vaccination campaign, since telling people not to sleep around would impinge on our dearly held value of sleeping-around-is-important.  Low graduation rates? Let’s fix it via a bigger, meaner, stricter compulsory education program . . . these programs have never actually succeeded in causing restless, immature teens to value education, but the thought of letting a 16-year-old work for a few years until he comes to his senses* is unthinkable.

[Yes, now I’m getting specific in my combox testing.  You’re going to tell me that it’s important we mandate your favorite cause, because There’s No Other Way.  Thank you for proving my point.  We are a fix-it culture, and we want it fixed our way.]

It is currently unthinkable that a woman could be given a health care savings account into which to funnel some of her wages, and be trusted with the choice as to whether she wanted to spend that money on contraceptives or not.  We must have employers buy her the contraceptives directly!  It is the only way! The method of paying people money and letting them decide how to spend it is not an option!

That’s the threat.  Previous generations of Americans worried that their fellow citizens were not religious enough. This generation worries they are too religious — or more accurately, the wrong kind of religious.  We’ve traded out one religion for another, in our trendy faith-that-must-be-embraced thinking.  That the New Think isn’t called “religion” doesn’t change what it is: A set of beliefs about the world and about morality.

Do you believe in religious freedom?  Probably not.  It always was a crazy idea.

*It was not unthinkable a century ago.  Time was, public high school graduation ages varied from as young as 14 to as old as early-twenties.  You went when you could, and graduated when you’d mastered the material.  I know.  Crazy.  Knowledge of history will do that to you.

March 26, 2014
What Makes a Catholic Book Catholic?
Next Post

March 27, 2014 How Can the Spiritually Flabby Be Helped?
Recent Comments
0 | Leave a Comment
Browse Our Archives
get the latest updates from
Sticking the Corners
and the Patheos
Catholic
Channel
POPULAR AT PATHEOS Catholic
1

On the Patriot Front's Appearance at...
Steel Magnificat
Related posts from Sticking the Corners

Catholic
Hidden in Translation: Downplaying the Seriousness of Civil...
Sticking the Corners

Catholic
Resolutions, Rebranding, and the Body You Have
Sticking the Corners
TRENDING AT PATHEOS Catholic