If It Doesn’t Cost You Everything, You’re Not on the Little Way

I once made a mother cry by telling her it was the vigil of the Feast of the Immaculate Conception.

I thought I was doing her, and all the other 5th grade religious education parents, a favor.  We had failed to account for the feast in making our class schedule.  I knew that most of my students would not be able to slip out for a noon Mass on the day, and many had mandatory school activities in the evening.  But look! A vigil mass was scheduled during my class time, so please, parents, come grab your kid at 6:45 and go to Mass tonight, no problem!

That was the theory.

And this poor mother saw the sign I’d posted on the door to my classroom and burst into tears.

She wasn’t even the Catholic parent, but she was driving her kid to religious ed every week because she wanted to do the right thing out of respect for her husband.  She had a newborn baby.  She had out-of-town guests.  She was exhausted.  She literally could not be the one to get her daughter to Mass anytime in the next 24 hours.   She had no idea there was a Holy Day of Obligation, or she would have planned differently, but no one had told her.

She was working so, so hard to be a good wife and mother, and someone had just posted a big FAIL sign on the classroom door.

One of the realities of chronic illness, but it’s true for any number of other difficult situations, is that small victories are huge. For other people, ______ is no big deal, just something you do.  Oh sure, a little effort maybe, but it’s hardly worth writing home about.

The good thing is that it keeps you grateful.  I guess if you were always whiny before, a womping dose of misery won’t do much for you. But if you were in the habit of appreciating the small things, you’ll appreciate them that much more when you have to work so hard for them.

It’ll be worth it. Yes, doing ______ for the kids is a sacrifice, but that’s what parenting is. It will cost in so many ways, but that’s what we’re here for, to give of ourselves, right?  It’s okay.  We’ll give cheerfully from our meager reserves and not keep tabs.

The peril, though, is in the crushing weight of unexpected defeat.  To have given so much in order to do that one small thing, a small thing that maybe you only dreamed of before, and suddenly there’s an opening and you can do it, and you guard your heart knowing that it might come to nothing, and then it works out after all, and you’re so stinking excited at this dream come true that for everyone else is just normal life, but for you it’s enormous — enormous!

And then it’s gone.

And then you’re that lady bursting into tears at the classroom door.  And people must think you’re nuts, because why should some small thing make you cry?  But you’re not nuts.  It wasn’t a small thing after all.

Behind every story there’s another story.  Here on the Feast of St. Therese, we’re supposed to be all about doing small things with great love.

It’s a dangerous way to live.

Don’t kid yourself.  If you can do a big thing, quit dithering and go do the big thing. Because until you are living at the edge of everything, you cannot understand the human soul.

Great love costs.  It’s not the size of the thing, the bigness or the smallness, that is the marker of the Little Way.  It’s the cost.  If it didn’t take your whole self to make it happen, it was only a warm-up exercise.

Flirt with the dangerous life.  Go out a few times.  Then settle down and get married to something so good it terrifies.

When it feels like you are wheat being ground on stone, like grapes being pressed into pulp, that means you’re doing it right. 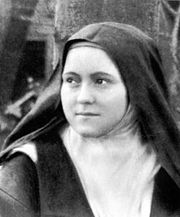 October 2, 2014 Waffle Syndrome and the Betrayal of Barb Webb
Browse Our Archives
Related posts from Sticking the Corners