Inside Our Homeschool – What We’re Doing This Year

What I’ve been doing instead of blogging lately is getting ready for school — organizing the house, buying books, writing up the calendar.  No, this is not one of those posts where I explain that this is the very best method and your children will rot if they do something else.

–> FYI If you’re also posting your non-hubris-laden plans and I don’t regularly read your blog (or I fail to read it this one time), you can tweet it to me @JenFitz_Reads.

If you don’t want to read about every single book we’re using, skip down to the math story at the bottom.  People who homeschool will especially appreciate the magnitude of the pending Saul-on-his-way-to-Tarsus thing that happened.

He’s enrolled in Kolbe Academy’s online school for everything core-academics except science. To my pleasant surprise he asked to take Latin I, so he’s switching languages (last year was French I).  We’re super happy with the decision to go with Kolbe for him, it’s a good fit.  For science this year he’s going to take some computer programming courses, per his goal of getting some IT certifications under his belt.  He’ll pick back up with the lab sciences at Kolbe or the local community college for junior and senior years.

We’re doing a 1-semester-credit economics course with some friends, meeting once a week over the course of the year.  It’ll cover personal finance (Dave Ramsey version), then traditional Econ 101 via Compass Media’s Basic Economics.  Neither of those programs are themselves Catholic, but you can count on me to insert necessary commentary to adjust as needed.  We’ll wrap up with a survey of what I think are the big encyclicals you need a working familiarity with (starting with Rerum and ending with Laudato, big surprise).

Going along with that is a debate-club portion of the class.  Kids will start by working through The Fallacy Detective and warming up their arguing skills that way.  Second half of the year they’ll prepare a couple of debate pieces.  Some of the debaters aren’t in the econ class, but for those who are, they can use their debate topics as research reports for a component of the economics class.

I’m so stinking excited about this class.  More fun than anyone should be allowed to have on a Friday.

The boy’s continuing with piano and classical choral for fine arts, and a combination of outdoor sports (mountain biking, hiking, general fitness) for PE.  We don’t count shooting sports in PE, but that’s just so that administrators don’t faint when they see it on the transcript.  Auto Upkeep is on his to-do list as a parent-mandated prerequisite for a driver’s license, but the parents have no required time frame, so it might not be this year.

All three girls are using Language of God from CHC for their grammar and composition.  We used this last year, and the workbook format is very handy for me for recordkeeping.  I like the way CHC’s textbooks integrate the faith: Catholicism-as-normal-life. (The old Voyages in English had the same merit — I liked that one, too, no complaints, we just needed to transition to workbooks for ease of use.)

6th and 4th graders are using My Catholic Speller from CHC, which wins points with me for including words like “monstrance” and “transubstantiation” on the spelling lists.  In the older grades the spelling words are written in cursive, which is either good practice or the bane of your existence, depending on whether your child can read that stuff.  I vote “good practice.”

They are also both doing MCP Plaid Phonics, which has been a longtime winner around here. I like the way it takes words apart in 7,000 different directions.  Word Surgery is a subject, in my book.

For handwriting my 6th grader is finishing up Cheerful Cursive (I liked this very much), and then following with CHC’s Handwriting Level 4, which doubles as my consolation for the fact that the girls won’t have any formal Latin going on this year.  (They get their share at Mass, though, so their brains won’t completely melt in one year.)  4th grader is doing an intro to cursive with CHC’s Handwriting Level 3.  What sold me on switching first-year cursive programs was that CHC’s book has goofy riddles in them.

All three girls are continuing with Faith and Life. Of course.  The younger two are doing the sadly out-of-print Bible Story Workbook which is just plain fun and pleasant, and Map Skills for geography.

8th grader is using MTF’s The History of the Church for her history book.  True story: We had decided to keep working through The Catholic Textbook Project’s history series, which we like very much, but when I went to file my paperwork I completely forgot we had agreed on that.  We already owned the MTF book so it was in front of my face, and I’d been thinking she really needed a good Church History course, so I wrote it down on the forms.  She’s resumed speaking to me, so it’s okay.

The two younger girls are unschooling literature, because I have trouble with them reading all the “literature” selections ahead of time.  Good problems.  8th Grader is doing CHC’s The Secret Code of Poetry.  It looks promising.  We have an attitude problem at our house concerning poetry, and I’m hoping this can be the year we fix that.

8th Grader is continuing with CHC’s middle school Life Science text, which we did half of last year (she had some other science things going on to, get up off your fainting couch).  We’ve had good luck with getting together with friends to do the labs, so I’ve got two lab-weeks penciled in, one for fall, one for spring.

Because our science-friends have a 6th grader doing Behold and See 6, our 6th grader is doing it too.  That’s the reason.  But it’s a beautiful book and I do like it.  The book is divided into three units, and we’re doing them out of order.  We’ll start with Unit 1, physical science, then skip ahead to Unit 3, astronomy, because it’s easier to do astronomy labs when it’s winter and it gets dark early.  Then we’ll go back to Unit 2 (habitats-n-animals-n-stuff) in the spring, which is when it’s nicer to go to the zoo.

4th grader has a co-op science class, and I think we have a couple science books she hasn’t read yet.  This is why God ordained that there should be libraries, because one science book a year is not enough, she says.  Give me another one, she says.

Also: Everybody Always Does a Science Project That Is The Law.  SuperHusband has made no firm dictate on this year’s plans, but he’s eminently predictable, so I say February sees us studying Physical Science, again.  Life Science projects take too long, we need things that can be studied in exactly six hours on a Saturday before the Science Fair on Tuesday.  I should start looking around now for deals on double-sided tape for Mad Monday, when all the displays get made.

Other Stuff, Not Counting Math

All three girls are in strings (violin, viola, cello), eldest does classical choir too.  (So again, not entirely Latin-deprived).  Older girls’ co-op is going to include some assorted fine arts, a book club, and I forget what else. Good fun things.

They are all participating in varying amounts of volleyball; the youngest has also taken to going on a bike ride with me every day, and she’s going to have PE in her weekly co-op, too.  Hiking kicks in wherever volleyball doesn’t.

I’m going to have to suppress the craft factory so we can get school done (my children have a bad habit of sneaking away from their books in order to pursue their PhD’s in Pinterestology.)  But in the meantime, the knock-off American-Girl-Sized dolls are getting school uniforms, new backpacks, and textbooks with calico covers.

Okay so this really crazy thing happened about math.  I’ve been perfectly happy with Math-U-See for many years.  I like the way it teaches concepts, I like the scope and sequence, I like the materials.  I had every intention of continuing with it.

Then I was ordering my books, and MUS’s server was malfunctioning. So I was delayed in placing my order.

Meanwhile, we’d already planned to hire a Math Assistant, because this is our weakest subject.  It’s the area where kids have the most resistance and parents have the least enthusiasm (see a pattern there?), and we’d determined that an Outside Force would be crucial to meeting our goals for the year.  Our fantabulous find was a willing homeschool mom (kids now grown) who was game for some part-time work.

She’d done Saxon with her kids, but we both agreed that math is math so it didn’t matter all that much.

And while I was waiting for MUS’s server to begin behaving, I grabbed a rosary and went for a walk, and ended up with Saxon On My Mind.  I’m not sure whether that counts as a distraction to prayer or the kind of penance you’re only allowed to undertake with a spiritual director’s supervision.

So I came home when it started raining, and surfed around, looking at Saxon.  Disadvantages:

My children held a flash-mob protest when I said the S-word, because of course they’ve heard all the tales.  They are homeschoolers, they are not sheltered from the dark secrets of the textbook world.  But I managed to quell the seething masses and persuade the opinion leader (8th grader) in time to hit “submit order.”

So it’s done.  We’ll see how it goes when the books get here. 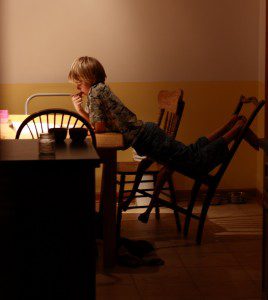 Photo of boy studying by Jon Fitz, all rights reserved.

August 14, 2015
Parenting Fail: Telling the World You Wish Your Kid Were Dead
Next Post

Catholic
YOU! Can Prevent Election Interference by Foreign Social...
Sticking the Corners