How to Teach Kids about the “Straw Man” Fallacy

Point them to the internet.

In class this morning, the kids got their formal introduction to Mr. Straw.  We’re working through The Fallacy Detective, and the way we do most chapters is that the kids read the text at home, we discuss the definition of the fallacy, and then the kids each contribute an example they’ve either invented or endured.  We do assorted exercises to practice identifying the various fallacies we’ve studied and to distinguish them from legitimate arguments.

Because of the flood, we had to race through two classes in one in order to stay on track with the syllabus for the year.  Last on the list this morning was the infamous Straw Man.

The kids, of course, grasped this one intuitively.  They see it all the time.  What with literacy and a presidential campaign on, it’s virtually unavoidable.  If you’re in Catholic blogging, it’s the pollution lacing the air you breathe.

So here’s the thing that I didn’t have to spell out in class, because teenagers are smarter than anyone lets on:  All the other fallacies have valid kinsmen.  An ad hominen is a bogus argument, but there do exist situations in which the opponent’s character is relevant.  A tu quoque may be illogical, but it does pose a question that deserves to be explored — why exactly does the opponent fail to follow through on his own advice?   But the straw man lies alone.  That’s just someone being stupid.

Want to wade through the dreadful morass and find good things to read?  Here are some links for your edification. I’m always posting stuff like this on my @JenFitz_Reads Twitter feed as I find it:

Meanwhile, if you are experiencing the natural anxiety that anyone feels when a large group of bishops leave their sees, where they are usually so safely dispersed,  and gather together like a swarm of bees attracted to a controversial topic, consider praying to St. Nicholas the Wonderworker, patron saint of people in a pickle.  He knows your pain. 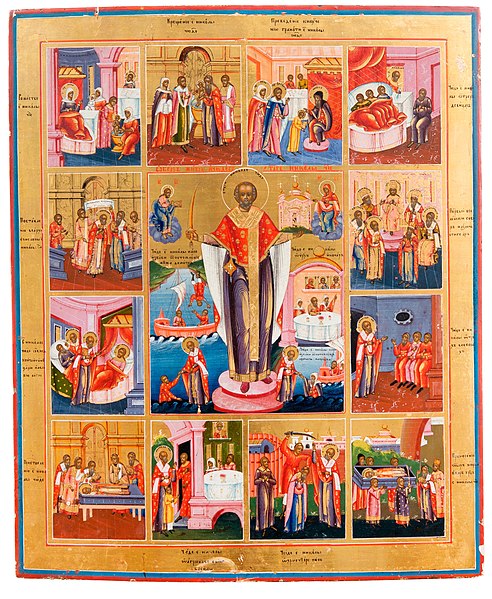 Artwork:  St. Nicholas the Wonderworker, with scenes from his life. Tempera on woodpanel. Vetka, Russia 1850s. [Public Domain] via Wikimedia.  Well worth clicking through on the image and then zooming to appreciate the detail.

M. is for Merciful.  If you want to meet a man who loves Jesus and radiates that love, spend a few minutes with Father M.

October 17, 2015 The Coolest Thing About Being a Catholic Writer . . .
Browse Our Archives
Related posts from Sticking the Corners