On the Forming of Young Christians

The plan, if all my paperworking comes to fruition, is for 4/4ths of my children to undertake radically different modes of education next year.  Said plan involves one parochial school, one public school, and one homeschool (mine).

This is by no means the first time my husband and I have changed tack in our children’s formation.  One would hope that my 15-year-old is not receiving the same sort of formal education we started with when he was five (though there are fascinating similarities).  It certainly isn’t the first time we’ve outsourced some portion of our children’s education to friends or strangers.  It is, however, our first time making the jump in legal status and social status that comes with a change in the answer to the question, “Where do you go to school?”

Thus I wish to talk about the idea of Christian formation.

To form something requires force.  By force, though, we don’t need to mean violence or coercion or any sort of unpleasantness.  I can be formed, changed for the better, by the forces of my friend’s love, her good example, her kind words.  Think of a potter forming clay: The artist takes in mind the qualities of the clay and chooses ways of shaping and changing the clay until what was once a lump of wet dirt becomes something entirely different.

Humans, of course, are not lumps of dirt.  We parents aren’t artists who bring handfuls of mud into the world for the purpose of one day having better knick-knacks on the occasional table.  We do, however, get to choose some of the forces that will be exerted on our children, and those forces will have their effect in shaping the people our children will one day be.

Thus when I think about my children’s formation, what I am thinking about is what sorts of forces I want to add into their lives.

Children, meanwhile, are forces themselves.  When I ask, “What is the best course of education for my son?” I have to consider not only what his school or his textbooks or his teacher will bring to the classroom, but what he himself will bring.  What kind of boy is he? What kind of response will he have to this mode of education or that one?

When he was five, the answer to that question led me to institute fake reading lessons. He was a boy who wanted to learn to read, but who had not yet acquired the cognitive agility necessary to pull off the task.  We stalled by practicing our letters and reading lots of books aloud, but never quite moving on to the actual reading of words until the force that was his brain reached the appropriate point of development.

When he was seven, the answer to that question led me down the library stairs to adult non-fiction, for the force that was his brain had no use for easy readers.

I don’t therefore propose that the Osprey military history series be laid down as the standard fare for middle-elementary school.  I do propose that when choosing books for your children, you consider what sort of children they are.

Imagine for a moment that you knew a young woman who’d recently returned to the Catholic faith after years away from the Church.  What sort of formation would you propose for her, to help her grow in her newly-rediscovered faith?  Imagine she lived in one of those Bible Belt towns where the most vibrant corners of the religious scene were dominated by Evangelical Christians who pulled disaffected Catholics into their folds by droves.

Were I advising her, of course I’d suggest she seek out Catholic friends to help her grow in her faith.  I would never prescribe a course of formation that consisted of spending the bulk of her free time among non-Catholics and even avowed anti-Catholics.  I wouldn’t suggest the best way to strengthen her faith would be that she regularly seek the company of people who considered Catholicism strange and unnecessary at best, and likewise the company of those who were actively seeking to rescue her from the Catholic faith.

But we are each a force in ourselves.  Having been that girl, and having spent the first ten years of my return to the Church in just that environment, I am entirely certain that had I not been subject to the intense and unremitting force of my non-Catholic Christian friends, I would not be half the Catholic I am today.

I still don’t advise people to seek Catholic formation outside the Church — but my own life is a testament to the strange ways that we can be formed for the better by forces that ought to have done just the opposite.  Think again of that clay.  There are times when a good pounding or scraping is just what the future vessel requires.

Where is God in all this?

When I consider my children’s formation, I have to recognize two terrifying forces in their lives: My free will and theirs.

God leaves me free to make harmful decisions on their behalf.  I can choose the wrong course out of willful ignorance, out of laziness, out of selfishness.

They, too, have the freedom to respond to the perfect education with perfect wretchedness.  My husband and I and the Lord together could each of us do everything just as we ought, and our children remain free to reject it all and go their own way.

God doesn’t promise us the ideal.  We must choose among a small collection of imperfect options.

He likewise doesn’t promise to sweep up behind our every freely-chosen sin, no-harm-no-foul.   As complex and personal as educational decisions are, there remain wrong decisions.  In trying to choose what is “right for us” I don’t therefore say that any choice is just as right as the next.   My ability to make good decisions for my children is only meritorious inasmuch as I’m also able to make bad ones.

So: Christian formation.  I have a house with four young Christians in it and two older ones.

If you ask me why I’m changing course for the coming year, the answer is not complicated.  We’ve taken stock, as best we can, of the genuine needs of our children and their parents over the next year or two, with longer-term questions in the backs of our minds.  We’ve looked at our set of options as best we know them, and considered what forces for good or ill each offers.  We’ve considered how each choice might weigh on the others, for I am not educating four isolated individuals, I am educating four children whose lives are intricately intertwined.

After all the observing and thinking and reassessing were done, we picked among our several options, lived with them a bit, and reviewed them again.

Because we are not omniscient, we can’t know whether we have chosen perfectly, and we cannot know whether some radical life change awaits us in the years ahead.  We can anticipate some of the counter-forces we’ll need to bring alongside (an earlier bedtime comes to mind), but as always we’ll simply have to see what happens and adjust as needed. 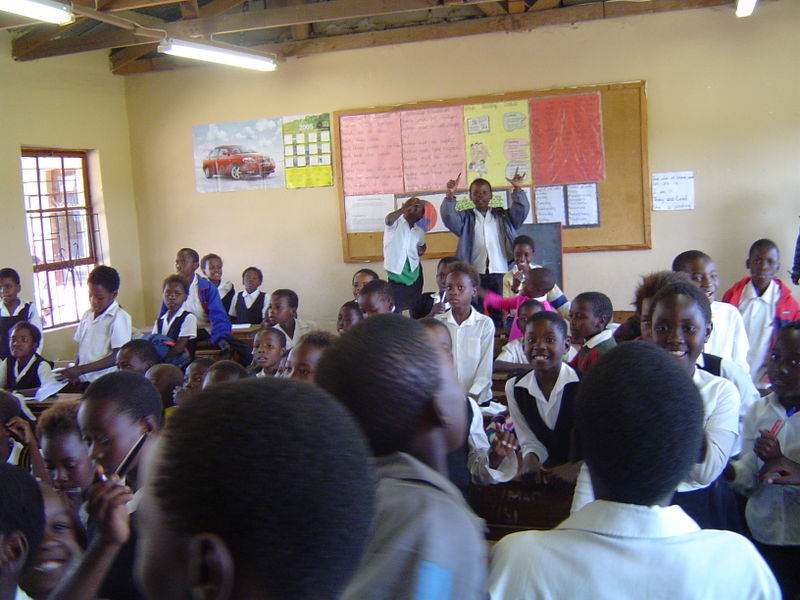