Church Militant is not my usual haunt, but they deserve credit for publicizing the case reported at Save Our Seminarians. I am well aware that false allegations happen and therefore jumping on a bandwagon is not wise.  However, this case caught my attention because of the large number of people allegedly involved, on all sides of the case:

Just before my departure for surgery, I witnessed inappropriate physical behavior committed by vice-rector Father Adam Park, a priest of the Archdiocese of Washington who was ordained by ex-Cardinal McCarrick and was later secretary to Cardinal Wuerl. Father Park initiated this contact with a seminarian assigned as his advisee (as such, Father Park had power over whether or not this seminarian would advance toward priesthood). The seminarian later divulged to me that Father Park made other physical contact described as “hurtful.” I also received other reports among NAC classmates alleging inappropriate behaviors by the vice-rector. One classmate, apparently distressed by his own knowledge, stated to me the urgency of reporting and investigating what multiple students have known and observed of Father Park. I was also informed that a seminarian was portraying behaviors of “crying out for help” during a formation conference on sexual abuse of power. . . .

. . . Amid pleas and messages that have emerged from the NAC stating that “the time is now” for action to be taken regarding Father Park’s reported behaviors, and directed by evidence and testimonies that have come forward from seminarians, I or other concerned individuals have felt morally obligated to report this case for over a year-and-a-half to the following responsible officials:

Despite urgent requests to these clerics for an investigation and Church laws regarding mandated reporting, the matter has been left uninvestigated by Church officials.  Some among this listing have even denied knowledge of these reports, despite signed return receipts confirming delivery.

We could begin with copies of the documentation. If only ten percent of the alleged paper trail could be produced, it would be quite the paper trail.  Keep in mind that when complaints like this are circulating, in addition to formal documentation, there are texts, e-mails, or phone records (time stamps) of conversations held among those who are agonizing about what to do.

Civil law, likewise, has its limits.  Sexual harassment claims or other legal remedies depend on specific persons breaking defined laws in the jurisdiction where those laws apply.  It is possible that some or all of these seminarians find their situation falls into a legal no-man’s-land where no particular law protects them.  We’re speaking of adults, not minors.

Who is left with the incentive to investigate? Lay Catholics who care about the Church but are not dependent upon the Church.

Staff and clergy get one chance in a lifetime to be the whistleblower, and it’s a chance that comes with a forced career-change.  Furthermore, understand that many of the small acts of habitually covering-up or keeping-up-appearances are acts that are not in themselves illegal.  Yes, there are egregious crimes that are cut and dried situations. But these occur in a milieu where ordinary bureaucratic ruthlessness may prove an administrator has no love for daylight or fairness, but no specific laws were violated.  Remember, also, that predators like to clear the area of potential interference.  Add to this problem that any Christian of good will would want to avoid ruining someone’s good name, and will be reluctant to act on rumors that may well be false.

Related: The Disconnect After You Realize Abuse is Happening

Anyhow, I don’t have magic on this.  I do know, though, that on-going corruption and scandal is causing the faithful to leave.

I don’t mean, here, people who identified as Catholic but never possessed much of a faith in her teachings.  (I used to be that person, and sure enough, I found that was not sufficient reason to stick around.) I mean here that I am seeing more and more truly faithful practicing Catholics — people who have been following the hard teachings, doing their best to live according to God’s plan, faithfully attending Mass every week, going above-and-beyond in their spiritual walk, and often doing so with very little support from their parish — I am seeing many departures.

The straws that break people vary.  For some it’s clerical abuses. For others it’s horrid behavior among lay Catholics.  And that inspires in some sense a need for complementary remedies: If lay people who claim the name of “faithful Catholic” are creating scandal by their blatant disregard for the moral law, it’s the role of clergy to speak up and proclaim the teaching of the Church in word and action.  Likewise the reverse: If the clergy are creating the scandal, then the laity are who’s left as a check.

We the laity are capable, if we work together, of investigating allegations like the ones above, and we are capable of creating landing places for discarded priests, seminarians, and religious to build new lives for themselves after they are persecuted for whistle-blowing.  It’s too big a job to be done by one person, and too important a job to be left solely to one faction or another among the increasingly fragmented faithful.

So, as I said yesterday (temporary transcript draft can be found here), fast and pray.  We are far from done with the stream of scandals.

Can’t get enough of me?

If you missed yesterday’s talk, the link trail begins, for the moment, on OSV’s “Upcoming Webcasts” page.  (It will eventually move to the “Recordings” page.)  Click on the “Register Here” link, and fill in the registration, and you will be given immediate access to the webcast.  You can view it as if you were sitting in on the original, including making such wise decisions as choosing to put my lovely slides front and center and my talking head in a smaller, more palatable box.

Unfortunately this software does not create captions or transcripts, and so I will get transcripts of the audience Q&A posted as soon as I can.  The text of my prepared talk, which is the first 35-40 minutes, including what I had to say about healing the wounds of scandal, are already posted; it’s only the last ten minutes of audience questions that aren’t written down yet.)

In other news: My books arrived!  Very excited about that.  Still astonished to discover I’m the author of this thing. 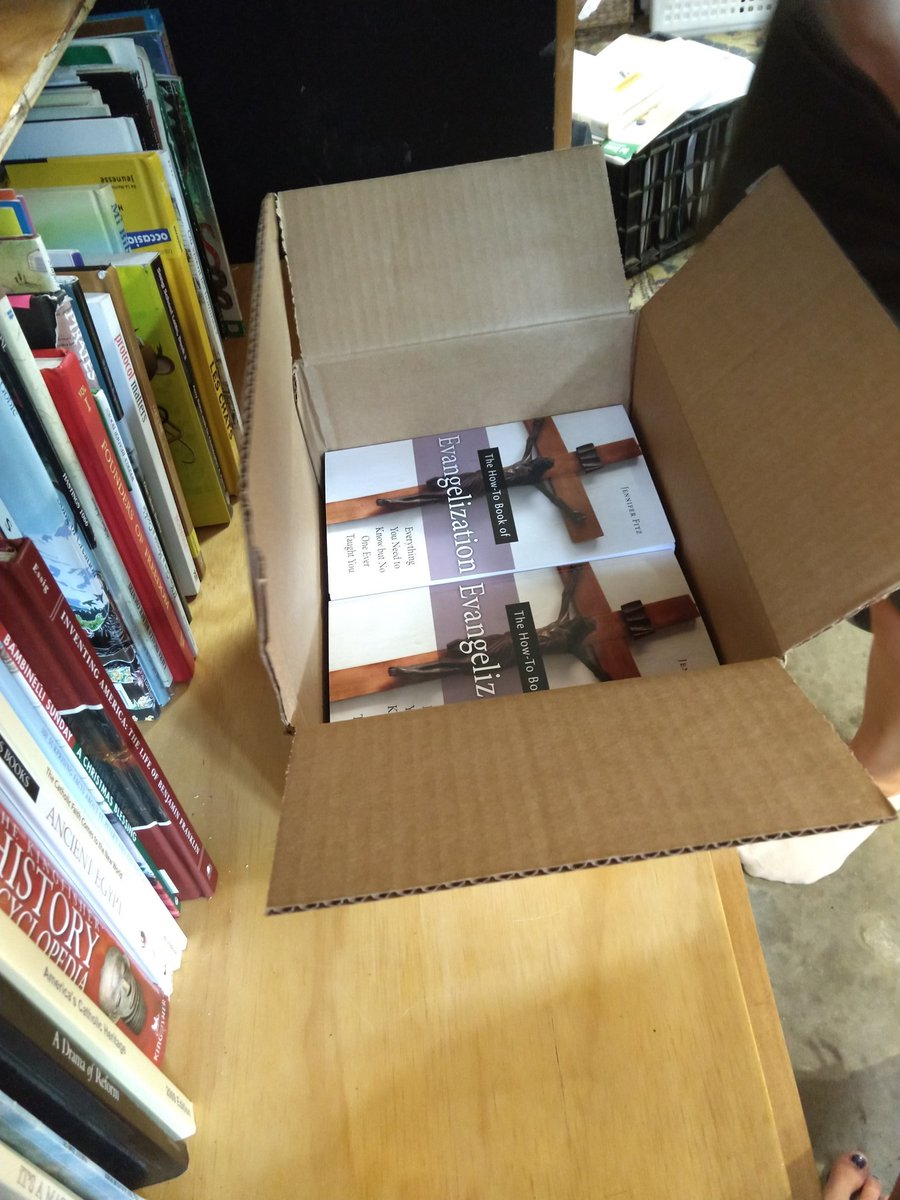 July 10, 2020 Education vs. Childcare vs. Public Goods
Browse Our Archives
Related posts from Sticking the Corners