Those of us who lean conservative have a knee-jerk tendency to ask, “Can anything good come out of California?” Hence a recent spate of gloating over the prospect of that state waking up New Year’s Day 2022 to a bleak, bacon-less dystopia caused by 2018’s Proposition 12 ballot initiative.

If you aren’t familiar with the law, here are three articles that provide varying perspectives.  If you only have time to read one, go with the piece from Civil Eats, as it has the most thorough reporting of the three:

Longtime readers may recall that I’m pretty happy with not having to keep kosher. Still: I’m not convinced California is wrong on this one.

Here’s the key line in The Catechism:

2418 It is contrary to human dignity to cause animals to suffer or die needlessly.

Key word here is needlessly, and on that point Catholics of good will are free to hold different opinions about the details of California’s new law.

I think it’s important, though, to acknowledge that just because one’s usual political opponents are consistently wrong on any number of very serious matters, it doesn’t follow that therefore they are always wrong.

California has a horrendous record on protecting unborn humans.  Absolutely abominable.  Frankly living conditions for the born-humans aren’t consistently all that impressive either, a reality hinted at by the steady out-migration of California residents to other parts of the country.

Still, it’s honestly not unreasonable to think that, say, a pregnant sow ought to be able to turn around in her pen.  I like cheap bacon.  Really do.  But if it’s possible to feed the nation without inflicting needless suffering on the animals who give us all our tasty meat, then we are obliged to do so.

And in that regard, the California experiment isn’t half bad: If it works out, everyone wins.  If it turns out that no, it’s actually not possible to feed the country given such restrictions on production methods, then we can find that out through a relatively small experiment rather than pulling the whole nation into famine.

The Humane Society put together this pdf compendium of quotes on Catholic teaching about animal welfare. Some sources in the document are more authoritative than others, but the wide variety of authors cited includes a little something for every taste across the spectrum of church politics.

And for a palate cleanser, immerse yourself in years of blogging from the homesteaders at Bethune Catholic.

Seriously, conservatives: Don’t let your irritation at the woke-left cause you to abandon your own faith. 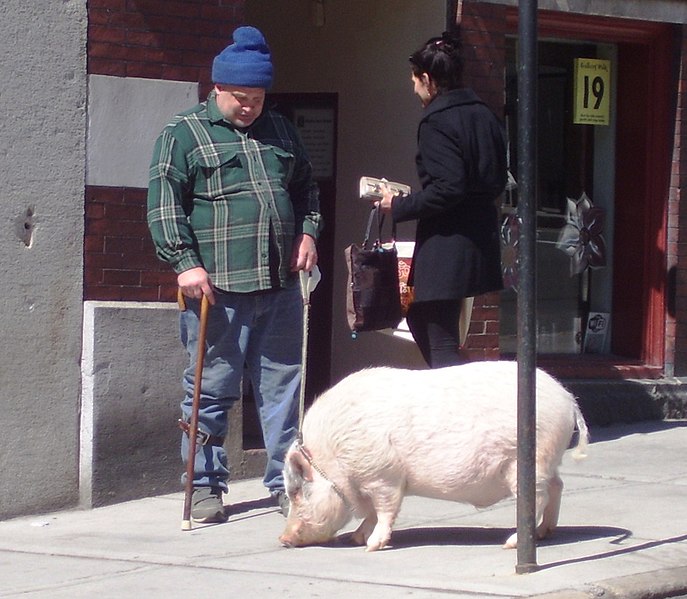 Photo of a man with a pig on a leash, on a sidewalk in Brattleboro, VT, courtesy of Wikimedia, CC 4.0. Photo contributed by Beyond My Ken.

August 12, 2021 Hyperventilating Over Gender Roles - And Harming Women While We're at It
Browse Our Archives
get the latest updates from
Sticking the Corners
and the Patheos
Catholic
Channel
POPULAR AT PATHEOS Catholic
1

Catholic
Field Notes on Dealing with COVID and Similar...
Sticking the Corners

Catholic
Hey, so, what's the #1 cause of accidental...
Sticking the Corners
TRENDING AT PATHEOS Catholic