Hyperventilating Over Gender Roles – And Harming Women While We’re at It August 12, 2021 Jennifer Fitz

In my goofing off today someone pointed me towards this study, “A Woman with a Sword? – Weapon Grave at Suontaka Vesitorninmäki, Finland”.  The actual research is pretty interesting, if you can get past the tiresome obsession with desperate searches for ancient cultures that affirm contemporary gender ideology.

The authors hypothesize the interred individual may have had Klinefelter syndrome.  If you’d like to think up a genetic hypothesis of your own, here’s Wikimedia’s list of disorders of sexual development, and of course there’s mosaicism and chimerism as well.

It’s also possible that archeologists have made an error in their categorizing of “masculine” and “feminine” objects, or that the objects that don’t match the sex of the deceased were items of significance that previously belonged to somebody else.

And finally, there’s the part about how other cultures have completely different approaches to what constitutes acceptable and problematic variations from typical gender norms, as we saw in the case of the cross-dressing saints.  Something like this seems to be what the authors of the study are eager to uncover, which is fine, within reason.

What’s not fine is couching a historical study in terms of contemporary terminology about gender norms and sexual mores.  If you want to understand medieval Finland, study medieval Finland.  It isn’t meaningful to try to shoehorn people from other cultures into your own worldview.  It just makes you look desperate for someone, anyone, to affirm your own insecure beliefs.

Almost, but not quite, entirely unrelated: The Quest to Recreate a Lost and ‘Terrifying’ Medieval Mead. Showed up in my feed-reader today, and other than the part where bochet is trying to kill you, seems like a nice palate cleanser for the armchair medievalist.

Lovers of English Beg You: Knock It Off with the “Chestfeeding”

Meanwhile, also crossing my desk this afternoon was yet another statement about “chestfeeding.”  I’ll let you google, everyone’s got one these days.

Let me teach you a word: Breast. The same word, in English, refers to the male or female anatomy, and it appears that it always has.  Here’s the KJV making middle school boys titter and girls blush with the Gospel of John, for example:

23 Now there was leaning on Jesus’ bosom one of his disciples, whom Jesus loved.

24 Simon Peter therefore beckoned to him, that he should ask who it should be of whom he spake.

25 He then lying on Jesus’ breast saith unto him, Lord, who is it?

26 Jesus answered, He it is, to whom I shall give a sop, when I have dipped it. And when he had dipped the sop, he gave it to Judas Iscariot, the son of Simon.

It doesn’t happen often (and is usually a sign of illness), but men can lactate, even.  The only people who don’t have breasts are those with amastia, an extremely rare condition and which does, I’m sorry to say, preclude lactation on the affected side or sides.  So, um, either you have breasts, in which case you can either breastfeed or simulate it, or you don’t have breasts, and it’s on to the bottle for you.

I guess since baby-hickies are a thing, you could get a baby to suckle on loose flesh of some other body part while feeding from a supplemental nursing system, but that’s a completely different thing than breastfeeding in general, and furthermore why restrict yourself to the word “chest” in that case?  Babies don’t, that’s for sure.

Anyway, my point here is that it is utterly ridiculous to say that “chestfeeding” is the necessary trans-inclusive word, since (a) males and females both have breasts and (b) if you are trying to get as close to breastfeeding as possible despite either naturally or post-operatively lacking breasts, your chest may or may not be involved.

Breast. You’re not twelve anymore.  You can say that word.  It’s okay.

Don’t House Violent Male Criminals Side by Side with Females

Finally, I don’t always link to the Women’s Liberation Front, but when I do, it’s because California has decided that rather than protect female prisoners from sexual assault, let’s just pass around the birth control?

Look guys.  I am for the humane treatment of swine. But don’t get on your high horse about ethical bacon and facilitate the rape of women.  Just no.  No. NO.

Trans, by the way, does have a solid chapter on the state of women’s safety in prisons in the US, Canada, and UK.  Good book. Can recommend. 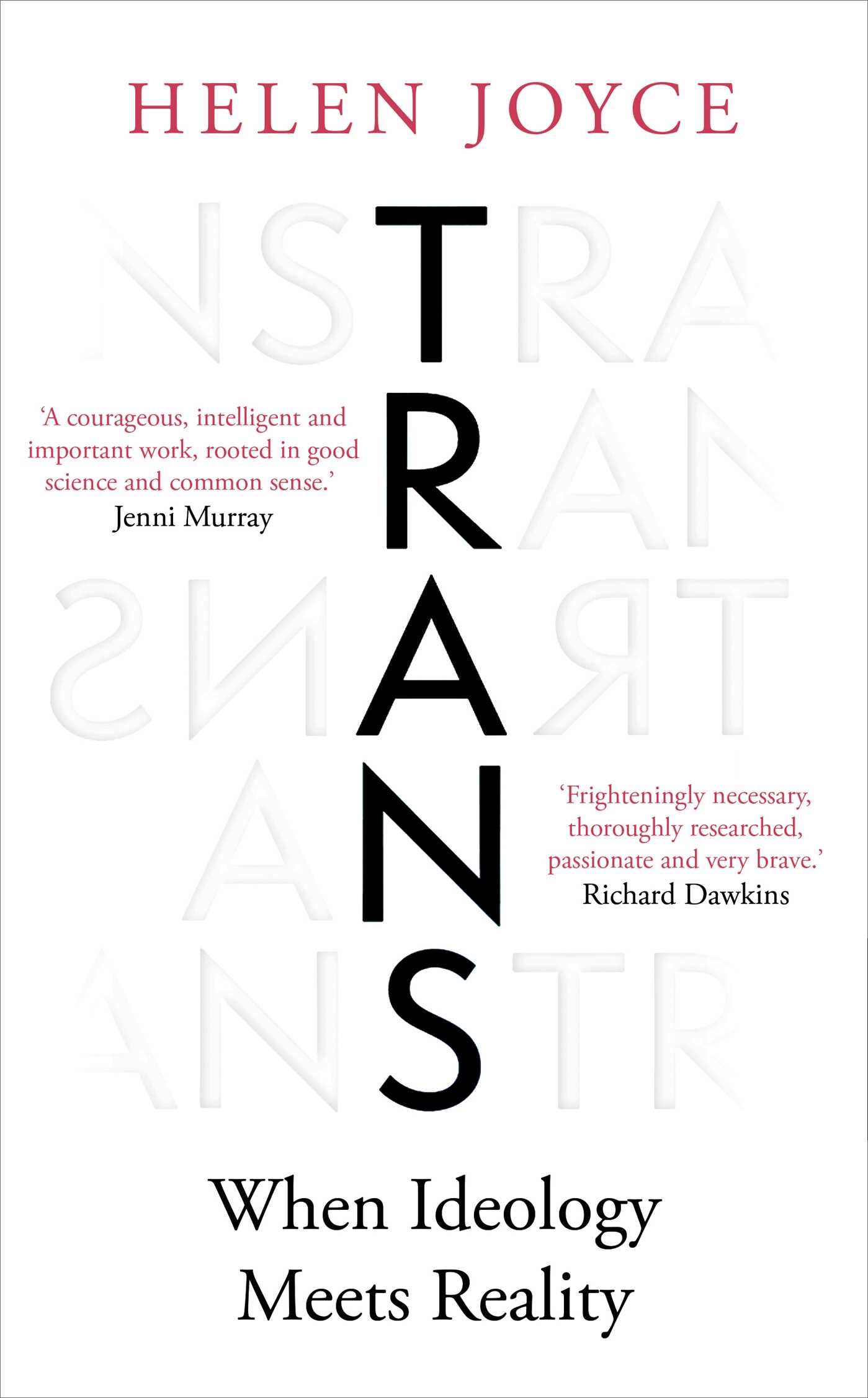 Cover art for Trans by Helen Joyce courtesy of Simon & Schuster. Not a Christian book.  Assumes you have a passing familiarity with gender politics, and assumes you are comfortable with studying the topic from a secular point of view.  If both of those are true, highly recommended.

September 6, 2021 Not a Fitness Blog, but . . .
Browse Our Archives
get the latest updates from
Sticking the Corners
and the Patheos
Catholic
Channel
POPULAR AT PATHEOS Catholic
1

Catholic
Field Notes on Dealing with COVID and Similar...
Sticking the Corners

Catholic
Hey, so, what's the #1 cause of accidental...
Sticking the Corners
TRENDING AT PATHEOS Catholic

A Weird, Great, Giant Russian Novel About a...
I review Mariam Petrosyan's The Gray House: "… The House demands a...
view all Catholic blogs
Copyright 2008-2021, Patheos. All rights reserved.