Hey, so, what’s the #1 cause of accidental death in children under 5? Anyone?

Hey, so, what’s the #1 cause of accidental death in children under 5? Anyone? October 5, 2021 Jennifer Fitz

Take at look at the photo Vox used to illustrate an article about remote workers: 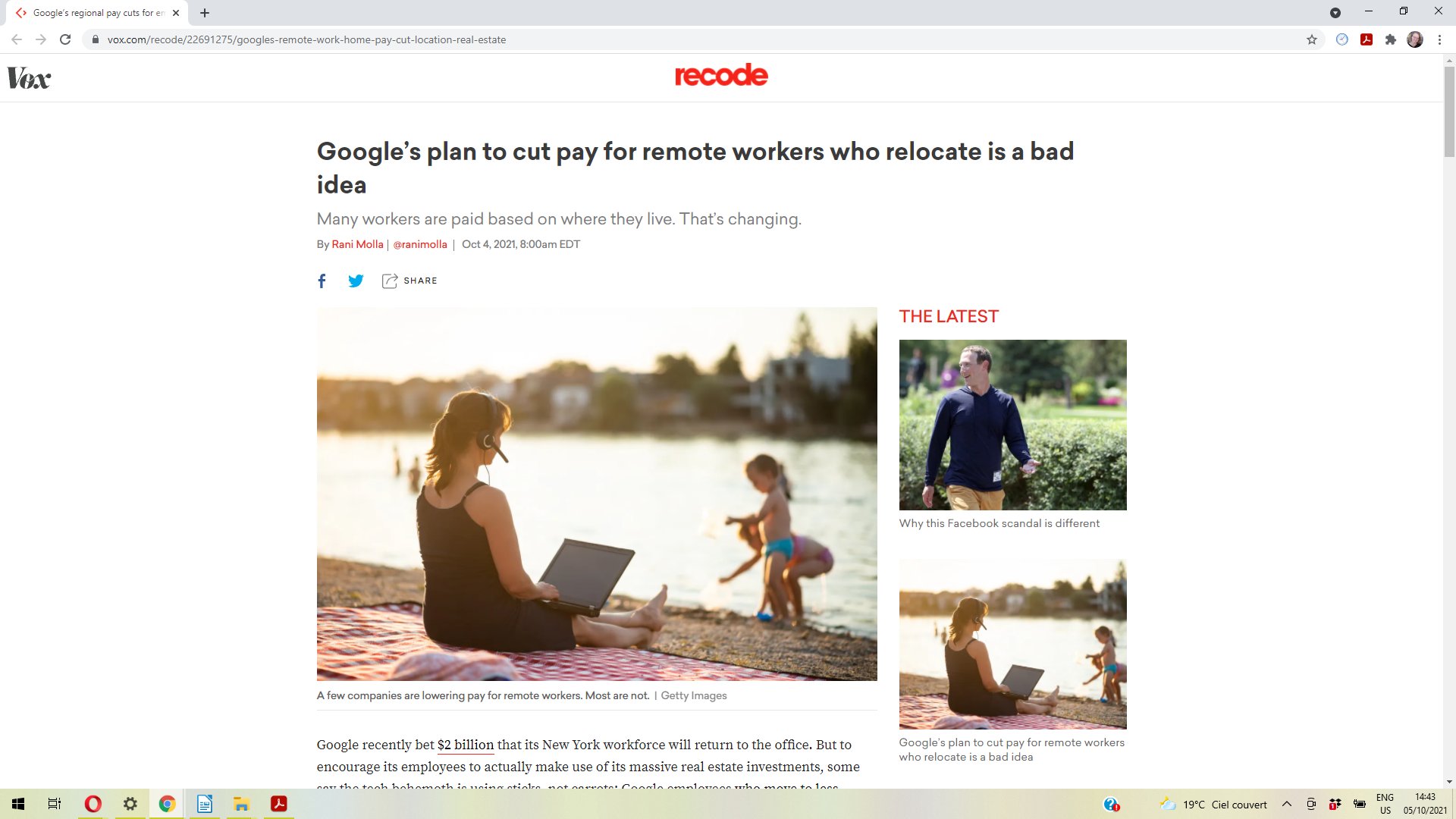 It’s a woman sitting on the beach with her laptop and phone headset, looking at two young children playing at the edge of a lake or pond (or some other flatwater).  Presumably it’s a stock photo designed to capture the idea of working remote.  Okay, sure.

Except: If you are the parents of an otherwise-healthy American child under the age of five, of all the many dangers you might worry about, this is literally the most likely cause of your child’s accidental death.

In other words: If you want to save young children’s lives, the #1 most effective thing you could do is try to reduce the number of drownings.

Repeat: If you want to save young children’s lives, the #1 most effective thing you could do is try to reduce the number of drownings.

How do you do this?  By making sure young children are adequately supervised around water.

I have serious, serious problems with Vox using a photo like this as an illustration for their remote-working article because it normalizes, however incidentally, what is in fact the number one cause of accidental death for children ages 1-4.  Would you illustrate your remote office scene with a stock photo showing dangerous firearms handling? A child not being properly secured in a car seat? A kid getting into poison while the parent is taking a work call?

I am uptight about this because this photo literally models the way your child ages 1-4 is most likely to accidentally die.  This is the picture.  This is exactly how it happens.

I know this because, as longtime readers get to hear at intervals, my kid was in that situation at the pool. She was four years old, playing on the wide shallow steps on a quiet morning after swimming lessons, not ten feet from where a lifeguard was on duty. She knew where she could safely play, and she was not a risk-taking child, she was a rule-follower.

She accidentally stepped into slightly deeper water.  As she silently panicked and struggled and started to drown, at any time she could have saved herself by reaching for a railing, the edge of the pool, or the step up, all of which were within her reach the entire time.

Because I was watching, I realized what was happening.  I got up, walked into the pool, picked up her and carried her deckside.  She was okay, because I went and fished her out immediately.  As I stood there holding my child, me dripping in my slacks and blouse, my leather shoes soaked, the lifeguard came down from his seat and approached me, concerned and uncomfortable.

I assumed he was coming to have someone listen to lung sounds.

He said to me, “Ma’am? I’m sorry, but you’re not allowed to wear street clothes in the pool.”

He was the lifeguard.  It was a quiet morning. My kid had been playing right next to him.  And he’d completely missed the fact that she had begun to drown and I had gone in and rescued her.  He had no idea.

If you’re on your phone, or reading your book, or checking your e-mails, you can very easily miss it when your kid starts to drown.  It doesn’t make noise.  It looks like a kid bobbing in the water.  And when you miss it, you will not be alone.  If the unspeakable happens, God forbid, your child will have died of the most likely cause of accidental death in children ages 1-4.

So no, this isn’t about parent-shaming.  If you’re one of the parents who has lost a child to drowning, you know that it’s just a painfully common, seriously dangerous thing that happens, and it can happen even when you do everything right.

And the thing is, as a new parent (or an experienced parent, let’s be honest), it’s hard to know what to worry about.  There are so many hazards, and you can’t raise your kid in a bubble because that’s not good for them even if it were possible.  Good parenting requires allowing a certain amount of risk.

So it’s easy as a parent to misjudge what the most serious dangers to your child are. Even worse: No matter how perfectly you judge, no matter how attentive you are, bad things can still happen.  Nothing you do can keep your child 100% safe.  Again: This isn’t about parent-shaming.  Not at all.

But still: Images of parents not watching their children near water are images of the number one cause of accidental death in children ages 1-4.

I’m not all “let’s cancel Vox” or “there ought to be a law”.  What I’m saying is: Let’s be aware that an image of young children playing by the water while the adults nearby are distracted is the iconic image of how young children die. It’s the picture.

And I’m the one who’s the crazy person for minding, because we as a culture aren’t honest about this. A TV show that has smoking for goodness sakes gets flagged in the ratings, because of the bad example it sets.  Understandably.  I don’t want my kids getting the idea that smoking is no big deal.

I likewise don’t want parents getting the idea that distractions at the pool or the beach are no big deal either.  I’m not saying smoke around your kids (please don’t), but your child would be safer if you had the cigarette but not the book, phone, or laptop in your hand as you watched the kids play in the water.

That’s just reality.  A publication like Vox should be taking that reality seriously.

October 14, 2021 Enjoying the Gender Neutral Life
Browse Our Archives
get the latest updates from
Sticking the Corners
and the Patheos
Catholic
Channel
POPULAR AT PATHEOS Catholic
1

A Virus of a Film: A...
Steel Magnificat
Related posts from Sticking the Corners

Catholic
The Healthcare Experience for Difficult Diagnoses
Sticking the Corners