So. About Those Right-Wing Extremists.

So. About Those Right-Wing Extremists. December 1, 2021 Jennifer Fitz

This morning I gave up on insomnia and watched Eric Zemmour’s 10-minute long YouTube announcement of his candidacy for the upcoming French presidential election.  I’ll be honest, the content surprised me a little.  I’m going to talk below about why, and how it relates to right-wing populist movements in the US as well.

The text of Zemmour’s speech is here on his website. Chrome’s translation function does an okayish job of producing an English rendering — don’t rely on it to tell you precisely what the speech says, but it’s enough to give you the broad outlines, which is all you really need for what I’m going to say below (and I’ll just say it, so you don’t have to click through if you don’t want to).  The video imagery does convey important information about the underlying meaning of the text, and Zemmour’s speech is remarkably straightforward language-wise, so if you’re an intermediate-level French student you’ve got a good chance of following the whole thing, especially if you use the transcript on his website (NOT YouTube’s comically erroneous auto-captions) to help.

Two updates on the video:

My comments that follow, meanwhile, are due in part to my very weird background.  I lived in France for a year in high school as an exchange student (so, attending a French high school, living with French families — very much immersed in the local culture), and later spent a year of undergrad studying modern (20th century) French political history at Sciences Po in Paris; US-French international relations was basically my topic for undergrad.  So there was a time, long long ago, when I had an undergraduate’s level of expertise (“expertise”) on contemporary French politics circa 1994.

After that I went on to completely different things, and hadn’t been back in-country until the epic vacation a few years ago.   My current level of engagement consists of following a smattering of Twitter accounts and periodically crashing and burning on Le Figaro’s little language quizzes.

So. Zemmour. Salon Beige kinda likes the guy, and that’s an outlet that runs to the right side of Catholic traditionalism, with a tendency towards all the same faults that are found stateside.  (I don’t read there for the anti-Semitism any more than I read Vox for moral guidance, thanks.) Thus when the mainstream media categorizes Zemmour as a xenophobic right-wing extremist, well, it’s not a shocker they take that point of view, and thus it’s not a shocker that the reporting this morning is pulling out all the plays from the 2016 effort to convince Americans that Trump was a big fat nothing-burger.

But y’all, I watched the video.  Zemmour is explicit in his nationalism, but what you need to understand is something I am saying in my capacity as a living time-capsule on the topic of French culture and French political culture:  The radical right-wing extremist agenda Zemmour presents to the French public in his video is nothing more, and nothing less, than an unapologetic appeal to mainstream French culture circa 1990.

I was there.  The images selected in that video, the choices of cultural references, even the choice to bring up industrialization and nuclear power . . . it’s just 1990 redux.  The implicit question he’s posing is this: What if the great questions of thirty years ago — and there was a lot of tumult simmering thirty years ago — had been answered differently?  What if we (France) as a nation had taken a different course? What if we had solved the big problems of that era in a different way?  Off the top of my head, the big three topics of the era were unemployment, immigration, and cultural identity.  The French were worried then, and all those worries have come to pass.

So in 1994 I set aside my interest in foreign policy and instead got engaged to this guy who was firmly settled in one of the reddest red-state corners of the US.  Good decision, but one which has afforded me many, many years of getting to decide whether to vote or abstain from voting for the many Republican sole-candidates on the ballot in our local elections.  I remember rejoicing when the Democrats finally started fielding candidates for US Congress again.  I live in exactly the kind of place contemporary American elites despise and attempt to crush.  (Personally, I just want a second candidate? Please?  And also maybe sidewalks?)

What I am seeing in the US populist movement that elected Trump, and now in the French populist movement that has brought us to Zemmour’s run for the presidency, is the implosion of the old political and social center.  Extreme right-wing racists, anti-Semites, and xenophobes are attracted to these movements, but they aren’t the reason Trump got elected, and they aren’t the reason Zemmour has whatever amount of traction that he does.  Populists get elected because they appeal to broad swathes of the public who just want things to not be that bad.

And this is what the elite do not understand: Things are that bad.

Our contemporary elites here in the US and in Europe have lost complete touch with the great unwashed who just want to live our lives.  The media is busy painting Zemmour as a far-right extremist, but his appeal is not directed to the extremes. His appeal is to normal people — people who just want to have a job and raise a family and mind their own business, but the elite can’t leave well enough alone anymore.

(Why did Republicans win Virginia? Because voters who otherwise don’t give a crap about other people’s personal choices do still insist their daughters not be raped at school.)

Unfortunately the unrelenting crushing of anyone who dares dissent from whatever elite orthodoxy happens to be this week means that moderates and centrists have little hope.  When JK Rowling is getting death threats for failing to toe the line, who exactly could be the centrist candidate?

So.  Lord willing we move past the corrupt power-hungry demagogue phase sooner rather than later, but that can only happen when it again becomes possible for moderates to speak and act freely. 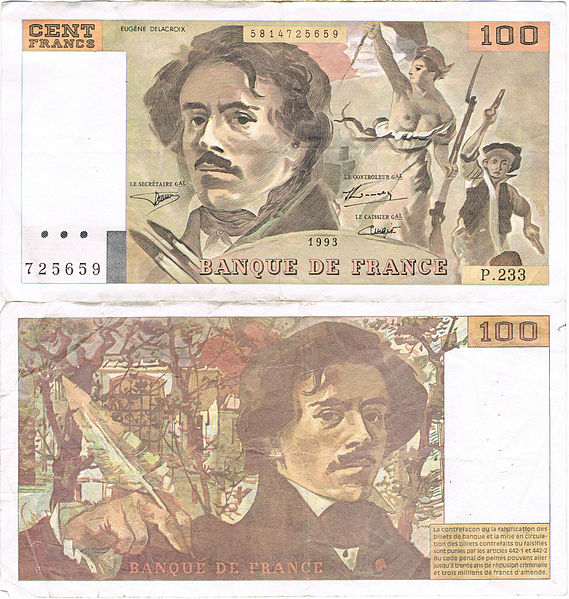 Image: Both sides of a French 1oo Franc bank note, circa 1993, featuring Eugène Delacroix.  Via Wikimedia, public domain.  Would have been about $20 at the time, and also the cost of one dinner out someplace decent but “inexpensive.”  Very painful for inadequately-privileged American students used to eating out for far,  far less at home. But were survivors, we managed somehow.

November 30, 2021
Of Course Prenatal Learning is Real
Next Post

December 2, 2021 Intergenerational Interdependence is a Blessing Not a Curse
Browse Our Archives
get the latest updates from
Sticking the Corners
and the Patheos
Catholic
Channel
POPULAR AT PATHEOS Catholic
1

Catholic
The Healthcare Experience for Difficult Diagnoses
Sticking the Corners