Yesterday I shared on social media a legal-opinion piece on a highly contentious social issue.

Within minutes, as I continued scrolling through my feed-reader, I saw that there had been a horrific shooting that appeared to be targeting the opposition-group in that same issue.

As of this writing, I haven’t seen specific information about the shooter and what that person’s motivations might have been.

That’s just as well, because: None of the victims of that shooting deserved to die.

No matter how wrong they were about their political or moral viewpoints, no matter how cruelly they might have treated “my side” of the debate, they did not deserve to be murdered.

Even if one or more of the victims were actually the guilty parties in the unjust situation that legal case concerned, in no way can the violence against them be justified.

Politicians like to whip up a sense of “crisis” in order to win votes. The media like to create a frenzy in order to attract revenue-generating viewers and clicks.  Far too easily, the general public succumbs to that fearmongering.

You don’t need to be part of that.

You can take seriously the very real problems that exist in our society. You can hold strong opinions about divisive issues. You can advocate for decisive action in response to serious injustices.

None of that requires, not even for a moment, justifying the persecution of your opponents, let alone violence against them.

Do you feel violent?

Sometimes when you see the evil going on in the world, evil that shamelessly harms innocent persons, maybe your anger boils up.

That understandable anger is not an excuse for violence. It is not a pass to say “Well, they had it coming” or “They asked for it” when your opponent is threatened or murdered.

Nor, if you are a person of peace and goodwill, should you feel any shame for your honest efforts, using legitimate legal and cultural channels, to fight for what you believe is right.

Your peacefully expressing support for a specific position in a court case, with regard to pending legislation, or for the general practice of a given set of moral norms does not cause violence.

Your peacefully sharing your point of view on a contentious issue does not make you guilty of anyone’s blood.

In contrast, if you do make calls for violence against your opponents, yes, you are a violent person.

If you say that violence against your opponents is justified, then yes, you do bear responsibility for blood that is shed because of your prompting. 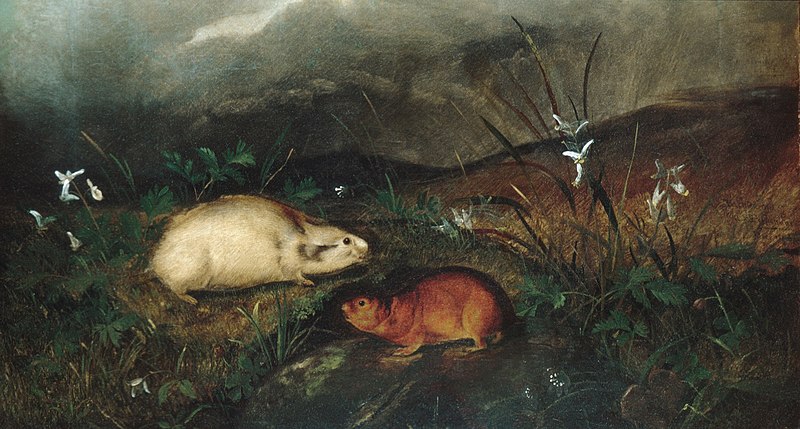 Artwork: Hudson’s Bay Lemming, painting by John Woodhouse, circa 1846, public domain. Wikipedia’s article on lemmings has some insight into our metaphor for today.

About Jennifer Fitz
Jennifer Fitz is the author of The How-to Book of Evangelization (OSV, 2020) and Classroom Management for Catechists (Liguori, 2013). Home base is at JenniferFitz.com. You can read more about the author here.
Previous Post

November 16, 2022
When "Medical Assistance in Dying" Comes After You
Next Post

December 2, 2022 A Movie Not to Miss: Devotion
Browse Our Archives
Related posts from Sticking the Corners