Earn Your Right to Meme: How White People Have White-Washed MLK’s Dream

We white people love to feel comfortable, and nothing can make us feel better about ourselves than some snippets of MLK’s I Have a Dream speech on a cold January day. Before you share your own well-curated meme on social media, I encourage you to do a little research. Because if you’re anything like I was prior to last August, you’ll be shocked at how radically uncomfortable Dr. King might be able to make you.

So before you share your pretty post on social media on Monday, keep reading to find out how you can earn your right to do so. Trust me when I tell you these actions are completely painless and don’t even begin to scratch the surface. I’m just trying to move us all from a place of consumption of the dream for our own full white bellies to actually moving forward in an act that resembles something like actual anti-racism. This is not a pass, and this tiny little act you might take does not last forever. It’s simply your first step in moving toward MLK’s dream.

Don’t get me wrong — the Dream speech is powerful, and moving, and absolutely aspirational. It’s something that Christians especially should pay some serious attention to, and not just in the form of meme-sharing, goose bump inducing viral spread of grainy, black and white videos. I’m talking sit down and read the damn thing. I’m saying dig into the picture of what he’s calling us to create, and get to work creating it.

The problem I have, though, is that we love to praise the man for telling us about is dream, but when it comes to actually doing the work, that’s where we put up our hands and say, “Hey, now, slow down there, Skippy. Let’s not get crazy.” And the fact is that over the course of his life, MLK lost faith in white people, in the idea that if he could just paint a beautiful enough picture, of course we’d want to jump in and play on that diverse playground.

Instead, we’re grabbing onto the legs of our moms, throwing temper tantrums and saying we want to take our toys and go home.

Last August, I took a class on the theological ethics of MLK and I was devastated by what I learned. He was a beautiful writer, an incredible speaker, obviously. He was also an imperfect man, a womanizer, and sexist. And toward the end of his life, he was beginning to focus on poverty and anti-militarization. He was about taking down empire, subverting the status quo, and destabilizing systems of privilege and colonialism that result in the murder and devastation of populations all over the globe.

But none of that makes white people feel good about ourselves. In fact, most of us find it absolutely terrifying. So we whitewash his message so that we can tell ourselves that we believe in MLK’s dream, but we don’t actually do anything that even comes close to resembling the work it will take to make it a reality. Because the destabilizing of systems and ending poverty and hunger and for-the-love-of-all-that-is-good-and-holy finally ending American colonialism (because yeah, it’s still happening — been on a “missions trip” lately?) is the work that MLK actually calls us to do.

But while we’re feeling all proud of ourselves for sharing a meme or two, our siblings of color are still dealing with racism every. Single. Day.

I’m challenged by work like this piece, written by my friend Ben Tapper, that tell stories of micro-aggressions and their effects on people. I’m challenged by people like Rachel Cargle and Layla F. Saad, who tirelessly bear the emotional burden of providing white people the education we should be working on obtaining for ourselves. And most of all, I’m challenged by reading Dr. King’s work — all of it. More of it than just the dream. I’m challenged by the work.

So by all means, share a meme this Monday. But before you do, consider doing one of the following things first, as your ridiculously tiny little way to begin building the dream.

Download Layla F. Saad’s Me & White Supremacy Workbook. Don’t share it with your friends. Tell them about it, and then direct them to Layla’s website so they can give her their email address and get it for themselves. This honors Layla.

Donate to Rachel Cargle’s Therapy for Black Women and Girls fund. Here’s your chance to put your money where your meme is.

Write a letter to your pastor and request that your church begin to do anti-racism work, beginning with bringing in a consultant to teach you about white privilege.

Next time you’re about to follow up any sentence or thought with, “…for a black person,” just. stop. Check yourself.

There! You have now officially earned the right to share exactly one meme, and one meme only, on Martin Luther King, Jr. day. Perhaps you can start with a meme that includes this quote:

Our lives begin to end the day we become silent about things that matter. 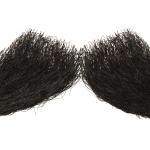 January 13, 2019
Where God Goes: Thanks Christians, but Leonard Cohen's Original Halleluja is Fine by Me
Next Post 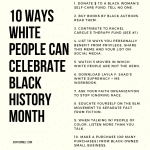 February 1, 2019 10 Ways White People Can Celebrate Black History Month
Recent Comments
0 | Leave a Comment
"I find this a hard read, and I would never, ever discredit you, I could ..."
Jeanne Pope Trapped In Stone: Another #MeToo Story, ..."
"nice article."
Brandon Roberts The Nail In The Coffin: On ..."
"There is no god. Stop wasting your lives on fairy tales."
Nixon is Lord Trump’s Transgender Genocide: Dude. You Can’t ..."
"Repeating your personal opinion, assumptions presumptions and suppositions fails to validate justify or defend your ..."
rationalobservations? James Cone, Judas and Twisted Souls: ..."
Browse Our Archives
get the latest from
Progressive Christian
Sign up for our newsletter
POPULAR AT PATHEOS Progressive Christian
1

God Said It, I Believe It,...
Freelance Christianity
Related posts from Jerseygirl, JESUS