The Miracles of Creation? (RJS)

There have been a number of interesting posts on the Biologos blog recently; a series of three posts by Ard Louis on Miracles and Science (Part 3 here) extracted from his scholarly essay, and a post just yesterday by Pete Enns, Jesus and the Sea. 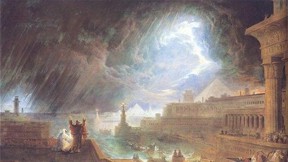 No matter how we look at it the question of miracles is a key one as we consider faith, worldview and science. Certainly I have been asked many times on this blog how I can dismiss a miraculous creation (I don’t – but we’ll get to that), yet accept (apparently arbitrarily) the miracles performed by Jesus and, of course, the resurrection. Isn’t it all or nothing?  How can we pick and choose?

On the science side, of course, acceptance of miracles is met with complete incredulity. Ard Louis begins his essay with a typical encounter:

Unbelievable, isn’t it, that there are still students at this university who believe in stories from the Bible, said Martin, an older colleague, at one of the formal dinners around which the traditional life of Oxford University revolves. But Martin, I answered, their faith probably doesn’t differ much from mine. I can still see his face go pale while he nearly choked on his glass of St. Emilion Grand Cru Classé: How can you believe in such things nowadays – Walking on water, a resurrection from the dead? Those are miracles, and aren’t you a scientist?

If miracles are arbitrary acts of imaginative supernatural showmanship the incredulity of Martin is understandable. But they are not.  And this connects with the essay by Pete Enns, looking at the incidents in the ministry of Jesus where he rebuked or calmed the sea. These were not arbitrary acts, magic tricks, or acts of convenience to make life easier. These were miracles with a purpose – where the impact could not be missed. The essay concludes:

The theological power of these episodes is more fully appreciated when we keep before us the Old Testament “taming the water” theme they echo. This helps us see that the purpose of these two episodes was not simply to calm a storm for its own sake or to help the disciples get to the other side of the lake safely. It was to show the disciples what kind of messiah Jesus was. Israel’s God–the chaos tamer who rebukes the water–was here among them. The long-awaited messianic age has dawned, with more power and authority than anyone had expected. As Jesus says in John 8:46-47, to listen to him is to belong to God. Controlling the water shows his disciples–and us–that Jesus is worthy of our attention.

These are both excellent essays – well worth reading and pondering. They ask important questions:

When and why does God work miracles? How are miracles to be understood?

And connect with another important question:

What does this have to do with creation and our understanding of science? Is creation miraculous or natural?

Following on with these thoughts, I would like to put forward an idea considering creation, miracles, and acts of God. These are nascent thoughts, only in the process of formation. I open it up for discussion.

In most of the miracles described in scripture, perhaps all, there is a purpose and a meaning behind the miracle. The purpose is to reveal the power of God, to further his mission in relationship with his people created in his image, to redeem mankind, to inaugurate the kingdom. But everyday life of cause and effect, normal events, human relationships, dominate the scripture. I rather expect creation is much the same – ordinary evolution of time, ordinary cause and effect. Where might we expect exceptions? Alister McGrath in his book A Fine-Tuned Universe: The Quest for God in Science and Theology (see post here) notes that Augustine suggested that God created by potencies and process. Augustine’s interpretation of scripture led him to conclude that God created not by producing ready-made plants and animals but by potencies and process. He uses the analogy of seeds  – not as literal objects but as a way to wrestle with “the theologically difficult notion of a hidden force within nature through which latent things are enacted (p. 102).”  Following up on Augustine’s ideas, I think the acts of God in creation are tied up in events from which the stages of creation emerge to bring about his plan. 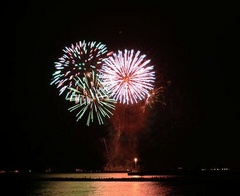 My daughter and I went to see fireworks a couple of weeks ago. A small town near us puts on an impressive display July 3. This year the weather was great – and so was the show. My favorite displays are layered with one blast from which a larger emerges, and finally an enormous spray from the first two.

When I think about creation as an act of God the image of such a firework display comes to mind. We have a series of events from which something bigger and better, with more potential emerges. Following this image and the ideas of Augustine, perhaps there are places in creation where something new, with greater potential and purpose emerges from what came before. Here we may see the hand of God, the act of God; in the big bang setting up a universe finely tuned for life; in the emergence of life from atoms and molecules; in the creation of humans in the image of God, for a purpose.

I don’t expect to see gaps with an absence of cause and effect. I don’t expect empirical proof amenable to scientific investigation. An absence of cause and effect within a chain of events isn’t the case in most, perhaps all, of the miracles of scripture. The miracle is evident only to those who are present to observe the act in the context of its purpose.

… let me resort to a musical analogy borrowed from Colin Humphreys. Suppose you are watching a pianist play a classical piece. You will notice that there are certain notes that he plays, and certain ones that he never does. The choice of notes is constrained because the music is being played in a particular key signature. But then, occasionally he may break this rule and play an unusual note. Musicians call these accidentals, and a composer can put them in wherever she likes (although if there are too many the music would sound strange). As Humphreys puts it,

If he is a great composer, the accidentals will never be used capriciously: they will always make better music. It is the accidentals which contribute to making the piece of music great. The analogy with how God operates is clear: God created and upholds the universe but, like the great composer, he is free to override his own rules. However, if he is a consistent God, it must make more sense than less for him to override his rules.(Quote from C. Humphreys)

Miracles serve a purpose to further the mission of God. They are significant in relationship between God and his people. They must make sense in the context of the overall story.

If you wish you may contact me directly at rjs4mail[at]att.net

July 15, 2010 Our Common Prayerbook 22 - 4
Recent Comments
33 Comments | Leave a Comment
Browse Our Archives
get the latest from
Evangelical
Sign up for our newsletter
POPULAR AT PATHEOS Evangelical
1