What happened at Delphi? 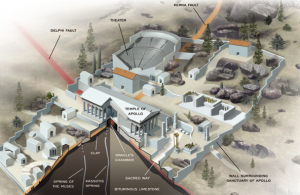 Excellent, informative and suggestive probing into what was really happening with the Pythia at the oracles of Delphi … by Jelle Zeilinga de Boer and John R. Hale:

The ancient sources describe two distinct types of prophetic trance experienced by the Pythia. First, and more normally, she would lapse into benign semi-consciousness, during which she remained seated on the tripod, responding to questions—though in a strangely altered voice. According to Plutarch, once the Pythia recovered from this trance, she was in a composed and relaxed state, like a runner after a race. A second kind of trance involved a frenzied delirium characterized by wild movements of the limbs, harsh groaning and inarticulate cries. When the Pythia experienced this delirium, Plutarch reports, she died after only a few days—and a new Pythia took her place.

According to toxicologist Henry Spiller, both of these symptoms are associated with the inhalation of hydrocarbon gases. Spiller studies the effects of such inhalants on young people, known as “huffers,” who breathe in fumes from gas, glue, paint thinner and other substances because of their intoxicating properties. Perhaps the Pythia too was high on one of these hydrocarbon gases.

It may even be possible to identify the kind of gas. Plutarch—who, we recall, was a priest of Apollo at the Delphic sanctuary—noted that the intoxicating pneuma had a sweet smell, like expensive perfume. Of the hydrocarbon gases, only ethylene has a sweet smell—so ethylene was probably a component in the gaseous emission inhaled by the Pythia.

Now, there is a good deal of evidence concerning ethylene intoxication, particularly from the early 20th century. In laboratory tests involving human subjects, the pioneering anesthesiologist Isabella Herb and other scientists studied the effects of light doses of ethylene. Ethylene worked twice as fast as nitrous oxide (laughing gas) and achieved similar effects with only half the quantity. In high concentrations, ethylene produced complete unconsciousness; in low concentrations, it induced a trance state. Ultimately, ethylene’s use as a medical anesthetic was discontinued because of its combustibility: A spark from electrical equipment in the operating room could ignite the ethylene canister, causing it to explode.4

From the evidence of “huffers” and the experiments with ethylene, we know that subjects normally react to inhaling small quantities of these gases by entering a benign “out-of-body” trance. They can remain seated and answer questions, but their tone of voice and typical speech patterns are altered. Recovery takes place as soon as the subject is removed from exposure to the gas, and complete amnesia about the trance follows. In a minority of cases (about one in six) in the ethylene experiments, subjects experienced delirium, or a “bad trip.” Experimenters had to use restraints to hold down those undergoing this delirium, which was accompanied by groaning, shrieking and a thrashing of the arms and legs.

People Are Excited about a New...
Ponder Anew
Related posts from Jesus Creed