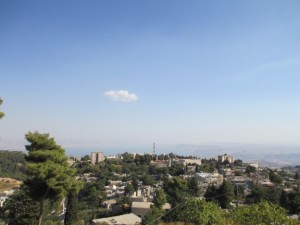 Pete Enns has a couple of interesting posts recently: And the main point of the entire Old Testament is…. followed by The gospel and the transformation of Israel’s story beyond its borders. These posts are worth some thought and some discussion.

From the intro to his first post (highlights and emphasis in the original):

I was taught in seminary and graduate school, as were many others of my generation and several before that, that the OT doesn’t have “a” central point–there’s no central concept around which you can organize the OT. The OT is too diverse for that sort of thing. As soon as you find a theme that seems to work, it either doesn’t (e.g., covenant) or it’s too broad to be of much use (e.g., God).

I agree, but some themes are right there in your face, more than others, and one of them is getting higher and higher on my top 10 list:

That may sound off a bit boring–maybe even not terribly spiritual–but land is a major idea the Bible keeps on the front burner. Actually, I may even be understating things bit.

The promise to receive land, getting it, how to hold on to it, losing it and getting it back, and how not to lost it again.

I’ve just described the main storyline of the OT.

And toward the end of his second post (again, highlights and emphasis in the original):

So, here–finally–is my point for today:

Tying together Israel’s story and the Gospel has been the grand challenge of the church since the very beginning. The two don’t fit together easily, and it takes creative energy to bring them together.

What we see in the New Testament is the early followers of Jesus, like the Gospel writers and Paul, taking up that challenge. They are doing the work of connecting Israel’s story–with it’s focus on land, temple, gentile exclusion, holiness laws, etc–to the Jesus story–where those elements were no longer central, and where Messiah Jesus didn’t meet expectations.

To bring those stories together, the Old Testament could no longer be followed, but had to be transformed beyond its original intentions.

The New Testament writers were assigned this task of explaining how the Gospel, which goes so far beyond the confines of Israel’s story, is still connected to Israel’s story. The center point of that transformation was Jesus.

The full posts put these ideas into a more complete context. But this is enough to get the general idea for discussion.

Does this make sense to you? Is Land a (or even the) main storyline of the Old Testament?

Did the New Testament writers need to transform the Old Testament beyond its original intentions? 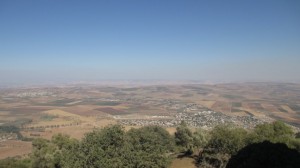 Now Peter Enns is the Old Testament scholar. This is certainly not my area of expertise. I’ve learned many things from him and from other careful Old Testament scholars. But I have to admit, there is a piece of this that doesn’t quite ring true to me. While it is clear that elements focusing on the land and recovering the land upon return from exile play an important role in parts of the Old Testament, I don’t see this as the major theme, rather it is an incidental theme required for the story line, but not the point of the story. It seems to me that the major theme that unites the various disparate texts we have in the Old Testament canon lies in Yahweh as creator and redeemer and in concepts like obedience, and righteousness, rather than “Land”. Perhaps a better way to say this would be to say that the underlying theme in the Old Testament is the Wisdom of God rather than any specific reward from God.

Land is part of God’s promise to Abraham. Actually, back up. As I laid out in The Evolution of Adam

, the Adam story is already a snapshot preview of Israel and land.

The Garden of Eden is symbolic of Canaan. Adam and Israel are each placed in a piece of real estate, and remaining in the land depends on obedience to God. Both Adam and Israel break God’s law and are exiled.

I thoroughly enjoyed, was challenged by, and learned a great deal from The Evolution of Adam, but I have to admit this view of Genesis 2-3 didn’t convince me. It is not that I think it is a dangerous interpretation, just that I remain unconvinced that it is the right interpretation. Remaining in the land depends on obedience to God, but the emphasis is not on the land, but on obedience and all that this entails. The Adam story as a snapshot preview of Israel is too limiting.

In Ch. 5 of The Evolution of Adam Enns brings up slightly different perspective. The text of Genesis 2-4 is, he suggests, an example of Old Testament wisdom literature. This approach to Genesis has roots in the second century beginning with the writings of Irenaeus of Lyon and is still common in Eastern Orthodox thinking. When Genesis 2-4  is read side by side with Proverbs several different elements help make this connection. Elements of shrewdness and cunning play a key role, the serpent is more cunning than any other creature and outwits Eve. Eve lacks wisdom and attempts to fend off the serpent on her own before being deceived by the serpent’s half-truths.

Following the path of wisdom yields life. The Adam story depicts this as maintaining access to the tree of life. Likewise in Proverbs wisdom leads to life, and wisdom is referred to as “a tree of life to those who lay hold of her” (3:18; cf. 11:30). This is why Adam and Eve, when they take their own path toward wisdom and eat the forbidden fruit, are barred from eating of the tree of life. (p. 90)

The Adam story as Wisdom literature makes more sense to me than the Adam story as a snapshot preview of Israel. Wisdom literature in the Old Testament is not really focused on Israel or on land. Rather it seems to be a reflection that grows out of Israel’s experience but focuses on wrestling with deeper truths about mankind and about God. In this vein, the story of Adam and Eve is a story that goes deeper and speaks more globally to the human condition than a story of “Israel’s drama – its struggles over the land and failure to follow God’s law – …placed into primordial time” alone ever could.

Am I off base? …Missing the point? …Making a point?

August 1, 2013 What Kind of Reader Are You?
Recent Comments
19 Comments | Leave a Comment
Browse Our Archives
get the latest from
Evangelical
Sign up for our newsletter
POPULAR AT PATHEOS Evangelical
1