The Thrust of the Biblical Plot (RJS) 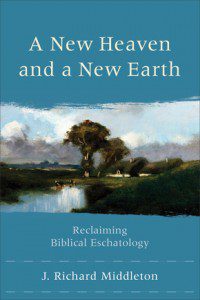 A while ago I was taken to task in a (late) comment on a post I put up discussing the Bible’s plot line. I find the short hand creation – fall – redemption – new creation or consummation (CFRC) to be an over simplification that under emphasizes the Old Testament and leaves the impression that the incarnation was an after thought response to humans. This commenter noted with some passion that more sophisticated framings exist. It is these that should be wrestled with rather than the “easy pickings.”  Richard Middleton begins his book A New Heaven and a New Earth with an outline of the plot of the Bible.  His view is, by his own telling, CFRC, but with more sophistication and taking the Old Testament seriously.  No doubt there will still be areas in need of discussion, but Middleton’s outline deserves to be considered carefully.

Humanity. From Creation to Eschaton (part one of Middleton’s book) outlines the biblical plot beginning with a consideration of human purpose. This is something of a summary of Middleton’s arguments concerning the call and vocation of humans as the image of God which is presented in much greater detail in The Liberating Image.

Just as as the cult statue or image in an ancient Near Eastern temple was meant to mediate the deity’s presence to worshipers, so humans are the divinely designated mediators of the creator’s presence from heaven (where YHWH is enthroned) to earth. But whereas cult images of the gods are false images, and impotent to boot (Ps 115:4-8), humans are powerful, living images of the one true God, called to manifest God’s presence by their active cultural development of the earth. By our obedient exercise of power, humanity as imago Dei functions like a prism, refracting the pure light of God into a rainbow of cultural activities that scintillate with the creator’s glory throughout the earth. By our faithful representation of God, who is enthroned in the heavens, we extend the presence of the divine king of creation even to the earth, to prepare for God’s full – eschatological – presence, the day when God will fill all things. Then (when God fully indwells the earthly realm) the cosmic temple of creation will have been brought to its intended destiny. (p. 49)

There is a problem however. Humans have corrupted this God given calling and vocation. Violence, domination, and evil are manifest in human culture and and in the way humans exercise their rule. This begins at the beginning (Genesis 3 in the Bible) and continues throughout all of human history.

The plot line.  Given this view of human vocation, Middleton turns to the overall plot line in scripture (This figure and the following figures are adapted from Fig. 3.2 p. 60). At the most fundamental level this is simple:

God created humanity in his image to rule his creation. Ultimately this will lead to the consummation that God has planned from the beginning.

Because humans have failed in obedience we see several subplots in Scripture, added layers to the plot. These subplots address the question: How will the fundamental plot line be maintained? The primeval history in Genesis 4-11 makes clear that there is a deep problem. Even the flood is “a failed attempt at narrative resolution, since the human heart has not been changed.” (p. 61)  Reducing the human population to one righteous man and his family won’t solve the problem.

God calls Abraham and Israel to be his chosen people. “God tells Abraham, Isaac, and Jacob that the long-term purpose of their election (including that of their descendants)  is that through them all nations or families of the earth will find blessing.” (p. 61)

God sends his chosen people into exile with a famine.  He delivers them from this exile as foreigners in Egypt and forms a nation. But the human heart still has not been changed.  As time advances we see a series of actions designed to bring Israel back to their calling as God’s chosen people called to be a blessing to all nations.  Moses is followed by Joshua who is followed by a series of judges, some good, some not so good. As Samuel grows old and the people find his sons unworthy successors, they call for a king.   Kings have problems too. Even David, a man after God’s own heart, has some significant character flaws. Most of the others are worse. The prophets are sent to the kings and to Israel. Eventually this leads to exile in Babylon (for the tribes that are still around – the northern kingdom of Israel has all but vanished). 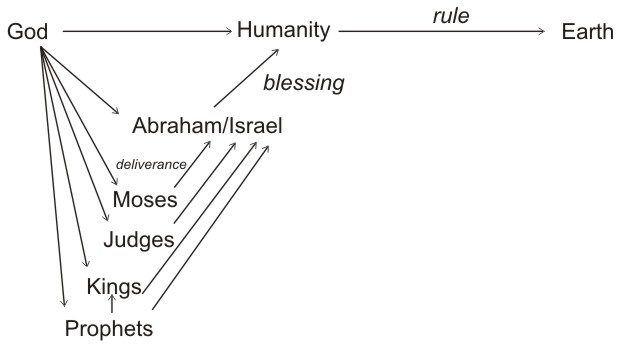 Part of the problem is that Israel seeks salvation from external threats, but doesn’t turn wholeheartedly to God.  “Even after the return from Babylonian exile, Israel is still mired in its own moral corruption and the continuing oppression of foreign nations. … Together, these internal and external problems constitute what seems like an insurmountable impediment to God’s purposes for the flourishing of the covenant people … and therefore also for humanity and the created order.” (p. 67)

This leads to Jesus.  “Jesus is thus the ultimate helper, the one sent from God to accomplish the comprehensive healing of humanity and the entire creation.”  (p. 67)

However, it is important to note that in terms of the plot structure of the Bible, Jesus came initially not to save the world from sin, but rather to restore Israel to righteousness and blessing. This is not just an irrelevant technicality of history; it is crucial for our understanding of the role of Jesus as the turning point of the macronarrative of Scripture. As the Bible understands it, God sent Jesus as a helper or agent to restore Israel to its purpose and task, and through Israel ultimately to impact the entire human race.  (p. 67)

Jesus is the faithful prophet, Davidic king, judge, and Israelite, who fulfills the Abrahamic task of bringing blessing. He is also the “second Adam” (although before Adam) who fulfills the divine calling for humanity as the image of God.

Gentile mission and restoration of humanity. The disciples are called to bring the Israel and to the gentile world.  (c.f. Matthew 28:18-20) “In the context of the overall biblical story, the Great commission is best understood as a rearticulation of the Abrahamic calling, the vocation of the people of God to mediate blessing to all the nations of the world.” (p. 68-69)

The church, composed of both Jew and gentile, has become and is becoming (inaugurated eschatology) the “new humanity” of the fundamental story line.

Heaven. In this story, heaven is not the final destination for God’s people. The end of the story comes with a restored and then consummated creation. “When we attend to the basic thrust and movement of the biblical plot, it becomes abundantly clear that eschatological redemption consists in nothing other than the renewal of human cultural life on earth.” (p. 71)

This is fundamentally a CFRC (creation-fall-redemption-consummation) view of the biblical plot. It most certainly does not skip over, or devalue, Israel as God’s chosen people. In this respect the commenter who took me to task was correct. (Although I expect that most Christians don’t have this full development in mind when they think of the biblical plot as CFRC.)  I still think that even this detailed development of a CFRC approach misses some important elements. But that will be the next post.

Does Middleton’s outline of the thrust of the biblical story ring true?

Does it adequately capture the central role played by Israel?

November 10, 2015
What Makes a Worldview Most Christian?
Next Post

November 10, 2015 Catherine M. Wallace responds to Ross Douthat
Recent Comments
9 Comments | Leave a Comment
Browse Our Archives
get the latest from
Evangelical
Sign up for our newsletter
POPULAR AT PATHEOS Evangelical
1

Religion as "Communal Solidarity" or "Personal Identity"?
Research about how parents transmit their faith to their children raises the...
view all Evangelical blogs
What Are Your Thoughts?leave a comment
Copyright 2008-2021, Patheos. All rights reserved.