Of Artists and Activists (RJS)

While discussing the growing antipathy toward Christians, a friend remarked to me, “There are three kinds of Christians that outsiders to the faith still respect: pilgrims, activists, and artists. The uncommitted will listen to them far sooner than to an evangelists or apologist.” Although nonbelievers do not oppose a spiritual search, they will listen only to those Christians who present themselves as fellow-pilgrims on the way rather than as part of a superior class who has already arrived. Activists express their faith in the most persuasive way of all, by their deeds. And art speaks most authentically to the human condition; when believers do so with skill, again the world takes note. (p. 89, emphasis added)

We are all fellow pilgrims, so this should not be hard … although some seem to prefer to come across as apologists or evangelists with all the neat, pat answers. The last post on the book looked at what Yancey means by fellow-pilgrims. Activists and artists are a more select group, especially artists. While we all should be active, known by our deeds, we are not all called to be activists making this our focus; and most of us simply are not artists of any note at all. My gifts are not in the areas of artistic expression. Yet activists and artists play an important role.  Art can touch the soul where argument and information cannot.

Where do you see the power of activism in the church? Who embodies this witness?

What roll can or should art play? Who is making an impact through their art?

Activists. Most Americans don’t think of activism when they think of evangelicals. Or if they do it is associated with a political activism to impose moral values on a diverse society and promote the study of creationism. But Christians have long supported hospitals and educational missions. Organizations like Samaritan’s Purse and World Vision engage in a wide range of activities world wide, from organizing volunteers for medical missions to working for the provision of clean water and much more, through a conviction that the gospel calls us to this kind of involvement.

Yancey suggests that Miroslav Volf may have framed the best way of communicating our faith – especially in a skeptical, post-Christian culture.

By emphasizing doctrine, we set ourselves apart from “the other” and may be tempted to impose our beliefs by force. Instead, guided by the Golden Rule we should concentrate on living out our beliefs, progressing from hand to heart to head. Practical acts of mercy (extending a hand) will express our love (the heart), which in turn may attract others to the source of that love (head beliefs).(114)

It is important however, that the acts of love be genuine. They cannot convey a spirit of superiority toward others, or be sugar coating an ulterior motive. We express love and act with mercy and generosity because God first loved us.  Others are drawn in by the genuine, no strings attached, love.

A skeptical world judges the truth of what we say by the proof of how we live. Today’s activists may be the best evangelists. (p. 114)

Despite the bad rap that evangelicals sometimes get, they are viewed in many parts of the world as at the forefront of development, job training, human rights, religious freedom, medicine and education. Evangelicals have learned that “the two prongs of conversion and social change actually work together,” and that “Jesus’ gospel applies to the whole person and not just the soul.”  Yancey provides a number of great examples – breaking the stereotype of evangelicals as busybody moralists.

The church works best not as a power center, rather as a counter cultural community – in the world but not of it – that shows others how to live the most fulfilled and meaningful life on earth. In modern society that means rejecting the false gods of independence, success, and pleasure, and replacing them with love for God and neighbor. (p. 124-125)

This makes an impact and can change hearts and lives. Nicholas Kristof, who with his wife Sheryl WuDunn wrote Half the Sky: Turning Oppression into Opportunity for Women Worldwide (and excellent and challenging book by the way) wrote an op-ed tribute to John Stott in the New York Times a comment on evangelicals:

More important, go to the front lines at home or abroad, in the battles against hunger, malaria, prison rape, obstetric fistula, human trafficking or genocide, and some of the bravest people you meet are evangelical Christians (or conservative Catholics, similar in many ways) who truly live their faith.

I’m not particularly religious myself, but I stand in awe of those I’ve seen risking their lives in this way – and it sickens me to see that faith mocked at New York cocktail parties. (quoted on p. 129)

Today we would add the fight against the Ebola virus in Africa.

Christians are not mere wayfarers en route to the next life, but rather pioneer settlers of God’s kingdom in advance, a sign of what will follow. By living out lives of grace in a spoiled environment, we point forward to a time of restoration. … In a world gone astray we should be actively demonstrating here and now God’s will for the planet. (p. 129-130)

Although we may not all be activists in a dramatic fashion, rolling up our sleeves to tackle major problems, risking life and limb, we are all called to actively live in the love of God’s kingdom to come.

Artists. Literature, painting, drama, music. These all have the power to convey a message mere facts and exhortations cannot. There is a reason Jesus spoke in parables. The words of the wise are like goads, their collected sayings like firmly embedded nails—given by one shepherd Ecclesiastes 12:11.  Artistic expression can act as a goad, as firmly embedded nails, as a guide for insight and understanding, or as an almost other worldly inspiration.

The arts have become a pulpit for culture at large, one too often neglected by people of faith. N. T. Wright says that the arts “are highways into the center of a reality which cannot be glimpsed, let alone grasped, any other way.” (p. 133)

Eliot, Tolkien, Michelangelo, Handel, there is a power in art unequaled in many other forms of communication. Christian themes often lead to powerful artistic expression. It matters little if the artists were devout, irreligious, or a little of both with feet of clay.

Worthy music may originate from small thoughts – occasionally a good piece surfaces from all the drivel extolling teenage love, for instance – but give Beethoven a concept like “God of God, Light of Light, Very God of Very God,” or assign Handel the surrealistic setting of “Worthy Is the Lamb” in revelation 5, and you can understand what has fueled much great music through the centuries. (p. 141)

We handcuff out artists too often, insisting the art be safe and bland. Art should often be a goad, it will not always uplift and inspire. Yancey notes that evangelical publishers “in their concern to give readers a feel-good takeaway, do not seem to grasp that both goads and nails are worthless unless they are pointed and sharp. (p. 143)”

An artist is not merely a teacher, preacher, or apologist.  “We should cultivate a respect for the uniqueness of an artist’s voice and vision, and a recognition of why we need a whole culture of individual artists who are speaking truth and beauty and prophetic warning into our lives and culture.” (p. 144)  Some artists will leave a legacy that outlives them by many generations, but even those who “scribble in the sand,” whose contribution is washed away with the next rain, are needed.

The activist extends grace through acts of mercy … feeding the hungry, housing the homeless, healing the sick, freeing the captive.  A truly important witness to the the grace of God.  Those who work with words, music, painting, or other arts can also extend a form of mercy, dispense a kind of grace. This is a spiritual work of mercy, also an important witness to the grace of God.

If you wish to contact me directly you may do so at rjs4mail [at] att.net 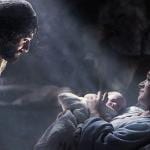