Gould, Bryan, and the Importance of NOMA (RJS) 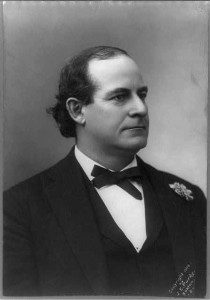 Today William Jennings Bryan (1860-1925, image source) is best known for his role in the (in)famous 1925 Scopes trial in Dayton TN. Stephen Jay Gould devotes much of a chapter in his book Rocks of Ages to Bryan. Gould does not support Bryan’s view of evolution – but he understands it. This incident provides a textbook example of the importance of NOMA (nonoverlapping magisteria). Pun intended.

The on-the-scene reports provided by H. L. Mencken and the dramatized versions of the Scopes trial don’t do justice to the reality, although they tend to dominate public memory. Bryan was a well respected politician, and one who championed the cause of the poor and oppressed because he lived, or tried to live out, his Christian ideals. Bryan was never a young earth creationist, he testified on the stand to an old earth view. Concerning this testimony: “Darrow may have come out slightly ahead, but Bryan parried fairly well, and certainly didn’t embarrass himself.”(p. 137)  But Bryan was opposed to evolution, and defended the law Scopes broke out of conviction. He was a skilled orator and a dedicated reformer, not some addlepated yokel.  He was not a conservative Republican.

For it was Bryan who, just one year beyond the minimum age of thirty-five, won the Democratic presidential nomination in 1896 with his populist rallying cry for the abolition of the gold standard: “You shall not press down upon the brow of labor this crown of thorns. You shall not crucify mankind upon a cross of gold.” Bryan who ran twice more, and lost in noble campaigns for reform, particularly for Philippine independence and against American imperialism. Bryan, the pacifist who resigned as Wilson’s secretary of state because he sought  a more rigid neutrality in the First World War [although he was not a perfectly consistent pacifist]. Bryan who stood at the forefront of most progressive victories in his time: women’s suffrage, direct election of senators, the graduated income tax (no one loves it, but can you think of a fairer way?). (p. 152) 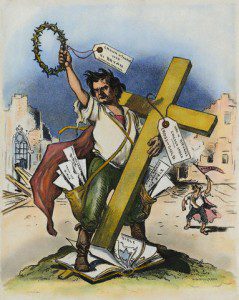 The cartoon to the right is a Republican satire of Bryan’s cross of gold speech.

Bryan opposed evolution because he “confused the fact of evolution with the Darwinian explanation of its mechanism,” and he attached moral significance to this mechanism. Gould quotes Bryan (Prince of Peace 1904) “The Darwinian theory represents man as reaching his present perfection by the operation of the law of hate – the merciless law by which the strong crowd out and kill off the weak. … I prefer  to believe that love rather than hatred is the law of development.” (p. 154-155) And a couple of years later: “In 1906, Bryan told the sociologist E.A. Ross that “such a conception of man’s origin would weaken the cause of democracy and strengthen class pride and the power of wealth.” (p.155)

Bryan’s discomfort was strengthened when he learned that social Darwinism had been invoked to justify German militarism in World War I. (This he learned from a book Headquarters Nights by Vernon L. Kellogg – who was doing relief work in Germany while the US was still neutral and was posted to the headquarters of the German Great General Staff.)  Bryan was also influenced by Benjamin Kidd’s book The Science of Power that identified Darwinism with domination by force.  He felt that Darwinism worked against fairness and justice and toward exploitation for monopoly and profit.  “Darwinism, Bryan argued, had convinced so many entrepreneurs about the virtue of personal gain that government now had to protect the weak and poor from an explosion of anti-Christian moral decay.” (p. 156)  The force of these convictions drove Bryan to take up the battle in Dayton Tennessee.

I wish I could stop here with a snide comment on Bryan as Yahoo and a ringing defense for science’s proper interpretation of Darwinism. But such a dismissive judgment would be unfair, because Bryan cannot be faulted on one crucial issue. Lord only knows, he understood precious little about science, and he wins no medals for logic of argument. But when he said that Darwinism had been widely portrayed as a defense of war, domination, and domestic exploitation, he was right.  (p. 163)

But the problem isn’t with evolution, or even with Darwinian mechanisms. The scientists and others who over stepped the bounds of science (violated Gould’s principle of NOMA)  must shoulder the blame. “Many people believe that evolution validates this or that moral behavior because scientists have told them so.” (p. 164) Science is not the appropriate tool for moral pronouncements, and it should not be invoked in this way.

Several of the German generals who traded arguments with Kellogg had been university professors of biology. Scientists cannot claim immunity from misinterpretations, particularly from socially harmful arguments advanced in violation of NOMA, if their own colleagues become frequent proposers and perpetrators. (p. 165)

Gould clinches his argument with a few quotes from the Biology textbook that Scopes used in his Tennessee classroom.  These were not directly relevant for the Scopes case, as they didn’t discuss human evolution from apes, but give a clearer idea of the mess Bryan reacted against. From a section titled “Parasitism and Its Cost to Society – The Remedy,” Gould quotes the textbook:

Hundreds of families such as those described above exist today, spreading disease, immorality and crime to all parts of this country. The cost to society of such families is very severe. Just as certain animals or plants become parasitic on other plants and animals, these families have become parasitic on society. They not only do harm to others by corrupting, stealing, or spreading disease, but they are actually protected and cared for by the state out of public money. Largely for them the poorhouse and the asylum exist. They take from society, but they give nothing in return. They are true parasites.

If such people were lower animals, we would probably kill them off to prevent them from spreading. Humanity will not allow this, but we do have the remedy of separating the sexes in asylums or other places and in various ways preventing intermarriage and the possibilities of perpetuating such a low and degenerate race. (p. 167-168)

This paragraph is consistent with the history of the era in the US. It represents the kind of attitude toward the poor and oppressed that Bryan fought against his entire career. Gould quotes another passage describing the five races or varieties of man that ends … “and finally, the highest type of all, the Caucasians, represented by the civilized white inhabitants of Europe and Asia.” (p. 168)  Social commentary was commonly mixed into the biology of life in these textbooks. Is it any wonder that Bryan, given his life focus, objected? Gould concludes: “Bryan advocated the wrong solution, but he had correctly identified a serious problem!” (p. 169)

Gould’s proposal of NOMA speaks most clearly to the scientists, to those who are tempted to overstep the bounds of science and make moral proclamations in inappropriate areas from the pulpit of science.

We live with poets and politicians, preachers and philosophers. All have distinctive ways of knowing, valid in their proper domains. No single way can hold all the answers in our wondrously complex world. Besides, highfalutin morality aside, if we continue to overextend the boundaries of science, folks like Bryan will nail us properly for their own insidious purposes. (p. 169-170)

I wish Gould had not thrown in the word “insidious” at the end of this quote – this has a negative connotation of intentional deceit, but I don’t think that Gould was using the word in this fashion. It also means operating or proceeding in an inconspicuous or seemingly harmless way but actually with grave effect.  Gould would certainly view Bryan’s solution to the problems identified above as insidious, but not because Bryan was treacherous or deceitful.

Gould does not really seem to understand religion – a problem I discussed in an earlier post (No Miracles Allowed?). The strength of his argument lies in the boundaries he identifies for science and moral pronouncements from the pulpit of science.  As Christians we should stand firm against such moral pronouncements when they run counter to Christ’s teachings. But we can, and should, take seriously what scientific method teaches us as the mechanism of God’s creation.

I find it deeply ironic that William Jennings Bryan, the darling of so many conservative Christians for his fight against evolution, would be anathema to the same for his social and political views. Views that Bryan drew from Christian teaching, the same Bible he used to argue against the dehumanizing forces of Darwinian evolution.

What do you see as the strengths and weaknesses of NOMA?

When should Christians take a stand and how? How do we identify the true root of the problem?

January 6, 2015
Paul and the Economic Justice Vision of Jesus
Next Post

January 6, 2015 Diversity Improvement in DC
Recent Comments
7 Comments | Leave a Comment
Browse Our Archives
get the latest from
Evangelical
Sign up for our newsletter
POPULAR AT PATHEOS Evangelical
1