Hani loved his four children — three girls and a boy, the youngest — more than anything in the world, his family says. He was gentle and kind, always making a joke whenever he could. His wife Magda Aziz, 29, will forever remember his laugh.

“I felt like he was an angel,” Magda said of her deeply devout husband. “There was a prayer in anything he said.”

Hani desperately wanted to come home after eight months laboring in Libya. He was sick and tired of the relentless violence and the constant threat of kidnapping. But leaving was a difficult choice. There was money in Libya, unlike in Al Aour, money that he needed to support Magda and his children. But he finally decided to come home to his family, she said. He was killed before he ever got a chance to leave.

“He took care of all of us,” Magda explains, weakly. The women around her nod in unison, passing around a faded photograph of the smiling father with his little boy.

If you haven’t seen it, here is the Evangelicals-Catholics Together new statement on marriage. One paragraph:

As the most venerable and reliable basis for domestic happiness, marriage is the foundation of a just and stable society. Yet in our times this institution has been gravely weakened by the sexual revolution and the damage it has done to marriage and the family: widespread divorce; the dramatic increase in out-of-wedlock births; the casual acceptance of premarital sex and cohabitation; and a contraceptive mentality which insists that sex has an arbitrary relation to procreation. In this environment, families fragment, the poor suffer, and children are especially vulnerable and at risk. The decline of marriage culture is evident throughout the world, and where it is evident, the common good is imperiled.

Thanks to Rowan Hansen:

Last month, the Champaign, Illinois, fifth-grader addressed a letter to DC Comics — whose characters include Superman, Batman and Wonder Woman — to express her frustrations. “I love your comics,” she wrote, “but I would love them a lot more if there were more girls.”

In Rowan’s quest for truth, justice and the American way, her letter became more than a conversation; it became a movement that DC Comics couldn’t ignore.

Pain, it’s all in the brain, by Jon Hamilton:

When you whack yourself with a hammer, it feels like the pain is in your thumb. But really it’s in your brain.

That’s because our perception of pain is shaped by brain circuits that are constantly filtering the information coming from our sensory nerves, says David Linden, a professor of neuroscience at Johns Hopkins University and author of the new bookTouch: The Science of Hand, Heart, and Mind.

“The brain can say, ‘Hey that’s interesting. Turn up the volume on this pain information that’s coming in,’ ” Linden says. “Or it can say, ‘Oh no — let’s turn down the volume on that and pay less attention to it.’ “

David Lyon, CEO at Main St. Advisor in Chicago, says many people are working longer out of necessity. “People understand the cause and effect of that,” he says. “You would have to live under a rock to not see that people are living longer, health care costs are increasing. The combination of that gives people a pretty good feeling of instability.”

According to the Employee Benefits Research Institute, in 1991, just 11% of workers expected to retire after age 65. That jumped to 33% last year. Another 10%, like Fraser and Levinson, don’t plan to retire at all.

Meanwhile, the percentage of workers who expect to be able to retire before age 65 has dropped dramatically, from 50% in 1991 to just 27% last year.

Still, there are many who refuse to remain idle as they age. It’s a choice.

Which states go to church the most and which go the least? Gallup. 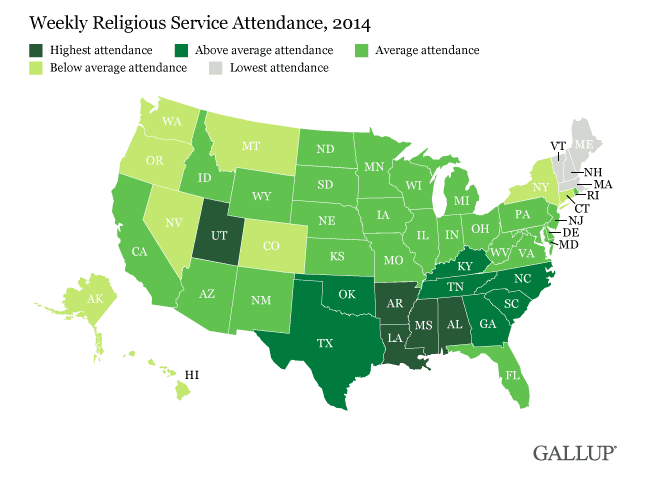 Suffering of the church in the Middle East and pastoral care:

“We are in the fifth year of the Way of the Cross,” especially in Syria, Iraq and the Palestinian territories and also in Lebanon, “which is affected in a tragic way by war, which rages around it,” Patriarch Laham said.

He continued: “This is a tragedy of the greatest tragedies of history — not just in the region, but in the world — since World War Two.

“We call on all citizens and our children (to work together and with Pope Francis) to not let the flame of hope be extinguished in your hearts.”

The Syrian-born prelate pointed out that Lebanon has accepted waves of displaced people and refugees: from Palestine since 1949, from Syria since 2011 and, currently and in stages, from Iraq.

Lebanon is now hosting more than 1.5 million refugees — mostly Syrians and an increasing flow of Iraqi Christians — putting a strain on the country’s infrastructure and resources for its existing population of around four million people.

“How many have heard about all the stories of suffering,” he said. He noted that although the Church encourages the faithful in the region to remain and hold on “with ropes of hope and faith and surrender to the will of God,” at the same time, the decision whether to stay or to leave one’s country “is a personal decision and responsibility of every individual and every family.”

“But we as pastors, we will remain with all who remain, and serve them … with all our strength,” Patriarch Laham added.

Working late in a tiny Arkansas lab, Susan Wilde found herself alone with a killer.

It startled her. She jumped, let out a yelp, and took off down a hall. Wilde wasn’t running for her life; she was amazed by a discovery. She had uncovered a bacteria, one with a powerful toxin that attacked waterfowl, hiding on the underside of an aquatic leaf that grows nearly everywhere in the United States, including the Chesapeake Bay.

After 20 years of testing determined that the bacteria had never before been recorded, and the brain lesions it cause had never before been found before that night in 1994, Wilde recently gave her discovery a name: Aetokthonos hydrillicola. The Greek word means “eagle killer” for its ability to quickly kill the birds of prey. It’s the latest threat to a raptor that is starting to flourish after being removed from the endangered species list.

Across the South, near reservoirs full of invasive plants from Asia called hydrilla, eagles have been stricken by this bacteria, which goes straight to their brains. Eagles prey on American coots, which dine almost exclusively on hydrilla.

Before you travel abroad, check this map:

The island nation of Madagascar and the landlocked Himalayan nation of Bhutan might seem like charming tourist attractions. Travelers might want to think twice before visiting them, though. A recent Health Risk index by International SOS urges caution for visitors to those two countries, among other places.

The world map reprinted here is a reflection of more than 300,000 medical incidents which were reported in 2014 by companies to International SOS, which specializes in health care and emergency services to clients with business travelers overseas. Based on that data, a panel took into account threats of infectious disease, hygiene and sanitation, frequency of accidents and the availability and quality of the local health infrastructure to determine how risky a trip to a particular country might be.