The Lost World of Adam and Eve 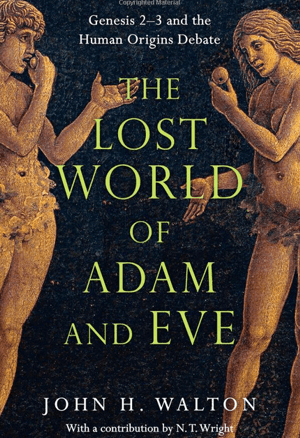 John Walton’s on a roll — another in the Lost series, this one called The Lost World of Adam and Eve: Genesis 2–3 and the Human Origins Debate. I will do just a brief sketch-kind of post on the book and RJS will do a more in-depth series. Walton, professor at Wheaton College, wrote a book called The Lost World of Genesis One that sought to press Genesis 1 back into the Ancient Near East (ANE) world of origins and creation. For many of us, it was a successful book even if here and there disagreements arose. His big conclusion was that Genesis 1 is functional not material ontology, which is way of saying the various days assigned functions to various elements of creation but they were not the origins of those materials.

This book maps his ideas on Genesis 2–3, which enters us into the realm of a second creation account and the all-too-vexing matter of the “fall” of Adam and Eve.

What are your questions? Which of the following propositions will be most provocative or controversial?

Walton’s method in his Lost series books is to spell out his various theses and his theses are the following:

Proposition 10: The New Testament Is More Interested in Adam and Eve as Archetypes Than as Biological Progenitors
Proposition 12: Adam Is Assigned as Priest in Sacred Space, with Eve to Help
Proposition 13: The Garden Is an Ancient Near Eastern Motif for Sacred Space, and the Trees Are Related to God as the Source of Life and Wisdom. .
Proposition 14: The Serpent Would Have Been Viewed as a Chaos Creature from the Non-ordered Realm, Promoting Disorder .
Proposition 15: Adam and Eve Chose to Make Themselves the Center of Order and Source of Wisdom, Thereby Admitting Disorder into the Cosmos
Proposition 16: We Currently Live in a World with Non-order, Order and Disorder
Proposition 17: All People Are Subject to Sin and Death Because of the Disorder in the World, Not Because of Genetics .
Proposition 18: Jesus Is the Keystone of God’s Plan to Resolve Disorder and Perfect Order. .
Proposition 19: Paul’s Use of Adam Is More Interested in the Effect of Sin on the Cosmos Than in the Effect of Sin on Humanity and Has Nothing to Say About Human Origins (Including an Excursus on Paul’s Use of Adam by N. T. Wright)
Proposition 20: It Is Not Essential That All People Descended from Adam and Eve
Proposition 21: Humans Could Be Viewed as Distinct Creatures and a Special Creation of God Even If There Was Material Continuity

March 16, 2015 Great is the Enemy of ...
Recent Comments
22 Comments | Leave a Comment
"When looking for a solution for hemorrhoids numerous victims periodically spend huge a course in ..."
burakdeniz The Miracles of Creation? (RJS)
"This is a really weak take on DBH's arguments. I dont understand the impulse critique ..."
zech Reviewing David Bentley Hart
"So because 1-9 genesis referes to penis and then vagina. Therefore we can deduce that ..."
Jostein Syvertsen Yarhouse And Gender Dysphoria
"In some of the TTTE episodes pride goes before a fall crops up and that's ..."
Erica L Thomas the Tank Engine (Deconstructed)
Browse Our Archives
get the latest from
Evangelical
Sign up for our newsletter
POPULAR AT PATHEOS Evangelical
1