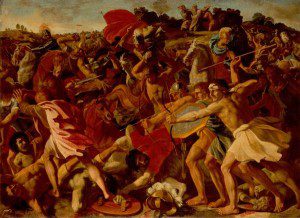 We recently finished a long series on Iain Provan’s new book Seriously Dangerous Religion. The final post (Dangerous or Not? … We Can’t Ignore Joshua) touched on an issue that concerns many in discussions of the Old Testament. I outlined Provan’s approach as I saw it in the book and offered some thoughts of my own. Today I have a response from Iain Provan on this topic. Although he offered this response to be posted, he won’t be available to participate in comments.

(The images in today’s post are of paintings by Nicolas Poussin, ca. 1625-1626, depicting his view of Joshua’s conquest of Canaan.)

I’ve been following with great interest your posts on Seriously Dangerous Religion for the last several months, and all the comments they have generated. I want to thank you very much for your thorough and accurate reporting on the content of the book – I feel very well represented!

Now that your posts are concluded, I wonder if I could enter the discussion on the point that is the focus of the final one? In this post, you say that “a valid case can be made that The Old Story is intrinsically dangerous if it actively teaches and encourages violence and warfare.” I do agree with this sentiment. So the question is: does the Old Testament do such things? It certainly describes violence and warfare in the ancient world – but does it actively teach and encourage us to engage in these activities? After all, there are many actions described in the Old Testament that cannot reasonably be taken by the alert reader of Scripture as intended for our imitation (e.g. David’s adulterous actions with respect to Bathsheba). This includes many actions commanded by God – since the alert Scripture reader knows that God commanded ancient Israelites to do many things that are not required of the Church (e.g. to engage in animal sacrifice). So we need to be discriminating in our judgments when it comes to questions of “teaching” and “encouragement.” My own judgment with respect to herem warfare very much agrees with your own: “We are not called to purify the land or to establish a holy kingdom by force.” That is absolutely correct, in my opinion.

The question of whether ancient Israel was ever called by God to do such a thing is another matter, and I think that it will help with clarity if we consider it separately. My conviction here is that our biblical authors certainly thought that ancient Israel was called to do such a thing at one point in its history. But here it is very important to read carefully and to note what these authors do say about this, and what they do not. In spite of what modern readers quite often claim (and this includes some of your respondents), the biblical authors evidently do not think that Israel was called to conquer and settle Canaan because of the race or ethnicity of the previous inhabitants, or because Israel had some kind of right to the land and the previous inhabitants were simply and inconveniently “there,” in the wrong place and at the wrong time. Our authors explicitly tell us, to the contrary, that in the events of the conquest and settlement, the Canaanite peoples were experiencing the justice of God, on account of their longstanding wickedness (Genesis 15:16; Leviticus 18:24-26; Deuteronomy 9:4-5) – just as the Israelites themselves in the period of the later monarchy are also driven out of the land on account of their longstanding wickedness. For the biblical authors, the war in Canaan as God’s (and not the Israelites’) war. The Israelites are only God’s vassals, summoned to help him fight against wickedness (e.g. Amos 2:9; Psalm 78:53-55).

Perhaps we should like to argue with our biblical authors about these claims; but at least we should recognize that this, and not something else, is indeed what they propose. It will not help the conversation if we begin by misunderstanding them. If we then advance to the argument itself, it interests me to know how we shall establish that, in fact, these claims are false – that, in fact, God was not bringing justice on the Canaanites for their long-term wickedness, but that something else was happening instead. What is the argument to be, on this point? That God cannot bring justice on wicked cultures in the here-and-now, but must wait until the eschaton? Or what? We need to be clear on this point. It will not do just to say that “this idea is dangerous because it has, in the past, and might in the future, encourage some people-groups to attack others.” The biblical authors do not tell us about these events in order that we can generalize from them about how we can recruit God to our own bloodthirsty schemes. Indeed, Scripture as a whole never does generalize from them, as it does from the Exodus, about the ways of God in the world. They are understood, within Scripture itself, as highly unusual events (which is indeed why I did not spend much time discussing them in my book – they are not considered in Scripture to be “normative”). Yet the question remains: did God (unusually) once bring these people-groups to justice in this way or not? The biblical authors claim that God did. What are the grounds for dismissing this claim?

And then, thirdly, there is the question of what, exactly, ancient Israel was called by God to do with respect to the Canaanites – not the “whether” question, but the “what” question. This is an important question that has not received as much consideration as it deserves and needs. Modern readerly attention tends to be drawn quickly to the herem language in answering this question, and to passages like Joshua 10:40-42 that give the impression that the conquest of the land of Canaan was complete, and that all the original inhabitants were wiped out. Yet the predominant way of referring to the conquest of Canaan in the Old Testament is in terms of expulsion, not killing (e.g. Leviticus 18:24-28; Numbers 33:51-56; 2 Kings 16:3)— just as the Israelites, later, are said to have been expelled from the land because they sinned in the same way as the Canaanites (2 Kings 17:7-23). Further, there are clearly many Canaanites still living in the land in the aftermath of Joshua’s victories – people who are not ultimately even expelled from the land, much less killed (e.g. Judges 1:1-3:6; 2 Samuel 24:7; 1 Kings 9:15-23). Clearly, then, there is something very strange about the language of Joshua 10 (and associated passages). Indeed, as Lawson Younger has helped us to see (Ancient Conquest Accounts: A Study in Ancient Near Eastern and Biblical History Writing, 1990), we are likely dealing here with the kind of hyperbolic language that is fairly typical of ancient Near Eastern conquest accounts in general – with ancient literary conventions governing descriptions of conquest and battle that should not be pressed in a literalistic manner. To press them in such a manner is immediately, in fact, to create enormous tension between what they apparently say, and what other Old Testament passages say about such important matters as distinguishing combatants from non-combatants in warfare (e.g., Exodus 22:24; Numbers 14:3), and not holding children, in particular, morally accountable for wrongdoing, or allowing them to be caught up in the consequences of their parents’ wrongdoing (Deuteronomy 1:39; 24:16—in the very book of Deuteronomy that speaks about the Canaanite wars). A particular absurdity that arises from such a literalistic approach is that Deuteronomy 7:1-3 must then be read as speaking of God “driving out” the current inhabitants of the land, then urging the Israelites to “destroy them totally” (herem), and then prohibiting intermarriage with them!

We are dealing with very important matters here. I hope that this short response has at least clarified what I think about them, and what it is that I read the biblical authors as thinking about them. I am very grateful to have had the chance to write. I shall also be grateful, however, if readers of both the Old Testament and my own humble attempt to explicate it in Seriously Dangerous Religion do not so dwell on these things that they neglect the many matters that our biblical authors consider to be much more centrally important. People like Richard Dawkins display a purpose in such a focused neglect. Perhaps the only thing worse than this is neglect with no purpose at all. There are many other aspects of the OT tradition that deserve our attention, and which RJS herself has done an admirable job of articulating over the last few months. 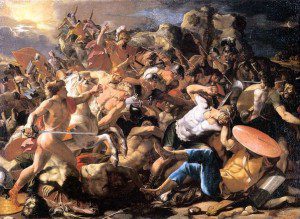 I found this response thought-provoking. I may have to pick up Younger’s book from the library and give the issue of ancient literary conventions more thought. Clearly the context of the original authors and audience should play an important role in proper interpretation of the text.  I have a habit of listening to scripture on my commute and as I’ve listened to the Old Testament several times through, the apparent inconsistencies have stuck out.  Things like: “destroyed completely” … but don’t intermarry with them, not to mention the judgment on the Moabites – followed very shortly by the inclusion of a Moabitess (Ruth) in the lineage of David and thus of Jesus!  It makes sense that these apparent inconsistencies are not “errors” but the result of what would have been considered by the author and audience to be appropriate hyperbolic language following literary conventions of the day.

Now I can focus the discussion on a few questions.

What role should the literary conventions of the ancient Near East play in our interpretation of scripture?

Is it the general idea of judgment that causes problems with the passages in Joshua, or is it the idea that God decreed judgment on innocent bystanders?

Is there a difference between judgment on Israel, devastated and sent into exile, and the judgment on other groups (Canaanites or others)?

April 16, 2015 Jak & Co
Recent Comments
23 Comments | Leave a Comment
"When looking for a solution for hemorrhoids numerous victims periodically spend huge a course in ..."
burakdeniz The Miracles of Creation? (RJS)
"This is a really weak take on DBH's arguments. I dont understand the impulse critique ..."
zech Reviewing David Bentley Hart
"So because 1-9 genesis referes to penis and then vagina. Therefore we can deduce that ..."
Jostein Syvertsen Yarhouse And Gender Dysphoria
"In some of the TTTE episodes pride goes before a fall crops up and that's ..."
Erica L Thomas the Tank Engine (Deconstructed)
Browse Our Archives
get the latest from
Evangelical
Sign up for our newsletter
POPULAR AT PATHEOS Evangelical
1