Today’s post turns again to John Walton’s new book The Lost World of Adam and Eve, before digging in I would like to mention a conference coming up this summer.  The BioLogos foundation is holding a conference on Evolution and Christian Faith in Grand Rapids MI, June 30-July 2, 2015. John Walton will be one of the speakers, and the format should allow ample opportunity for conversation and questions. At this conference we look forward to sharing a rich time of learning, fellowship, and worship with scientists, pastors, and teachers. I intend to be there, although not as a speaker. The speakers will include theologian Oliver Crisp, historian Ted Davis, biophysicist Ard Louis, New Testament scholar Scot McKnight, biologist Jeffrey Schloss, paleontologist Mary Schweitzer, pastor Leonard Vander Zee, and Old Testament scholar John Walton. Registration is now open; register by May 1 to receive the early bird rate of $150.  A 50% discount is available for clergy and students and some travel assistance is available.  Registration includes lunches on 6/30, 7/1, and 7/2, and dinner on 6/30. An additional dinner will be held on 7/1 for a (small) additional price. For more information:  Evolution and Christian Faith Conference, the registration page includes a click through link to the actual registration form.

Back to Walton’s book: 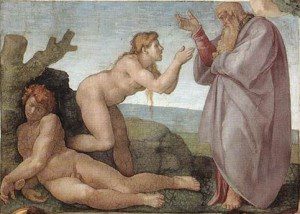 The next three propositions (#’s 8-10) in John Walton’s book The Lost World of Adam and Eve defend his proposal that the importance of Adam and Eve in the text and story of scripture is archetypal. This doesn’t preclude a historical Adam, and in the next post on the book we will discuss Walton’s proposition 11 concerning historicity.  Today, however, I would like to focus on Walton’s argument for an Adam and Eve as archetypes.

Genesis 2 is not making a claim about the material origins of humanity. Genesis 2 describes Adam as formed from dust.

Then the Lord God formed a man from the dust of the ground and breathed into his nostrils the breath of life, and the man became a living being.

The Hebrew word translated “formed” does not necessarily imply material creation. Walton looks at the use of the word in scripture.  A few examples will illustrate the breadth of meaning: Our days are formed by God (Ps 139:16), God forms a swarm of locusts (Amos 7:1) and Israel is formed by God as a people (multiple references in Isaiah and Jeremiah). The word translated as formed could as easily be translated prepared, ordained, or decreed.

Walton also argues that dust isn’t the material of human creation but an indication of mortality. “For dust you are and to dust you will return.”  Humans were not created immortal or there would be no need for a tree of life. Immortality is a divine gift. It never was human nature. This is consistent with Paul.

If people were created mortal, the tree of life would have provided a remedy, an antidote to their mortality. When they sinned they lost access to the antidote and therefore were left with no remedy and were doomed to die (i.e. subject to their natural mortality. In this case, Paul is saying only that all of us are subject to death because of sin: sin cost us the solution to mortality, and so we are trapped in our mortality. (p. 74)

The Bible also tells us that all of us are formed from dust. “For he knows how we are formed, he remembers that we are dust.” Ps 103:14 Formation from dust isn’t unique to Adam. All of us have the breath of life that comes from God. Isaiah tells us “This is what God the Lord says— the Creator of the heavens, … who gives breath to its people, and life to those who walk on it” (42:5). The breath of life isn’t unique to Adam. The language describing Adam is not unique to Adam – he is an archetype, an original or typical example.  He is not created from dust and breath while his descendants come “naturally.”

Eve is not formed from Adam, rather the man is split into two – male and female. Iain Provan makes a similar point in his book – the earthling is split into male and female (See the post Who Are Man and Woman?). The word translated as rib is better translated as side (as in a side of beef).  “The text is referring generically to the corporate human race that is ontologically gendered.” (p. 80)  Marriage restores the original union. “Woman is not just a reproductive mating partner. Her identity is that she is is ally, his other half.” (p. 81)  This isn’t to speak against singleness (after all Paul and Jesus were single).   Walton holds to a historical Adam and Eve and in accord with this view he suggests that Genesis 2:21-24 describes a vision that Adam had impressing upon him the fact that woman is his other half – this is the purpose of the “deep sleep” that God caused to fall upon him.

Ancient Near Eastern accounts of human origins. There are a handful of creation accounts that have been found in ancient Near Eastern texts, Sumerian, Akkadian, Babylonian, and Egyptian. Walton briefly considers eleven texts. Genesis is not an imitation of these, and its message is quite different from most of the other texts. Yet these texts provide insight into the genres and literary forms in use in the surrounding culture. This can provide insight into the context and the message of the Genesis account.  (The image to the right is of a tablet in the British Museum relating one episode of the Epic of Creation where the gods are celebrating Marduk’s victory over Tiamat. 7th century BC)

A variety of functions is evident in the texts and can be summarized in the following categories:

We can therefore conclude that in the general ancient Near Eastern cognitive environment, the interest of all of the accounts currently available to us is to elucidate the role of humanity through archetypal depictions that fall into the few paradigmatic categories that we have listed.  (p. 90)

In all of these accounts “materials mentioned in the creation of humans have archetypal significance … and are characteristic of all humanity.” (p. 91)  The Genesis account isn’t a copy of any of the other texts. It doesn’t relate the same story.  However “it remains rooted in the same cognitive environment.” (p. 91)

The New Testament interest in Adam. This will come up in more detail later in the book, but here Walton simply makes the point that the New Testament is more interested in Adam and Eve as archetypes than as biological progenitors. Aside from the genealogy in Luke 3 all of the references to Adam and Eve are found in the letters of Paul. Some of the references Walton classes as referring to an individual (e.g. sin and death entering through one man in Romans 5:12 – although death enters through the banishment from the tree of life, not from a loss of intrinsic immortality). Other references use Adam and Eve as illustrations (e.g. 2 Cor. 11:3 and 1 Tim. 2:13-15). Still others consider Adam as an archetypal representative – all are embodied in the one and counted as having participated in the acts of that one. Romans 5:12-14 includes this use of Adam, as does 1 Cor. 15:22.

“as in Adam all die, so in Christ will all be made alive.” Our status as being “in Adam” treats Adam as an archetype, although still a historical figure.” (p. 93)

First Corinthians 15:48-49 brings the discussion to the point Paul has been making throughout the passage:both Adam and Jesus are archetypes with whom we are identified. … In 1 Corinthians 15, then, we can see that Paul is treating Adam as an archetype representing mortal humanity. This use is similar to what was proposed for Genesis 2 since the archetypal connection to dust was human mortality. Paul has followed the lead of Genesis here. (p. 94)

It isn’t the formation of Adam that is treated archetypally, it is the fall that is important. Adam was mortal (of the dust of the earth 1 Cor. 15:47),  but other than this the New Testament isn’t concerned with his material origins.

Walton’s major claim here is that Genesis 2 is not particularly interested in the material origins of humanity. The message of the text is a deeper theological and archetypal message. This lack of concern with material origins is a general feature of the Bible and of the ancient Near Eastern context of the Israelites.  God is responsible for creation, and for the creation of humans, but exactly how – material scientific questions about creation – weren’t on the mind of the authors, editors,  or audience.

What is the purpose of the creation account in Genesis 2?

Does it make sense that the emphasis is on mortality, male and female as a team (two halves of a whole), and role (to work and care for God’s garden) rather than material formation and origin of humankind?

April 21, 2015 Free-Range Parenting and a Culture of Fear
Recent Comments
10 Comments | Leave a Comment
"Yes! Just read this article today May 26, 2022; but it's relevance and accuracy has ..."
Michael Nations The Future Isn’t Where We Thought ..."
"Curious as to why my comment was deleted? Here it is again for all who ..."
zfari Go Home or At Home?
"From my experiences, a God who has a Gender, a Sex, and a Biological Orientation... ..."
Kyllein MacKellerann What to Say When Someone says ..."
"What is the "final destruction of sin" please?"
Bob Shiloh What to Say When Someone says ..."
Browse Our Archives
Related posts from Jesus Creed