So much of my Christian journey has been marked by the way those in power have used their social privilege to either protect themselves or promote those in their families or their inner circles. I’ve written about nepotism in this space before. Others (click here and here) have raised lots of important questions about nepotism and related forms of cronyism in the church. These practices live directly at the intersection of a leaders’ joy in seeing his or her children/pals following the Lord andthose unflinching words James wrote about favoritism. And every time I think I’ve seen it all when it comes to those in power using their privilege to fast-track a family member to prominence, I discover a new variation on the theme. So because I keep running into it in churches large and small, I thought I’d volley a new question about the subject, below. If you’re a leader who has placed a family member or close personal friend in a position of responsibility in your church, I’d especially love to hear from you.

Not long ago, I sat in a very large church listening to a sermon given by the child of the church’s head pastor. This individual grew up in the home of a master communicator, and had obviously learned the family business from the inside out. The message was solid, but as I looked around me, I wondered how many other gifted teachers were sitting out there in the crowd who would never, ever be given an opportunity to speak because they would never have the kind of privileged access this individual did.

A famous mother or father handing the microphone to his/her child is one example of this two-tiered system, but it is far from the only one. Hiring the pastor’s kid to do janitorial work around a church building can be just as problematic, especially if there is a qualified unemployed man with both a servant’s heart and a family to feed who wants the job. Giving a ministry role to a relative or pal without looking around like you mean it to see who the Lord has brought to your congregation to do the work is another. Maybe your sister-in-law is really the best person for the task. Then again, maybe not. But in my experience, for every one truly qualified person who has been fast-tracked to a plum position due to blood line or BFF status, there are a dozen more who shouldn’t be in their roles. In doing so, it seems to me they’re robbing gifted, experienced, qualified people from the opportunity to serve. We aren’t gathered so a particular family flourishes, but so that the body of Christ does.

Promoting* your family members if you are in a position of influence doesn’t flat-out violate Scripture’s commands, but it certainly doesn’t enhance the notion that there is equal opportunity for all believers to offer their gifts in a local church. In the small and mid-sized churches where I’ve spent the bulk of my time, the congregations that run as family businesses reflect the dynamics and dysfunction of the family in charge. It means there’s a two-tier system at play: the family and those who’ve learned to function in that family ecosystem gets to sit at the adult table, and everyone else clusters around the kiddie table. Yet we all believe Scripture doesn’t talk about two tables, or better seats for those with financial, social or spiritual privilege. There’s only one table, and there is a seat at this table for each one of us.

When I came to faith in Jesus as a teen, I took seriously his words about becoming part of his family. I knew from reading the Bible I was a child of a Father who didn’tplay favorites. I know of no clearer way to state my thesis about familial privilege in the church than this: Nepotism is the way of kings, not servants. It is of the world, and sows worldly weeds among the seeds God is planting.

I’ve heard people proffering all sorts of loophole-seeking exemptions to the nepotism issue: “No guarantee a non-family member will do a better job than my cousin”, “My son knows what I expect”, “God loves families, and our clan is modeling healthy Christianity to our community”. How I wish the rationalizing would stop, and those leveraging their privilege would call it what it really is. I love my own family, broken and imperfect as we are. I am positive if any of my children or grandchildren ever desired to serve in the same ministry as me, I would be unreservedly biased in their regard. I know there would no way to navigate church conflict and critique as if we were all disconnected from these family relationships.

Am I wrong? I’d LOVE some pushback from those who’ve served in ministry with a family member. I’ve heard before from those who’ve been shut out of ministry roles or wounded by nepotism in the church. For those of you who don’t have a problem placing family members in positions of power in your congregation, talk to me about the benefits you see. How do you ensure that the church doesn’t become a family business, but functions as the body of Christ?  Is there an upside to nepotism in your church you’d be willing to celebrate in the comments below?

* Nepotism is not the same thing as celebrating your family member’s gifts and accomplishments with sensitivity among your congregation. I’m not suggesting pretending those family relationships don’t exist. I am suggesting that using your position to grease the skids into a position for your kid may be problematic for the rest of your (non-related) congregation. 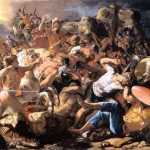 Christians, COVID-19, and the Dangerous Idol...
The Chorus In The Chaos
Related posts from Jesus Creed

On Misreading Winning and the Mandate of Heaven...
Times look bad  and the temptation is to extrapolate from who is...

Beginner's Guide to New Testament Studies—Deep Discount (Limited...
In light of the current challenges of theological education during isolation and...
view all Evangelical blogs
What Are Your Thoughts?leave a comment
Copyright 2008-2020, Patheos. All rights reserved.