Dennis Okholm is professor of theology at Azusa Pacific University.  He is the editor or author of several books including the well received, Monk Habits for Everyday People.

The interview was conducted by David George Moore.  Dave blogs at www.twocities.org. 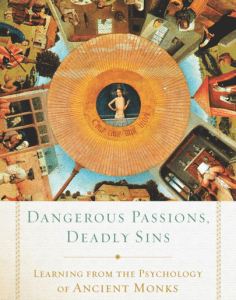 Moore: I am going to begin with a somewhat personal question.  It really is not personal, I guess, because “Rate My Professors” is public!  In any case, I was perusing the many favorable comments from your Azusa Pacific students and want to hone in on the description of one student: “He is very relaxed…”  Is being “relaxed” or we might say being at “peace” part of your natural constitution or have you grown into that virtue?  If it is the latter, what specifically has helped you?

Okholm: First, I should admit that I never look at “Rate My Professors.” The reason precisely has to do with the subject matter of this book: I need to take precautions against envy and pride, and I know that if I look at my “ratings” it will lead to both vices—with are related, by the way.

But, to answer your question, I think it simply has to do with my personality, perhaps for two reasons. In high school a church youth leader shared with me for the first time that God accepted me as I am. That gave me a confidence that I hadn’t had before. In addition, my father was a very good public speaker, and I think that rubbed off on me in such a way that it added to the confidence. So I guess the confidence expresses itself in being “relaxed.” Beyond that, I just enjoy teaching and love being with my students.

Moore:Briefly tell us the difference and relationship between the eight deadly thoughts and the seven deadly sins.

Okholm: The list of seven deadly sins stems from Gregory the Great’s Morals on Job (6th century). But he derived that from the work of Evagrius (4th century) and John Cassian (5th century). Evagrius talked about eight “thoughts” that are universally aspects of human life but which interfere with a healthy spiritual life. Cassian took that list and reflected on it further in his work The Institutes. Then Gregory revised the list of eight into seven: essentially he combined two of them as “sloth,” distinguished pride from vainglory and made it the fountainhead of the seven, and added envy.

Moore:There is immense insight and practical help to be gained from Christian writers in the ancient era.  Why are so many of us ignorant of these riches?

Okholm: Great question and one that concerned me enough to write the book. There are probably several reasons to be given in answer to your question, but no doubt one is because we are captivated by whatever it is contemporary in our consumer-oriented culture. We see that in the church’s worship, for instance. C. S. Lewis wrote about this in the Introduction to St. Vladimir Seminary’s edition of Athanasius’ On the Incarnation. Everyone should read this. Lewis was singing the praises of old books that have been time-tested, and he recommends we read one old book for every new book; but, knowing that is probably too much to expect, he suggests one old for every two new.

There are other reasons. Some of it has to do with our own pretention: namely, that the latest is the best. Another has to do with translations: some read well and some do not. I think folks like Jonathan Wilson-Hartgrove recognize this, so that he, for one, composed a paraphrase of St. Benedict’s Rule that encourages people to read what they might have found cumbersome to digest otherwise. (Benedict is in the same tradition with Evagrius, Cassian, and Gregory.)

Sadly, our church leadership does not often encourage us to look to the past for wisdom from the Christian tradition, yet it is our own tradition that has so much to offer. So one of the reasons I wrote this book is to help Christians realize that we have been studying what we call “psychology” for centuries and that we have been doing it from a Christocentric perspective. In fact, I discovered that much of what these early monastics wrote is corroborated by contemporary findings in the social sciences. I wish more of our Christian psychologists were encouraged to read this ancient literature in their training, but, sadly, they often are not. For instance, it would be wonderful if they would be assigned Gregory’s On Pastoral Care. I used to assign it when I taught the one theology course that was required by Wheaton Graduate School at the time for all students in the M.A. Clinical Psychology program.

Moore: American Christianity tends to promote a behavioristic model of Christian growth.   What are a few problems with this approach, and how do the ancient monks offer a better way?

Okholm: It may be surprising for many to learn that ancient monks were very holistic in their thinking. There was some Platonic or Neo-Platonic influence that tended toward a dualism at times, but as one of the monks put it (to paraphrase), we need to treat our bodies as if we will live for a long time and our souls as if they will be required of us tonight.

While I do agree that there is a “behavioristic model” of Christian growth at work in our churches today, I think that what is more prevalent is a kind of Gnostic dualism. N. T. Wright talks about this in Surprised by Hope. The danger is that it splits what is spiritual from what is embodied and material. But God always meets us through the material. This why I think embodied habits are good for the soul (whatever the “soul” is). The ancient monks certainly saw this in the way they consumed food, for instance. On the one hand, they recognized that gluttony had to do with our thought life. (In fact, I discovered that gluttony is not just about overeating, but it could be about undereating. It has to do with our thoughts about food, which is why what the monks talk about jibes with what a lot of what we talk about when it comes to anorexia and bulimia—a connection I make in the book.) But the thought life also is connected with our practices, which is why moderate fasting was prescribed by the monks.

So, one thing I have learned from the ancient monks is a more holistic approach to spiritual formation.

Moore: Respond to William Cavanaugh’s arresting observation that “Consumer culture is one of the most powerful systems of formation in the contemporary world, arguably more powerful than Christianity…”

Okholm: Cavanaugh does a great job talking about such things in Being Consumed. He insists that we are not so much attached to our stuff as detached, because we consume—we use up and replace. What the ancient monks were ultimately talking about is our loves. (In fact, askesis—spiritual discipline—was to cultivate apatheia—control of the passions such that they don’t interfere with one’s prayer life—which allows us to exercise agape. For example, as long as my thoughts are preoccupied by food or anger or envy, I cannot give myself completely to someone in love.)

Our loves or desires are what our consumer culture goes for. That’s why the information you need to know about certain pills is in small print in the television commercials, and why the lifestyle those pills are supposed to make possible is dramatized for your attention.

I wouldn’t say that Christianity per se is at fault, but the Christianity we practice (or fail to practice) is at fault. One of the questions that Cavanaugh asks that Jamie Smith picks up in Imagining the Kingdom is how a farm boy can be convinced to go to a foreign country to kill people he doesn’t know. Then Smith asks how a Christian could be convinced to be a martyr for Christ, suggesting that the answer is the same—liturgies that shape us. But what haunts me is that most U.S. Christians would sacrifice themselves for their country, but be less inclined (if at all) to be martyrs for Christ. I think this is related to the issue of our consumer culture. The nation has captured the supreme love of many because it has appealed to our desires, while, especially in Evangelical churches, we communicate information about the Faith while appealing to desires that have nothing to do with Jesus Christ, such as candy encased in plastic eggs dropped from helicopters as one church around here does at Easter.

Moore: How do you make Protestants less suspicious of ancient teachings which sound too (Roman) Catholic for their comfort level?

Okholm: This is precisely the concern I addressed in the second chapter of Monk Habits. One of the points I make is that these ancients belong to the church universal, not just to Roman Catholics. They came long before we officially split into Eastern and Western brands of Christianity, let alone before the West officially split into Protestantism and Roman Catholicism. Just at Protestants appeal to Augustine (whom Calvin cites more than any other ancient source in his Institutes), so we can appeal to and draw from the ancient teachings of folks like Evagrius, Cassian, and Gregory. I think once most Protestants read something like Gregory’s On Pastoral Care in a good, contemporary translation, they will realize what a trove of treasures await them that they never knew lay deep in the soil of our Christian tradition. And, by the way, every pastor should read the fourth section of Gregory’s book; his advice would enhance the way they live out their calling.

May 16, 2015 Oppressive Punctuation?!
Recent Comments
0 | Leave a Comment
"Curious as to why my comment was deleted? Here it is again for all who ..."
zfari Go Home or At Home?
"From my experiences, a God who has a Gender, a Sex, and a Biological Orientation... ..."
Kyllein MacKellerann What to Say When Someone says ..."
"What is the "final destruction of sin" please?"
Bob Shiloh What to Say When Someone says ..."
"Dr. Fitch, you write the following regarding the resurrection:Of course, Cone is focused on the ..."
J.R. Miller David Fitch, James Cone: Liberation Theology ..."
Browse Our Archives
Related posts from Jesus Creed