Of Gardens, Trees, and Serpents (RJS) 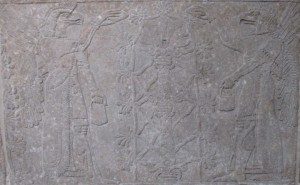 The next three propositions in John Walton’s new book The Lost World of Adam and Eve: Genesis 2-3 and the Human Origins Debate deal with the imagery of Genesis 2-3 in its ancient Near Eastern context. The garden, the trees, and the serpent all conveyed a meaning in the ancient Near East that is lost on the modern reader. In fact scholars are only now uncovering some of the depth of this meaning.

First, The Garden. “[T]he image of fertile waters flowing from the sacred space of God’s presence is one of the most common in the iconography or the ancient Near East.” (p. 104) Both temples and palaces in the ancient Near East were accompanied by landscaped gardens with pools, fish, birds, animals, and exotic trees. Adam was not placed in the garden as a farmer to till the ground. He was placed in sacred space to serve a priestly function. He needs an ally to help him in this sacred space and Eve is that ally, Adam’s ontological equal in the image of God.  This story has many resonances with ancient Near Eastern texts including the Gilgamesh epic. It isn’t that the text is derivative of, or copied from these texts, but that “Genesis is using common literary motifs to convey truths about humanity that are familiar topics of conversation in the ancient world.” (p. 110)  Although we can understand the basic meaning without an appreciation for these literary and cultural motifs, we will miss the depth of meaning and significance the text conveyed to the original audience. Genesis turns many of the cultural ideas on their heads in its focus on the God of Israel. Divine objects become created objects, and the role and place of humanity is quite different. These distinctions drive home the message. “The role of Adam and Eve as priests in sacred space is what sets them apart, not their sacred role.” (p. 115)

Walton holds that Adam and Eve were unique historical individuals, as discussed in the last post (Consider Melchizedek … and Adam). The imagery of the text, does not, however, require that they were the only humans alive at the time.

In light of their specific role concerning access to God in sacred space and relationship with him, we might alternatively consider the possibility that the are the first significant humans. As with Abram, who was given a significant role as the ancestor of Israel (though not the first ancestor of Israel), Adam and Eve would be viewed as established as significant by their election. This would be true whether or not other people were around. Their election is to a priestly role,the first to be placed in sacred space. (pp. 114-115) 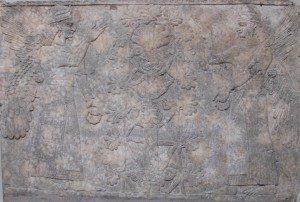 The stylized tree between the spirits is usually called a Sacred Tree or even, misleadingly, a Tree of Life. It bears some distant relationship to the palm-tree, having a palmette on top of the trunk and a trellis of smaller palmettes around it. The palmette is a distinctly Assyrian version of a symbol which had long been known in Mesopotamia and the Levant. Its exact meaning is not clear, but the flowing streams and vegetation could be taken as representing the fertility of the earth, or more specifically, Assyria itself. Though no two Sacred Trees were exactly alike, the arrangement of the branches on the two sides of each tree was always identical.

Walton looks at a text from Ashurbanipal’s library that sheds some light on the tree motif.  The tree is not a tree whose fruit has special powers, but is a cosmic tree. This imagery is found in Genesis, and in Ezekiel and Daniel as well.  The imagery of the tree found in the stone panels is not explained in the ancient texts, but it appears that it “represents order more than life … and would therefore be more comparable in its properties to the tree of wisdom in the garden. … The properties of this sacred tree make it the source of wisdom and order rather than the source of life.” (p. 123)

[T]he motifs and themes used in Genesis 2-3 are hardly arbitrary. Instead the story includes concepts familiar to people in the ancient world. … The inspired storyteller is speaking to Israel and is prompted by the Spirit to use imagery that would communicate clearly in that world dealing with issues that were current in that society. We do not have an account that is portrayed as being conveyed to Adam and Eve. It is an account about Adam and Eve being conveyed to Israelites. (p. 123-124)

Walton notes that it is possible that the trees were literal rather than figurative, in keeping with his reading of Adam and Eve as historical individuals, but this isn’t really important.

In Genesis, the trees are best understood in the context of sacred space rather than as isolated trees that happen to be in a garden. … Whether they confer or represent, they provide what is only God’s to give. He is the source of life, which is given by him and found in his presence. … He is the center of order, and wisdom is the ability to discern that order. … Consequently, we make a mistake to think that this is simply about magical trees in a garden paradise. It is about the presence of God on earth and what relationship with him makes available.

At one level, we can simply say that they are whatever the Bible considers them to be (even if we cannot decide for certain), because whether they are literal or not we not, we know their significance. In this way, we commit to taking the Bible seriously and fulfilling the demands of our commitment to the truthfulness of Scripture. If the text chooses to use metaphorical symbols, it is free to do so, and we would be remiss to read them any other way. (p. 124)

Walton doesn’t commit himself to a literal or figurative reading. He simply notes that either is consistent with the authority and intent of scripture.

Finally, The Snake. The serpent or snake is another common symbol in the ancient Near East. Among other things it is a chaos creature bring disorder. All chaos creatures in the Bible are portrayed as being created by God. Leviathan in Genesis, Job, and the Psalms, provides one such example.  Ancient Israelites would not have associated the serpent with Satan. “An Israelite would not give any unique status to this serpent – he is just one of any number of chaos creatures rather than a spiritual, cosmic power of some sort.” And later: “Deception, misdirection and troublemaking are all withing the purview of chaos creatures.” (p. 134)  The result of the serpent’s action  in the story is that evil took root in humanity. God’s priests, in the sacred space of the garden, failed to follow God’s ways. 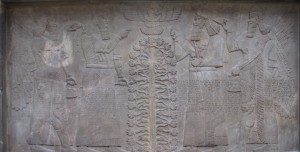 Myth and/or Imagery. Walton concludes his look at the garden, trees, and serpent with a discussion of the role of myth and imagery in the biblical narratives. The term “myth” carries too many negative connotations and he is uncomfortable using this term in the context of the bible.

But the issue goes beyond the labeling of a genre of literature; it concerns the process by which literature of any genre is conceived and composed. The ancients thing differently; they perceive the world in different ways, with different categories and priorities than we do.

In our culture, we think “scientifically.” We are primarily concerned with causation, composition and systematization. In the ancient world they are more likely to think in terms of symbols and to express their understanding in terms of imagery. We are primarily interested in events and material realia whereas they are more interested in ideas and their representation. (p. 136)

The use of imagery is a powerful way of conveying truth. This imagery can be literary or visual.

Visual artists depict the world imagistically, and we recognize that this depiction is independent of science, but not independent of truth. The ancients apply this same imagistic conception to all genres of literature, including those that we cannot conceive of as anything other than scientific. Imagistic history, like that preserved in Genesis, is to history as The Starry Night is to a Hubble photograph. (p. 137)

Walton provides other examples of imagistic thinking in our world – and the way that imagery conveys truth. When scholars or skeptics suggest that Israel was in the habit of borrowing and transforming mythology they convey a negative image of the practice. This, however, misses the point. This isn’t an error or fiction that we should dismiss or discount, but a powerful way of conveying truth.

Some might consider the trees, the garden, and the snake to be examples of imagistic thinking without thereby denying the reality and truth to the account. The author understands trees in a way that does not simply indicate a botanical species of flora with remarkable chemical properties. When we put these elements in their ancient Near Eastern context and recognize the Israelite capacity, even propensity, to think in imagistic terms, we may find that we gain a deeper understanding of important theological realities. (p. 138)

We need to learn to read scripture on its own terms, not in terms of categories that we impose upon it from our 21st century perspective. Genesis is not a scientific history of origins.  To read it as such flattens and distorts the message.

In what ways do the garden, trees and snake need to be “real” to convey truth?

Is imagistic thinking a powerful way to convey truth?

May 19, 2015 Christian Seders: To do or not to do?
Recent Comments
7 Comments | Leave a Comment
"Amen - almost. Not every single American Evangelical pastor is certifiable, though nearly all the ..."
Brad of the North Go Home or At Home?
"John MacArthur is insane. He is a creationist, climate-change-denialist fruitcake. I won't even get started ..."
Brad of the North Go Home or At Home?
""This is great! Visit us for gym tools & equipment!https://www.yanrestrength.c...""
YANRE STRENGTH Papers Be Gone?
"When looking for a solution for hemorrhoids numerous victims periodically spend huge a course in ..."
burakdeniz The Miracles of Creation? (RJS)
Browse Our Archives
get the latest from
Evangelical
Sign up for our newsletter
POPULAR AT PATHEOS Evangelical
1