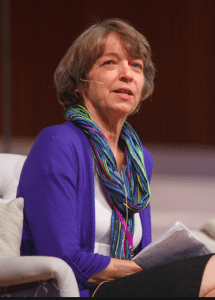 From Arise, by Marianne Meye Thompson:

Marianne Meye Thompson is the George Eldon Ladd Professor of New Testament at Fuller Theological Seminary. While specializing in the Gospels and particularly the Gospel of John, she has written on Colossians, the epistles of John, and various theological topics such as God as father in the Scriptures. She is an ordained teaching elder in the PCUSA, married to John, and proud mom to two grown daughters.

When we think about the question of “women’s roles” in the church today, we are pressed to ask how the Scriptures portray and define the roles that women may and ought to exercise in the church. For some interpreters, the question comes down to offices that women were authorized to hold, or to which they were “ordained.” Thus, one asks: were women called and designated as “apostles” or “teachers” or “overseers” or other apparently somewhat official roles in the church? Backing up a bit, the question has often been asked, were women among the Twelve chosen by Jesus? If not, does this mean that they ought not to serve as “leaders” in the church? In other words, how one conceives of women’s roles today often rests on how one pictures any official positions that they were authorized to hold in the early church.

On this score, the Gospel of John provides an interesting case study. There are two persons who figure importantly in the Gospel: Simon Peter, and the disciple simply known throughout the Gospel as “the disciple whom Jesus loved” (often designated by the shorthand “beloved disciple”). At the end of the Gospel of John, in Jesus’ final recorded resurrection appearance in that Gospel, Jesus commissions Peter to “tend my flock” and “feed my sheep.” In other words, Jesus now gives to Peter a role that he earlier claimed for himself (John 10:1-11), that of shepherd or, in Latin, a pastor. The point is not that Peter becomes Jesus, or exercises the task of shepherd in precisely the same way, but that there are striking parallels between what Jesus has done and what Peter must do as he is entrusted to care for Jesus’ own sheep. The Roman Catholic church traditionally emphasizes the distinctiveness of Peter’s calling; he is the first “pope” of the church. Other interpretations have justified the limitation of the pastoral office to men on the grounds that it is Peter, a male disciple, who is given that role, walking in the footsteps of Jesus to shepherd the people in his charge.But in the last chapter of John, the otherwise anonymous “beloved disciple” takes his place alongside Peter. This disciple is twice designated as “the one who is bearing witness” to Jesus and to the significance especially of Jesus’ death and resurrection (19:35; 21:24). If the distinctive role of Peter is to shepherd Jesus’ flock, then the distinctive function of the “beloved disciple” is to bear witness to who and what Jesus is and brings.The role of witness is also a role that Jesus himself exercises throughout the Gospel of John. In fact, when Jesus stands before Pilate, who asks him whether he is a king, Jesus answers, “I have come into the world to bear witness to the truth” (18:37). To be sure, there are other terms and designations for Jesus–but “witness to the truth” is how Jesus defends himself before the governor of the most powerful empire in the world at that time. “Bearing witness to the truth” is what the beloved disciple also does, most notably through writing the Gospel that bears witness to Jesus.Indeed, the roll call of witnesses in John is long; the following persons or things are all said to “bear witness” to Jesus: John the Baptist, the Spirit, God the Father, Jesus’ own works, Scripture, Moses, his disciples, and the Samaritan woman. Others not specifically called “witnesses” nevertheless speak the truth about Jesus, including the blind man who was healed, and Martha, the sister of Mary and Lazarus. It is often said that the Gospel of John portrays Jesus as being “on trial,” and presents the host of witnesses called to his defense. Women are prominent among them.In fact, one of the striking features of the Gospel of John is the number of distinct stories about women and the witness that they bear to Jesus. Stories unique to John include Jesus’ encounter with his mother at the wedding in Cana (ch. 2) and his entrusting her care to the beloved disciple at the foot of the cross (ch. 19); the meeting with the Samaritan woman at the well (ch. 4); the interaction with Mary and Martha on the occasion of raising their brother, Lazarus, from death (ch. 11); Mary’s anointing of Jesus’ feet after the triumphal entry (ch. 12); and the particularly poignant appearance to Mary Magdalene at the tomb on Easter morning (ch. 21). To two of these women–the Samaritan woman, and Martha–Jesus explicitly acknowledges his identity as Messiah–and this is one of the few places in all the Gospels that he does so. Martha acknowledges Jesus as “the Messiah (Christ), the Son of God”–exactly the confession that the Gospel seeks to elicit from its readers (20:30-31). Mary Magdalene first speaks the words, “We have seen the Lord!”, the characteristic Easter confession in John. In many ways in the Gospel of John, women are exemplary witnesses to Jesus. They take their places alongside John the Baptist, Jesus’ signs, Moses, and others in bearing witness to Jesus. They carry on a task that Jesus himself also exercises: they bear witness to the truth. Being a witness is not precisely an “office.” But there is no higher calling than being a witness to Jesus in the Gospel of John. Simon Peter and the “beloved disciple” are paired alongside each other in chapter 21 as demonstrating two ways of serving Jesus: tending his flock and bearing witness to him. Peter was called to shepherd Jesus’ flock, while the beloved disciple would pen the Gospel that remains, in many ways, the pinnacle of the church’s witness to Jesus. In John’s Gospel, the role of witness, exercised by women, is a role that women continue to exercise when they preach, teach, write, and speak about Jesus to others. In bearing witness to the truth, they fulfill tasks that Jesus assigned to them and to all his flock.

July 3, 2015 Privilege is Blindness (by John Frye)
Recent Comments
4 Comments | Leave a Comment
"WOW UR TESTIMONY JUST SAVED ME. WOW. Thank you praise Jesus. (I feel like that ..."
Luu Saturday Afternoon Book Review: Andrew Farley
"Avoidance of these verses is at the heart of faulty conclusions. Humanistic interpretations are why ..."
Glenn Harrell What To Say When Someone Says ..."
"I think what you should say is: "I don't want to kink shame, but that's ..."
Spirit Plumber What To Say When Someone Says ..."
"Jesus dying temporarily for our sins doesn't really make much sense. Here's why:Let's say I ..."
C Nault What is a “Sacrifice of Atonement”?
Browse Our Archives
get the latest from
Evangelical
Sign up for our newsletter
POPULAR AT PATHEOS Evangelical
1