The Next Big Paul Book is Imminent 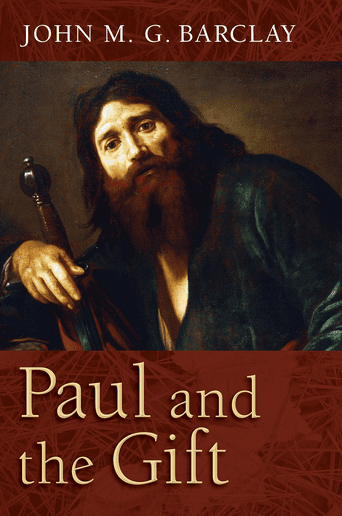 John M.G. Barclay’s about-to-appear book on the apostle Paul (Paul and the Gift) is the next big Paul book, and it will undoubtedly become a major book for all Pauline scholars and all students who are in touch with the vanguard of scholarship, and I hope many pastors will read the book, too. Here’s why: GRACE is a term that everyone seems to think they understand but few have taken a careful study of the meaning of Grace as GIFT and John Barclay’s new book does just that.

Since the book is not yet available, I will give today just a precis of what this book will do and hope you will buy it, read it, and join the conversation early September.

Fundamentally, Barclay’s book will challenge both the classic soteriological model (old perspective) and force the new perspective folks to re-evaluate how grace is understood. Barclay is often connected more to the apocalyptic model of Pauline theology.

A big concept is that the notion of a gratuitous gift that expects no return is an invention of modernity. That is, the notion that grace = gift and that gift = altruism, unconditioned giving to one undeserving (or deserving) is not found as such until the modern era and he traces its origins especially to Luther and to Kant (most esp in its secular forms). One can see here the implications for the radical Lutheran teaching we sometimes here today.

In particular, the anthropology of the gift has raised the possibility that the notion of the “pure” gift, a gift without return, is a historically and culturally specific Western invention.

Allied with this big concept is that gifts in the Greco-Roman and Jewish worlds always entailed obligation and reciprocity. (There’s a lot of nuance that deserves to be brought out here but it can’t be in this context … I have to wait for the book to come out.) That is, “grace” or “gift” establishes social relations, community, and mutual benevolence/reciprocity of exchange and fellowship.

You can see already why this is attractive to me (A Fellowship of Differents): grace/gift, therefore, is at its core both social and personal and not just personal soteriology. It is ecclesial.

‘Gift” denotes the sphere of voluntary, personal relations, characterized by goodwill in the giving of benefit or favor, and eliciting some form of reciprocal return that is both voluntary and necessary for the continuation of the relationship.

“Grace” is a multi-faceted concept best approached through the category of gift. It is susceptible to “perfection” (conceptual extension) in a number of different ways, which do not constitute a unified package. Some who discuss this theme will maximize the [1] superabundance, [2] the priority, or [3] the efficacy of grace, and others its [4] incongruity with the worth of the recipients (as gift to the unworthy). Others again will urge the [5] singularity of grace (that God is nothing but gracious), and some that [6] God’s gifts are given “with no strings attached.” These are not better or worse interpretations of grace, just different, and it is perfectly possible to speak of grace without defining it, for instance, as gift to the unworthy. …

His [Paul’s] theology of grace does not stand in antithesis to Judaism, but neither is there a common Jewish view with which it wholly coincides. …

Paul’s theology of grace characteristically perfects the incongruity of the Christ-gift, given without regard to worth. This theology is articulated within and for Paul’s Gentile mission, and grounds the formation of innovative communities that crossed ethnic and other boundaries. This incongruous gift bypasses and thus subverts pre-constituted systems of worth. It disregards previous forms of symbolic capital and thus enables the creation of new communities whose norms are reset by the Christ-gift itself. Grace took its meaning in and from Paul’s experience and social practice: the nature of the gift was embodied and clarified in novel social experiments. In the subsequent interpretation of Paul, within an established Christian tradition, this motif has played a number of other roles, but has generally shifted from undermining the believers’ previous criteria of worth to undercutting their self-reliance in attaining to Christian norms or their understanding of this effort as necessary for salvation.