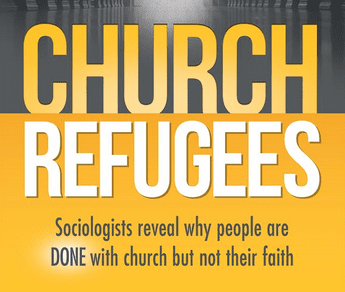 The essence of “church refugees,” or the “dechurching of the former intensely involved church leaders,” is “they’re finding ways to be the church outside of the institution” (27).

I quote from Josh Packard and Ashleigh Hope’s Church Refugees as I set off on a series on this book, one that has solid and rigorous sociological data at the core. I teach at Northern Seminary, and we prepare people for ministries in churches, so I am doubly curious about church refugees — most importantly, why they are leaving and what can be done about it. (Not that I think there’s a fix.) Here are some important introductory observations and citations from the opening chapter in this book.

We are not dealing here with the perennially cynical or with the marginalized or the lazy but with leader-types:

The story that emerged from the data is that people with access to alternative ways of reaching their goals of community and social engagement are opting out of church. In our society, this is typically white people for issues of social class, not because of heritage, tradition, or ethnicity. White people in the U.S. have much greater access to social institutions and systems of power, so when they leave the church, they can find other ways of getting things done. Also, white people generally have much more social and cultural capital than other groups, making it more possible for them to realize their goals without a supporting institution (10-11).

Here are the four major themes of the church refugees, the dechurched, the Dones:

They wanted community.. .and got judgment.

They wanted to affect the life of the church.. .and got bureaucracy.

They wanted conversation.. .and got doctrine.

They wanted meaningful engagement with the world… and got moral prescription.

And what happens to them when they leave (nothing):

If Ashleigh and I could communicate one thing about the demographics of the Dones, it would be that this is an issue of talents and energy, not of numbers. While we have strong suspicions about the rising numbers of Dones, this is, ultimately, not a story of numbers. It’s a story of what happens when an organization invests in training and discipling scores of people and yet does very little to retain them or reengage them when they leave (11).

Nor are these refugees occasional church goers and little more than disaffected pew sitters. These are engaged folks who have consciously chosen to do it another way:

This book is about a wholly different kind of churchgoer. It’s about people who make explicit and intentional decisions to leave the church and organized religion. We call these people the dechurched or the Dones: They’re done with church. They’re tired and fed up with church. They’re dissatisfied with the structure, social message, and politics of the institutional church, and they’ve decided they and their spiritual lives are better off lived outside of organized religion. As one of our respondents put it, “I guess the church just sort of churched the church out of me” (14).

They become church refugees in order to survive spiritually:

They feel they’ve been forced to leave a place they consider home because they feel a kind of spiritual persecution and it would be dangerous, spiritually, for them to remain. They tell stories of frustration, humiliation, judgment, embarrassment, and fear that caused them to leave the church. They remark time and again that they worked diligently for reform within the church but felt the church was exclusively focused on its own survival and resistant to change. If they stayed, they would risk further estrangement from their spiritual selves, from God, and from a religion they still believe in (15).

The church, they feel, is keeping them from God. According to them, the church, not God, is the problem, and they’ve stayed in the church long past the point that it ceased to be fulfilling or even sustaining (16).

Furthermore, they flee the church not because they hate the church. They have, in fact, worked tirelessly on behalf of the church. They flee for their own spiritual safety, to reconnect with a God they feel has been made distant to them by the structure of religion as practiced in organizations (16).

Two broader trends are at least at work: a loss of trust in religious leaders and institutions, and alongside this is an increasing sense that the local church’s message is irrelevant to daily life. Community is a desire as much as ever, but not one that is institutional. The numbers of Dones do not threaten the vastness of churchgoers but the Dones may well indicate the condition of the church in the USA.

But they are telling an important story:

They’re the ones who, prior to leaving, showed up at worship every week and tithed. They organized and participated in small-group activities, Bible studies, worship planning, church councils, elder teams, and a plethora of other activities and services that are the lifeblood of churches big and small. They were the keepers of organizational history and played a significant role in defining institutional identity (21-22).

And here is Ethan’s story that illustrates Packard and Hope’s Refugee (23-24):

So I did campus ministry for years. I learned how to preach, I learned youth ministry, learned biblical counseling, and when I got out I went back to my old church, and they hired me as their youth pastor. Then I did assistant pastoring for three and a half years there, and I ran a youth drop-in center that was sponsored by United Way, where we tutored kids and had organized basketball, volleyball, field trips, and that type of thing. I did youth group for the church, and I led worship, and I led weddings, burials, and that sort of thing. For years did all of that.

When I left after a scandal with the head pastor cheating on his wife, we attended another church a few towns over, and was helping with the youth group there, and then they offered me a position. For the next six years, I was an associate pastor, and we did all the adult Christian education, children’s ministry, led worship, pretty much a little of everything. From there it was on to Florida following my wife’s job and on to another church which dissolved because the elders were stealing church money, and then out to Colorado, where we got involved again. We just can’t help getting involved when we have talents to offer and we see a need, I guess.

Since 2010, though, when we finally left the church, we’ve just done house church where we create and do things with, others rather than for them. I’m done with the top-down, institutional church. I thought we could fix it from within, but we got beat up pretty bad. I know we didn’t always handle things the best way, but at the same time, we kept showing up and volunteering because we felt the church was God’s home.

I don’t think that’s the case anymore. The church is wherever God’s work is being done, and too often the way we were treated and the things I saw happen in the institutional church to other people just weren’t in alliance with what we thought God wanted.

But here’s the thing: I don’t think the institutional church is filled with bad people. I think the church in America is an inherently flawed structure that compels people to make poor decisions. You’re basically judged on how well you can preach and the numbers you bring in. / realize the church isn’t perfect and it’s made up of people who aren’t perfect and I’m not perfect either, but the church needs to see that there are things that are broken about the structure, not the people.

The Leading Cause of Death
Cranach
Related posts from Jesus Creed