We Are (Christian) Naturalists (RJS) 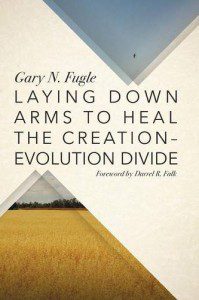 Part III of Gary N. Fugle’s new book Laying Down Arms to Heal the Creation-Evolution Divide looks at the definition of science, the major scientific issues with creationism and intelligent design, and concludes with a discussion of how we might understand God at work in his creation.

In the first chapter of this section, The Face of Science, Fugle provides a definition of science and an explanation of the need for methodological naturalism.

[N]atural science exclusively studies the properties of matter and energy in the natural world, and its hypotheses, predictions, tests, and conclusions are based on empirical evidence pertaining to these properties. … The philosophical conviction that the world operates through discoverable properties is called “naturalism.” Since the methods of natural science focus exclusively on these features, this approach to learning and knowledge is called “methodological naturalism.” …

Fugle uses the example of a ball rolling down a hill as an example. This will be governed by the normal laws of mechanics. If we know all the parameters; the surface, the friction, the slope, the roughness, the mass, and so forth, then the trajectory of the ball can be described with complete accuracy. We step outside the realm of science if we assert an unseen supernatural agent pushing it up the hill or giving it a kick to the right.

This doesn’t mean that there is no God, or that scientists must reject the existence of God. Science does not require philosophical naturalism – the conviction that the natural world is all that exists. But the practice of science is explicitly a quest to understand the regular discoverable properties through which the world operates. As a Christian Fugle certainly sees God behind these properties and laws. He does not eliminate the possibility of miracles where God acts outside of the normal processes of the world, but miracles have a purpose. They are not arbitrary acts.  In general we can reasonably expect God to work within the normal processes and properties of the world.

Christians often complain that this definition of science – restricted to the investigation of the discoverable properties of nature – is an inadequate approach because it rejects the possibility of the supernatural. Some vocal atheists go so far as to say that the success of science based on methodological naturalism eliminates the possibility of God.  This isn’t so and many scientists are religious or spiritual.

While God is excluded from the methods of the discipline, this does not mean there has been a wholesale rejection of spiritual or religious realities. Strong defense of what science is does not constitute any position whatsoever about the existence, importance, or relevance of God and metaphysical truths. To exclude God from the methods of science does not exclude God from life. Christian believers must be careful to differentiate these two things. (p. 71)

Fugle is fully aware, as am I, that there is a “fabric of disbelief” (Kenneth Miller’s term) that runs through the academic establishment. This can result in an environment that ranges from subtle to open hostility toward religious belief, particularly Christian belief. It is important for us as Christians to be able to separate this culture from the science itself. (And it would help if more scientists were also aware of the boundary between scientific and metaphysical statements.) 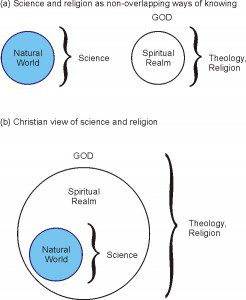 It is also important to realize that the methodological naturalism of science does not mean that scientific and religious ways of knowing are separable and non-overlapping. Nor does it mean that religion must be subsumed in the more rigorous scientific way of knowing. Rather Fugle gives the illustration to the right (imitating Fig. 7.1, p. 85). The separation of science and religion into separate compartments (a) is unsatisfactory. This isn’t a Christian perspective. Rather as in (b) “Science studies the natural world, but this is a subset of the entire realm over which God has involvement and which religion (or theology) studies. This is a Christian view.” God is sovereign over both the natural world and the spiritual realm.

Christians believe that the ongoing mechanisms of the natural world, upon which science depends, are themselves dependent on God. In addition, believers expect that an omnipresent God interacts with these processes to guide the course of events. With this inherent approach to life, Christians necessarily look to incorporate the findings of science into one coherent view that includes God, not to compartmentalize scientific information and spiritual understandings into separate spheres of knowledge. (p. 84)

This background leads us  into two Christian approaches to science that Fugle (and I) find unsatisfactory: Creation Science and Intelligent Design.  There are a number of issues to discuss here, but the most important is that neither approach really practices science as Fugle has defined it. Both start with an appreciation for science and the power of science, but both stray from an effective view of science.

Creation science starts with a particular biblical interpretation of creation and works to fit scientific observations into this framework.  The problem is that it simply does not work. The scientific data is not consistent with this particular interpretation of the Bible.  The arguments put forth to force the young earth time frame on science simply don’t hold up to scrutiny.  There are many reasons why this is so. Joel Duff at Naturalis Historia (another Christian biology professor) digs into many of the issues. I have promised a post to look at some of these in the near future.  It seems far more reasonable that it is our interpretation of scripture that is in error than that all of this scientific information is being interpreted incorrectly by such a large community of scientists – many of whom are Christians.  This isn’t flipping the picture to put God in the small blue ball with science as sovereign over all. Rather it is an acknowledgment of the nature of biblical revelation through the written word and the nature of the world as God’s creation.

Key point – to the scientist it isn’t a matter of “believing in evolution.” This isn’t (for most of us) a metaphysical framework.  And evolution, like gravity and quantum mechanics, isn’t “only a theory” to be contrasted with proven ideas. A theory is the highest level in science “A theory in science is a well-supported collection of ideas and explanations; its concepts have been tested by numerous observations.” (p. 91)

A distinctive character of the scientific process is that it promotes skepticism and purposely avoids the notion that the final word has been spoken on any subject, Ideas are always subject to new testing, analyzed from new angles, and open to modification. Currently supported and accepted explanations are viewed as our best conceptualization for the present. If science is to remain dynamic and forward-moving, there must be future investigations ans anticipation of new findings. Scientists like to say an idea is “well supported” rather than “proven.” (p. 91)

To paraphrase Fugle (p. 100), we embrace evolution because it is extremely well supported by empirical evidence and is a comprehensive and useful scientific concept. The framework of evolutionary biology makes sense of a large swath of data. The pieces fall into place. This doesn’t mean everything is now known (far from it!), but it does provide coherence to a broad range of empirical data.

Intelligent Design is driven by a desire to counter the naturalist materialist influences in our culture. This is a fine goal, but Fugle argues that the approach is driving conflict and disinformation rather than bringing light to the situation.  All Christians belief that the world is intelligently designed by God. But we don’t all agree that evidence for God (or any designer) should be expected through scientific investigation. It is fundamentally (protestations notwithstanding) a God of the gaps approach. There are intrinsic gaps in the power of natural explanation that only God can fill. Even the “inference to the best explanation” argued by Stephen Meyer is a gap filling approach because it relies on vacancies in current understanding to make a designer the best explanation. 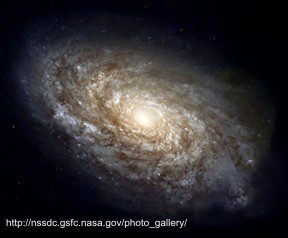 Why are we looking for a scientifically detectable God?

The Bible proclaims that God is evident in the natural world. Psalm 19:1 announces. “The heavens declare the glory of God; the skies proclaim the work of his hands.” Romans 1:20 asserts, “For since the creation of the world God’s invisible qualities – his eternal power and divine nature – have been clearly seen, being understood from what has been made …” These truths were apparent, long before scientific inquiry, to those who had the faith to perceive them. The same truths are evident today in the awe, wonder, and beauty of nature and it is through these senses that Christians understand God in nature. We do not need scientific studies to expose God in the natural world and I believe Christians are looking in the wrong place when they anticipate that empirical research will indisputably reveal him.  The greatest irony is that as some Christian scientists search for an elusive God found only where science knowledge is lacking, we point people away from a more straightforward perception that he has been apparent all along. (p. 112)

Science is not a key path for revealing or proving God. Science is a study of the normal processes in God’s creation (whether the scientist acknowledges God or not).

Fugle concludes Part III with a discussion of divine action, miracles, and the harmony of causes in the “natural” world.  It is not an either-or proposition. Natural explanations do not eliminate God from the picture. In many ways this is a personal discussion of the ways in which he has found harmony between the Christian faith in God and the discipline of scientific inquiry.  A chapter well worth reading.

How should we view the relationship between science and Christian faith?