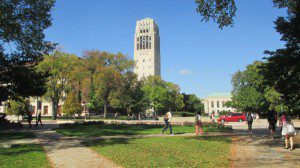 In his first letter to the Corinthians Paul includes the oft quoted statement “I have become all things to all people so that by all possible means I might save some.” (9:22) One application of this and the surrounding context is the need to meet people where they are. In order to do meet people where they are it is necessary to make the effort to understand the contexts in which people live and the ways in which they think. There are a multitude of ways this can play out, and it will be different for an inner city church, a rural church, or a suburban church.

As an academic and a scientist in a community dominated by a local University this need to meet people where they are is something I have pondered often. In this environment, a church or a pastor that desires to make an impact beyond undergraduate students could be well advised to understand the academic environment, the way academics think, and the experience of academics in Christian communities.

J. Aaron Simmons put up a pair of posts at Seminarium recently, Seven Things I Wish All Pastors Knew About Academics—Part 1 and Part 2. This isn’t intended as a criticism, or some statement of superiority.  It is a desire for understanding. Aaron’s list focuses particularly on the experience of Christians in Christian communities, but some (especially 3 and 4) are equally important for outreach. Some items on Simmons’ list are not as relevant for scientists as for social scientists or humanists (Simmons is a philosopher), but they are all worth some discussion. You can read Aaron’s posts in their entirety at the links above. I will summarize the list including a few select quotes and add a few comments of my own.

1)  Academics, as academics, are not pastors—and we are not trying to be.

“Often confusion and mistrust result from the suspicion that academics are threatening to the office of the pastor. This is unfortunate and rarely grounded in reality. Academics should be threatening to sloppy thinking, falsehood, unjustified assertions, and resistance to critique, but these are all things that pastors should seek to avoid as well. Indeed, if pastors saw academics as resources in the way that they see coaches, business owners, and civic leaders, then the life of the mind and the life of faith might be more commonly integrated in churches.”

2)  Academics generally understand that disagreement does not imply disunity.

3)  Appeals to “non-negotiables” are often problematic for academics due to a general comfort with ambiguity.

4)  Asking critical questions is a primary way in which academics build relationships.

“Christians often protest against the stereotypical ways in which they are presented in popular culture. Similarly, academics don’t like being stereotyped by Christians as simply being liberal atheists who are dangerous to the spiritual life of those who would be swayed by our influence.”

7)  Many academics realize that the life of the mind and the life of faith are not at odds. 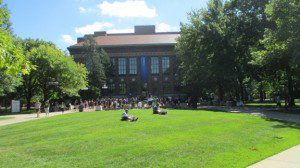 There are some points that Simmons makes that I disagree with, or would argue differently. But this is OK (disagreement doesn’t imply disunity). Sometimes it is simply that my perspective as a scientist in a secular university differs from his perspective as a philosopher of religion. Sometimes though, I wonder if it is because we have a slightly different view of Christian faith. I think that there are some things that are “non-negotiables” in the Christian faith, not because they can’t be questioned or shouldn’t be explored, but because if one moves in certain directions one is no longer a Christian. Of course, the only way one learns what is truly “non-negotiable” is by asking critical questions and digging into the how and why. In the sciences there are certainly things that become “non-negotiables” simply because the arguments are so strong.

The first point is critical. Pastoring well is a hard job requiring a skill set that most academics don’t have. I know that I have not the patience, energy, or people skill for it myself.  I’d much rather think and write and teach. The same is true of many colleagues. We shouldn’t be a threat, but sometimes seem to be viewed as threats. I suspect that part of the problem is an implicit hierarchical approach to church. There is an attitude among many (not all) pastors and churches that the pastor is to be the go-to-guy and should be able to supply the answers on issues concerning Bible, theology, and Christian practice. This can spill over into a posture that prevents open discussion with fellow Christians who have expertise in these or related areas. We all need to be able to move between the postures of student and teacher and to cultivate the skill of listening well.

Simmons’ fourth point is where I’ve run into the most trouble. True engagement from an academic will always involve critical and digging questions. We have trained for years to question, to think critically, to read closely, to dig into details, to look at things from a variety of angles. Asking questions rather than accepting pronouncements is part of the culture. I don’t think that I’ve had pastors take this as a sign of arrogance or disbelief, but I have known those who find it threatening. Academics simply don’t take things on authority.  The first impulse is always to question until a level of understanding is obtained or a weakness is exposed.

There is a corollary to this – the aim of education in the academy is to make peers out of students. I have succeeded when my students turn around and start contributing to my education.  It isn’t a threat when they challenge me, but the goal. I expect to have to defend my position. This is how people learn. Shouldn’t pastors and churches have a similar goal … to make peers and disciples out of parishioners? Too often the goal seems to be to accumulate followers and if this means sticking with milk so be it, rather than to produce peers, adult Christians, capable of eating solid food.

The sixth point deserves more comment as well. We all have a tendency to develop an insider mentality. Sitting on the edge of two worlds can be challenging. 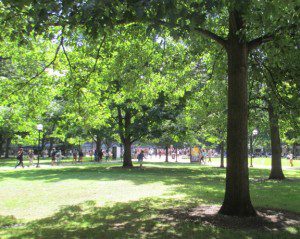 Being a Christian in the University can mean being something of an outsider. It isn’t overt hostility (often), but a combination of different priorities and focus and a bit of bemused wonder, being different.  There is, as well, a general assumption in the university that intelligent people know that Christianity can’t be true, a general negative impression of Christians, along with an underlying assumption of secular humanism. I have known several Christian graduate students who have opted away from a career in academics because of this atmosphere.

The Church isn’t really much better.  We’ve been part of a church for many years where a wide range of views are held, some more openly than others.  It is fairly conservative, but not rigid on non-essentials, and with a fairly small list of essentials. We’ve been comfortable here. Many churches in the area would not be as open.  But even here I’ve sat through a number of speakers, some guests, some local, several with my then young children sitting next to me, where the message was to beware of the professors (the “them” down the road) who sought to destroy the faith.  To be fair, this has happened seldom over the last decade. It was more common in the past. But many churches are worse.

On another occasion at a different church a movie was shown, an apologetic defense of the faith, with a humorous scene making fun of the objections of the scientists complete with white lab coats, microscopes, and bubbling test tubes. “They” attack the bible “we” know it’s true. I was uncomfortable, but most in the audience saw nothing wrong with portrayal.

And then there are those who dismiss Christian academics (unless they hold the “right” positions) as having caved to peer pressure and the pursuit of worldly advancement. This is insulting. Most of us are trying hard to find the right road to walk from conviction.  Of course we could be wrong on some issues, but a dismissal questioning motives simply enlarges the gulf between academics and the church.

There is the same implicit assumption at work in many churches as there is in the University. “We” and “they” are separate.

How would you respond to these seven points?

Would you add anything?

Are any of these points off the mark?

Is there a place in the church for critical questions and deep engagement?

September 24, 2015
If You Believe in Restorative Justice... (by Wye Huxford)
Next Post

September 25, 2015 Oprah and Brother Jesus
Recent Comments
20 Comments | Leave a Comment
"This article starts a series on what A Course in Miracles (ACIM) implies when acim ..."
burakdeniz The Miracles of Creation? (RJS)
"It is your confidence in these thoughts that needs pardoning and what causes absolution a ..."
burakdeniz The Miracles of Creation? (RJS)
"Scot, 1 Cor 16:15-18 asks the Corinthians to submit to the leadership of Stephanas and ..."
Richard Fellows Finishing Well With Clement
"I can only guess that they look at Trump as a kind of god like ..."
D.M.S. The Gospel of With Us and ..."
Browse Our Archives
get the latest from
Evangelical
Sign up for our newsletter
POPULAR AT PATHEOS Evangelical
1