We perhaps all know the Type, the person who is so heavenly minded they are no earthly good. They don’t seem to care about injustice, they don’t seem to be bothered by tragedies, they are not moved by sex trafficking or AIDS or homelessness or … by anything but their own spiritual life, that of their loved ones, and where they will end up when they die.

The solution to this for many has been to (1) deny heaven altogether or more commonly (2) to say it is all speculation. I understand the frustration of these folks because if the so-called spiritual life is only for the spirit or of no use to real life now … well, there’s something very seriously wrong.

The God of Israel reprimanded Israelites who were spiritual but not earthly — fasting that does not relieve the poor is not right, Isaiah says. The laws of Moses constantly made provision for the welfare of the poor and widows and orphans. Jesus constantly concerned himself with healing the sick and socializing the ostracized and welcoming to the table those who were not otherwise welcomed. He did this because his heavenliness turned him into the ultimate form of earthliness.

Sometimes it seems there are two cheering sides in the gym. One group of cheerleaders yells out, “More heaven!” and their fans repeat the words, while the other group yells out, “More live now!” and their fans declare the same. Gary Scott Smith responds more to the first group of cheers when he says, “If an afterlife exists, wordliness is escapism.” I heard escapism in my childhood Christianity whenever we sang Jim Reeves’ famous song, “This world is not my home, I’m just a passing through.”

But the other side has a notable list of fans, including the well-known liberal theologian-pastor of Manhattan’s Riverside Church, Harry Emerson Fosdick, who once said, “Our mission is not to get men to heaven” but “to bring heaven to earth.” Standing alongside Fosdick is Charles Reynolds Brown, former Dean at Yale Divinity School, who dressed up Fosdick’s statement with concrete realities: “The true mark of a saved man is not that he wants to go to heaven” but instead “that he is willing to go to China, or to Labrador, to the battlefield of France, or to the slums of a great city” so he can participate in building “the kingdom of God on earth.”

Some on the second side make the rather audacious claim that those who spend their time thinking about a far off heaven will fail to engage culture and the world already near to them. Those who make this claim know nothing of the facts. C.S. Lewis once said “If you read history you will find that the Christians who did most for the present world were just those who thought most of the next.”[iv] I fear that more often than not that what those persons are really saying is that they themselves don’t believe in heaven and think this Christian conviction is more or less tomfoolery.

So, again, What are Heaven People supposed to be like now?

Here’s my list, and it is dependent upon my understanding of heaven — not as an ethereal place for souls and spirits but as the new heavens and the new earth (I call this “Heaven” with an upper case H vs. present heaven which has a lower case h). That is, the new heavens and the new earth will be a flourishing and thriving and robust city in which God’s beloved society lives in justice, peace, and love.

1. Heaven people trust now. If Heaven is God’s promise made sure by the resurrection of Jesus, the proper response is to trust the God of promise.

2. Heaven people imagine now. Fired by the kingdom vision of Jesus we ought to be the emperors of imagination.

3. Heaven people plant and build now. God’s world is good and we enter into that goodness by making it all it can be.

5. Heaven people with others now into God’s beloved community. Heaven is not for solitary lives; it’s a very social place. I see church as God’s space for kingdom life here and now.

6. Heaven people forgive now. If in Heaven all things will be made right, including confession and forgiveness and reconciliation, heaven people are fired by Heaven to bring forgiveness into reality now.

7. Heaven people “melt snow” now. (When Aslan enters into the land of the White Witch the snow she cast over the land began to melt.)

October 5, 2015
How Much Social Capital do you have at Church? (by Michelle Van Loon)
Next Post 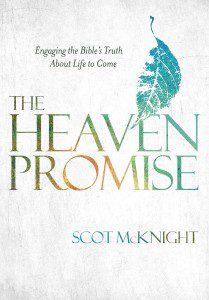 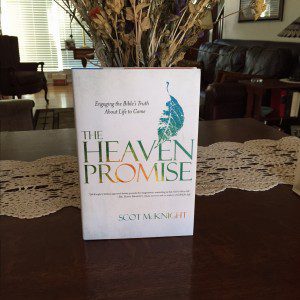 The Abbey at Ettal
The monastery or Abbey at Ettal in Germany is an important destination...
view all Evangelical blogs
What Are Your Thoughts?leave a comment
Copyright 2008-2021, Patheos. All rights reserved.
Close Ad