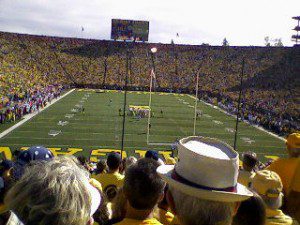 I am traveling this week – and leading a rather time-intensive (and exciting) experiment.  As a result here is a favorite, lightly edited post:

Are we fans or players?

The following was making its way around Facebook. It is not new, however. There was a similar list on the door of the bathroom (where it has a captive audience) at my parents’ summer cabin for several years. I am not sure who wrote it, or when these lists began to be passed around.

This list raises a number of interesting issues worth some thought and some discussion.

1. The coach never came to visit me.
2. Every time I went, they asked me for money.
3. The people sitting in my row didn’t seem very friendly.
4. The seats were very hard.
5. The referees made a decision I didn’t agree with.
6. I was sitting with hypocrites—they only came to see what others were wearing!
7. Some games went into overtime and I was late getting home.
8. The band played some songs I had never heard before.
9. The games are scheduled on my only day to sleep in and run errands.
10. My parents took me to too many games when I was growing up.
11. Since I read a book on sports, I feel that I know more than the coaches, anyway.
12. I don’t want to take my children because I want them to choose for themselves what sport they like best.

As I read this list I gave a laugh and saw the truth in the rather weak excuses people often give for leaving a church or the church. Even excuses for leaving the faith all together. There is an important message and insight here. However, as I read it I began to wonder if there is, perhaps, another message as well.

Think about it. This list equates churchgoers with spectators at a sporting event. … But is this a good analogy?

Perhaps part of the problem is that we all, Christians and non-Christians, laity, clergy, and leadership tend to view church in this spectator mode.

Perhaps a better analogy would be to equate Christians with the team, not with the spectators. This turns some of the reasons in the list on their head – but strengths the foolishness of others.

Spectators watch, the team participates. The coach does not visit the spectators (except college coaches to solicit donations from the very rich). The coach invests himself in training the team, however, and any good coach knows his players. Players in general don’t know more than the coach – and a player who thinks he or she does on the basis of a book will most certainly be set straight. But a wise coach will listen to the players who have proven themselves (look coach this play will work …). Players are not there for the band (unless they “play” in the band). Nor are the players there for comfortable seats.

I am not a pastor, and I have not quit watching sporting events, although I do so much less often these days. Once upon a time I was deeply connected with my local sports teams, feeling a part of the group – a success when the team succeeded, and depressed, as though I had failed, when they lost. This has changed. I still enjoy watching skillful competition, but I have put an intentional emotional distance between myself and my favorite teams. I am, after all, a spectator, not a participant.

Perhaps it is simply wise to reserve commitment for those groups in which we are participants rather than spectators.

Spectators often leave unchanged, the team practices to learn. When I put up this list a couple of years ago a commenter noted that we need to be participants in the local gathering, but this is preparation for our role as participants in the mission of God.  The primary goal is not self-fulfillment.

Spectators are individuals, the team … well it is a team.  The team has to learn to get along, to help each other, to work together. Generally the team has a bond as a body working for a common goal.  Fellowship is an important part of being a team. The spectators have an entirely different experience.

Shouldn’t a local gathering of the people of God should be made up primarily of participants, the team, not perpetual spectators? This doesn’t mean that it should be an insider club shunning the spectators. We should be inviting them to join the team. But we also shouldn’t be surprised if spectators leave for what seem rather flimsy reasons.

Where is the original list good? Where does it fall short?

October 15, 2015 Mohler's We Cannot Be Silent
Recent Comments
7 Comments | Leave a Comment
"Avoidance of these verses is at the heart of faulty conclusions. Humanistic interpretations are why ..."
Glenn Harrell What To Say When Someone Says ..."
"I think what you should say is: "I don't want to kink shame, but that's ..."
Spirit Plumber What To Say When Someone Says ..."
"Jesus dying temporarily for our sins doesn't really make much sense. Here's why:Let's say I ..."
C Nault What is a “Sacrifice of Atonement”?
"Any updates on when it will be released???"
Brian Kelly The “Second” Testament
Browse Our Archives
get the latest from
Evangelical
Sign up for our newsletter
POPULAR AT PATHEOS Evangelical
1

The Opium of the People
Cranach
Related posts from Jesus Creed