The Armor of Light (a review)

Editor’s Note: This piece is part of a conversation Patheos is hosting around the new film The Armor of Light. Find more perspectives here.

“If you, even you, had only recognized on this day the things that make for peace! But now they are hidden from your eyes.” 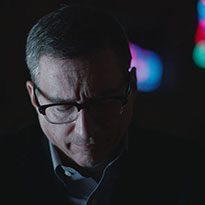 “If you see the world as very narrow, and there is a certain narrow category of good people whose lives should be preserved, and then there are all these other very bad creatures whose lives don’t matter, or whose lives can be easily taken, that contradicts God’s view of the world.”

The Armor of Light opens with an old clip of Rob Schenck during an anti-abortion protest, holding up a replica fetus and pleading, “This isn’t a political issue! This isn’t an issue of rights! This is a dead baby!” The movement’s rhetoric stressed the “sanctity of life” as an issue that could transcend traditional political categories.

Schenck then describes his horror at how the anti-abortion movement turned violent. If the people he led, under the banner “pro-life,” were capable of this kind of violence, Schenck surmises that he must be capable of it as well. Thus, in the film’s introduction, Schenck has provided an insight that should challenge both 2nd Amendment champions and gun control advocates.

Wayne LaPierre, the head of the NRA, says “the surest way to stop a bad guy with a gun is a good guy with a gun.” Hillary Clinton is not shy about her intention to keep guns out of “the wrong hands.” Both of these perspectives assume a shared objective knowledge of who should be deemed fit or unfit to wield lethal force. They do this by denying the complexities of human social life. Who are the good guys and the bad guys, and how would we recognize them? If we agree that “criminals” (as an abstract category) should not have guns, we assume that one’s track record with the criminal justice system tells us something deeply true about that person, and to some extent, we ignore the way the criminal justice system disciplines communities of different racial and socioeconomic status. If we use the criteria of “mental health,” we appeal to a purportedly objective mental health system which we understand to be able to deliver relevant diagnoses (and in the process we stigmatize those who suffer from mental illnesses).

The question posed to us by the current political debate over guns is “how do we control the rampant violence in our nation?” The answers to this are preselected: tighter regulations or total deregulation. Before answering, we might consider how this question is rooted in a mentality that assumes a “we” that should take control. This “we” might be the police, or the federal government, or the “good guys” in LaPierre’s imagination. As Christians, perhaps we should pose our own question instead. How do we follow Christ in a world saturated by fear and death?

In the relentless pursuit of power (power to regulate, power to kill), Christians can be the ones to acknowledge that we are not the objective, rational, omniscient people that this kind of power requires us to be. We know that all of creation is warped by sin, and that we are as prone as anyone to fits of anger and rash judgment. In a culture which conditions us to see black bodies as threats, a knock at the door or a request for help can be fatal. We don’t perceive all the ways that God is at work in the world bringing redemption. Schenck gives us an example of how, through the sacrament of confession, we can be honest about the ways that we are unknowingly shaped into people who are capable of atrocities and accidents that we can not foresee. This provides incredible relief to the anxiety produced by a culture which Schenck describes as having a “constant defensive posture.” In an age of terrorism and Homeland Security, where we take for granted a military budget greater than the combined budget of the next ten nations, we might admit that we have not developed the kind of imaginations that believe another posture towards the rest of the world is possible.

When trying to understand why a militantly pro-life pastor would make (what he understands as) a radical shift in strategy by beginning to address the issue of American gun culture, we have to accept that perhaps he is working with different presuppositions than we are used to. The question for him is not what the Constitution permits us to do, but how we can best follow Christ.

The film goes on to portray a much older Schenck touring the country, talking to pro-life congregations about issues related to guns, and unsurprisingly, the most common appeal they give in favor of Christian gun ownership and gun use is “our Second Amendment right.” But for Schenck, both Roe v. Wade and the Second Amendment seem to have very limited usefulness in these discussions.

This suggestion makes some people uncomfortable. It is much easier to talk about what we as Americans have a right to do, rather than what we as Christians ought to do. But when we make this concession, we accept that liberal democracy should be the primary frame for our ethical deliberations. Even when we acknowledge the priority of peacemaking or reconciliation, these considerations have already been delimited by the larger frame we have adopted.

Schenk’s confession rang true for me. The first time I fired a gun, I felt all the adrenaline I might have expected, but along with the visceral thrill, it opened up fantasies. I found myself thinking (perhaps wishing) that someone might enter my home with ill intent, and imagining that I would blast them away – of course, well within the limits of whatever my state law considers self-defense. In this way I have, on numerous occasions, committed murder in my heart. Now when I see a weapon, I feel like Frodo felt with the ring. There is a mysterious attraction, but I know what I might do with it, and what it might do to me.

Most of the time I am a responsible citizen, who could pass a basic gun safety course, and would do my best to only use force when I believe it to be absolutely necessary. But I am also a finite creature, whose sense of the world is thoroughly warped by sin. I get angry sometimes, and can’t think straight. I am still not free from anxiety or depression. In an Implicit Association Test, I show at least a moderate preference for white people. To put myself in the position of executioner would be a denial of all the ways I know that I am fallen, and indeed deserve death myself.

Some people tell stories that characterize shooters as monsters, almost a breed apart from their fellow humans. Christians tell a story in which we are the worst of sinners, saved by God’s grace. Some people understandably desire to be like gods, knowing good and evil. Christians have good reason to instead embrace our own creatureliness.

We have as our example one who lived in a world no less violent and threatening than our own, and yet refused to participate in the cycles of violence that seemed to be the only option. Until his last moments, voices compelled him to deny death, to save himself. Legions of angels and well-meaning disciples were ready to take out the obvious targets. Yet even when the lines between good guys and bad guys seem so clear, God requires more of us than simple judgment. We still want to make our enemies the personification of evil, ignoring Paul’s reminder that our battle is against principalities and powers, not against flesh and blood. Malchus was a clear and present danger, but Jesus extended a hand to him in restoration. The crucifiers, who by all other counts deserved to be annihilated by legions of angels, instead received unconditional forgiveness. To everyone’s surprise, Jesus’ response to evil was to allow it to do its worst to him, to bear our sins and thus reveal the “things hidden since the foundation of the world,” making a “public spectacle” of the sin and death that had enslaved humanity. God’s answer to the death wrought by humanity was to bring new resurrection life. And if the powers have indeed been disarmed, then Christians are witnesses to new possibilities for enemy-love that have been opened up in Christ.

Until his last moments, voices compelled him to deny death, to save himself. Legions of angels and well-meaning disciples were ready to take out the obvious targets. Malchus was a clear and present danger, but Jesus extended a hand to him in restoration. The crucifiers, who by all other counts deserved to be annihilated by legions of angels, instead received unconditional forgiveness. To everyone’s surprise, Jesus’ response to evil was to allow it to do its worst to him, to bear our sins and thus reveal the “things hidden since the foundation of the world,” making a “public spectacle” of the sin and death that had enslaved humanity. God’s answer to the death wrought by humanity was to bring new resurrection life.

Guns tempt us to live in a different reality, where Jesus is not Lord and thus we must take it upon ourselves to enact the only brand of justice available. This is a reality where we are invited to deny our own fallenness, our own subjectivity, our own mortality, our own participation in patterns of death and violence. We are asked to deny God’s choice to be the One who is with and for the people we are prepared to kill. The modern world can be terrifying, and it is almost impossible to imagine redemptive possibilities for situations where we or the ones we love are threatened. Guns help us reconcile that tension, assuring us that the lesser evil is the best we can hope for.

Schenck asks this question in the film: “when is a Christian permitted to use a weapon in a lethal fashion to take a life?” This question can only be answered if first we ask whether we really believe Christians should be peacemakers, participating in Christ’s ministry of reconciliation. If so, how can we work towards redemption and life? At this point in the dialogue, we are no longer obsessed with the traditional political categories demarcating what we are and are not permitted to do, but instead we consider together what kind of people we are to be. Rob Schenck’s film makes a powerful case that we are to be people who receive life as a gift from God – with no caveats or exceptions.

October 20, 2015
Impact of Helicoptering, by someone who knows
Next Post

October 21, 2015 The Seven (by Jonathan Storment)
Recent Comments
0 | Leave a Comment
""
Queenofthefuzzybugs The (Non)Wesleyan (Non)Quadrilateral
""
Xanthrince JesusCreed.org Blog Prayer
""
William Ristau Writing In Your Life
"'This renewal began first with the renewal of the people of God (chapter 5 or ..."
Kostya2 Putting the Bible Together
Browse Our Archives
Related posts from Jesus Creed