A Proposed Model for Egalitarians: An Honest Tension 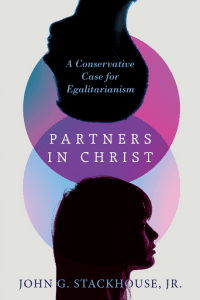 We think with and inside models or theories. What does a model of egalitarianism look like? John Stackhouse proposes a model in his new book Partners in Christ: A Conservative Case for Egalitarianism.

Before we get to his model, a point about method: we can construct a model on the inductive method by examining all the bits and pieces and theories or we can enter into a model with the expectation of challenging a model by examining the evidence and the counter theories. Stackhouse proposes that model, and I have to say that this is the way most of us think about most topics. Think about how we think about politics or economics: how many of us have examined the facts and the theories vs. how many of us have a theory and the modify it as life takes us on its journey?

Here are two approaches to his model. After growing up in a conservative complementarian and patriarchal model, Stackhouse’s mind changed over time into an egalitarian model. Thus, he begins with what life presented to him:

I did not want to think that the Bible was hard to understand about gender, however. I wanted to think simply and clearly about it. In particular, I wanted to be a feminist all the way (back before feminist became the “f-word” that no decent person would use in public). I believed in women and men as coequal partners before God, bearers together of God’s image, with no job or role or responsibility closed to either of them except where sheer biology dictated that only one sex could bear children. This simple position made the most sense of the world around me, made the most sense of my experiences of capable women both within and outside the church, and made the most sense of my relationship with my wife. But an egalitarian position did not make the most sense of the tradition of the church, and neither did it square with a number of Bible verses that seemed forthrightly to forbid a woman from exercising coequal leadership in the family or the congregation (44).

I propose, then, a paradigm of gender that does, indeed, draw no lines between men and women as to role in home, church, or society— beyond those required by biology (45).

But this must be examined and challenged at places. So he begins with equality. He states the proposal this way:

There are lots of scriptural clues, therefore, to indicate that the egalitarians are right: God originally intended women and men to be coequal partners in stewarding the earth, without one being subordinate to the other, and God has never rescinded that mandate. Indeed, in God’s renewal of all things, in his great salvation plan to restore shalom, men and women will treat each other as they were intended to treat each other—and we already see this renewed order in the inbreaking of the kingdom evident in the New Testament (48).

But he is willing to let this be challenged in the following considerations, and I call this Stackhouse’s honest tension:

First, the testimony of most of the Bible—from Genesis 3 until the last epistles of the New Testament—bespeaks an overwhelming pattern of patriarchy. Men are in charge, and they are supposed to be in charge, for almost all of the Bible.

Second, God depicts his own relationship with Israel, and then Christ’s with the church, in terms of a patriarchal marriage of nonequals.

Third, Jesus did indeed welcome women into his circle of disciples—but not his inner circle.

The strategy is one of divine accommodation to the human condition for the sake of the gospel mission but, in light of the inbreaking of the kingdom of God, we are to see the kingdom over time to begin to be seen more and more. He states this in a question:

What would our understanding of gender look like, however, if we took the “already, but not yet” principle seriously? What if we were to expect, instead of one extreme or the other, an appropriately paradoxical situation: a slow and partial realization of gospel values here and there, as God patiently and carefully works his mysterious ways along the multiple fronts of kingdom advance? (55)

Here is an example of what this looks like:

I suggest that Paul is guided by the Holy Spirit—even used by the Holy Spirit perhaps without his full awareness of the implications—to do two good things simultaneously: (1) to give the church prudent instruction as to how to survive and thrive in a patriarchal culture that he thinks won’t last long; and also (2) to maintain and promote the egalitarian teaching that is evident throughout the Bible and dynamic particularly in the career of Jesus and that in the right circumstances will leave gender lines behind (67).

when society was patriarchal, as it was in the New Testament context and as it has been everywhere in the world except in modern society in our day, then the church avoided scandal by going along with patriarchy, even as the Bible ameliorated it and made women’s situation better than it was under any other culture’s gender code. Now, however, that our modern society is at least officially egalitarian, the scandal (ironically enough) is that the church is not going along with society, not rejoicing in the unprecedented freedom to let women and men serve according to gift and call without an arbitrary gender line. This scandal of keeping women subordinate to men impedes both the evangelism of others and the edification—the retention and development of faith—of those already converted (71).

Patriarchy, then, for him is a divine accommodation and not the will of God. This is seen in the parallel to slavery.

So he comes to this conclusion about his model, to accommodation, and to a redemptive movement in history:

the fundamental practical question today is this: What is God calling Christians to do in regard to gender when society itself shifts to egalitarianism? I am arguing that there no longer remains any rationale for the woman to remain in the once expected role of dependence and submission—just as there isn’t any rationale for the grown-up child to keep acting as if he requires his parents’ direction as he did when he was little. When, under the providence of God and the ongoing, spreading influence of kingdom values, society opens up to the abolition of slavery or the emancipation of women, then Christians can rejoice and, indeed, be in the vanguard of such change—as we have been in both causes. The dark irony remains today, I repeat, precisely in Christians lagging behind society and still requiring a submissive role for women—a posture that now is a scandalous mirror image of the scandal that egalitarianism would have caused in the patriarchal first century (91).