That is Wisdom! (RJS) 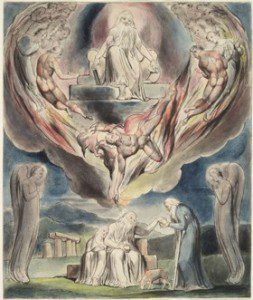 The last passage considered by Walter Moberly in his excellent book Old Testament Theology: Reading the Hebrew Bible as Christian Scripture is Job 28 read in context with Job 1-2.  We looked at this chapter earlier when working through the book of Job (Oh Where Wisdom? (Hint – Not in Science)). Moberly agrees with John Walton that Ch. 28 is a wisdom poem spoken by the narrator. Tremper Longman III, on the other hand, reads the poem as spoken by Job.  Both choices have merit, and the precise context of the poem is difficult to place with certainty.

The book of Job is a thought experiment. No reading of Job is complete without consideration of the genre and setting for the speeches that comprise most of the book. First, Moberly agrees with Longman and Walton that this is not a historical account. It is “an example of narrative theology, in which the imaginative world of a story is used to explore and commend a particular understanding.” (p. 257)  The book of Job is a parable of sorts designed to make a point, not a historical account of a wager between God and Satan.

We shouldn’t get hung up on the loss suffered by Job’s wife, the deaths of his children and servants, or by the (in)justice of it all.  This simply isn’t the point of the story.  Job’s family and wealth serves to indicate his situation in the story.  Job’s family and servants are more akin to props in a play than to real persons. Job is portrayed as an exemplary human (“the most glowing and positive character depiction in the whole Hebrew Bible” (p. 245))  His wealth is fabulous and his piety exemplary. God himself commends him to the opponent and God makes no qualifications. His undeserved suffering set the stage for the speeches.  The opponent (ha-sātān) should not be viewed as Satan; the appellation is not a proper name, but the description of a role.  “[He is] an otherwise unknown member of the heavenly court – “the satan/opposer” – about whom we know only what we are told here: he gets around on earth so as to be familiar with its inhabitants (vv. 7, 8a), and, as we shall see, asks awkward questions.” (p. 248)  Both Walton and Longman agree with this (see The Accuser is Not Satan).

Moberly suggests that the question at issue in Job is “Can a human relationship with God be anything other than self-serving, and if so, how could one tell?” (p. 257) In his commentary Tremper Longman phrases the question a little differently: “The main question addressed by the book of Job, is who is wise?” The answer according to Longman is that wisdom is found only with God and that the only appropriate human response is fear of the Lord.  John Walton in his commentary sees the purpose of the book of Job as addressing the question of suffering in the world, with the conclusion that we must trust the wisdom of God.

Where is wisdom found? However one reads the rest of the book, the poem of chapter 28 is focused on wisdom.  “The poem begins with an elaborate account of human ability to discover that which is widely held to be supremely precious: silver and gold.” (p. 263)  Moberly uses the NRSV and I will follow suit:

This is followed by a refrain:

Humans have a remarkable ability for reason and invention. In the ancient world the mining of silver and gold is an impressive example. In our day it might be something different connected with the limits of our science and technology.  But the fact remains that human ingenuity and resourcefulness is not up to the task of obtaining and controlling wisdom. “In the places and by the means whereby they discover and get hold of other things, humans cannot get hold of wisdom.” (p. 263)

Nor can humans purchase wisdom.

Wisdom cannot be bought, it is not that kind of thing.  Even a king’s ransom is insufficient for the purchase of wisdom. All human resources, reason, ingenuity, wealth, and power are unable to locate and secure wisdom.  Wisdom is not a resource of the earth. This passage is followed again by the refrain with variation:

Where then is wisdom?

Wisdom is established and known to God. God has revealed to “man” [᾽ādām] the way to wisdom: the fear of the Lord and departing from evil constitutes wisdom.  “Job’s unswerving adherence to God in the midst of disaster and desolation represents true wisdom and understanding. Thus if we readers/hearers want to know what wisdom looks like, we should look at Job – and, in principle, emulate him.” (p. 265)  The refrains shouldn’t be read as though wisdom is entirely outside the grasp of humans. Rather wisdom is not something obtained through ordinary human means. It is obtained through reliance on God.

Moberly works through a number of different readings of the chapter, and objections that are raised in other venues. First, this chapter is not a summary of the whole book of Job and there is more that can be learned from the speeches and epilogue. However, wisdom as the fear of the Lord is an answer, if not the only answer, to the question posed by the book. Second, it is interesting thing is that both skeptical scholars and some literalist Christians have a rather wooden approach to the text, failing to recognize the genre and sophistication of the  book of Job in general and this poem in particular. Some skeptical scholars argue that the conclusion – wisdom is to fear the Lord and depart from evil – is dull, shallow, simplistic, boring, conventional piety.

Admittedly, piety can be dull and dim. But need it be so? People who bear great hardship with faithful patience and courage are deeply admirable if one has the privilege, usually a humbling privilege, of knowing them. Perhaps to some extent the issue is the age-old problem of how to make goodness appear imaginatively interesting. (p. 277)

In his epilogue Moberly outlines his reasons for choosing the eight passages we have worked through in his book. With respect to Job 28 he notes:

The wisdom that is in focus in Job is not, I argue, the wisdom for getting on well in life generally, such as is articulated in Proverbs. Rather it is the wisdom that arises when a person, like Job, has to walk uncomprehendingly through devastation and darkness. This wisdom, though it has an intellectual component, is primarily a matter of integrity and faithfulness, for Job (unlike the reader) never comes to understand the reason for his affliction. (p. 282)

Moberly’s book is an excellent and thought provoking ramble through key issues in Old Testament theology and the reading of the Hebrew Bible as Christian Scripture. I’ve thoroughly enjoyed readings it (one of my top purchases this year). It was published in 2013 or it would be a top nomination for book of the year.  This final chapter was no exception.

In what sense is wisdom the fear of the Lord? Does this need to be qualified?

Is wisdom as the fear of the Lord merely a banal platitude?

Is Job an illustration of this wisdom, one that we should emulate?

October 27, 2015
A Proposed Model for Egalitarians: An Honest Tension
Next Post

October 28, 2015 NT Wright, Paul and His Interpreters, the Cover
Recent Comments
3 Comments | Leave a Comment
"I've read the book twice (a year apart) and was as shocked by it the ..."
Rick Castillo Faith in the Shadows (Austin Fischer)
"Your objections have nothing to do with human beings having "subjective awareness". Of course, there ..."
Rick Castillo The Five Conundrums of Calvinism
"Thanks John, I referenced your article in my blog. Very well said. God bless!https://photonfarms.blogspo..."
Fred Hayward What are “Vain Repetitions”? (John Frye)
"Remember, with the standard model of God, we're dealing with an early Iron-age warlord who ..."
Kyllein MacKellerann " Leaving (My) Church, by Kelly Edmiston
Browse Our Archives
get the latest from
Evangelical
Sign up for our newsletter
POPULAR AT PATHEOS Evangelical
1