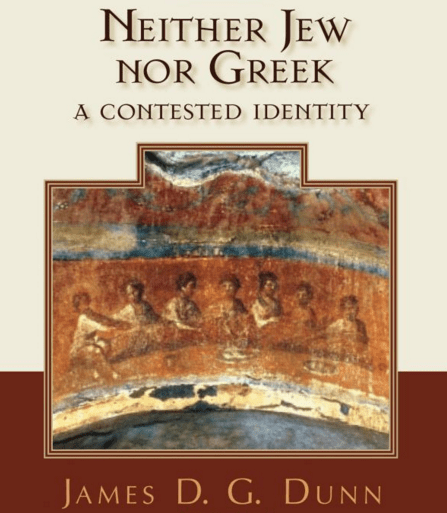 Many of you know my PhD supervisor (Doktorvater) was James D.G. Dunn, and I entered under his teaching in the midst of Jimmy’s famous Christology in the Making, in the introduction to which he mentioned his long term project — Christianity in the Making. Well, it’s done! And a huge congratulations from me and the Jesus Creed blog community to Jimmy for such a colossal accomplishment. Jesus Remembered and then Beginning from Jerusalem and now the big and thesis probing Neither Jew nor Greek: A Contested Identity. The three books — if read consecutively– take you from Jesus into the legacies of Paul, Peter and John.

This is one of the truly great academic accomplishments of the 20-21st Centuries.

I will begin a lengthy series of posts on NJNG beginning today, but it begins with an interview with Jimmy.

How did the fifty sections or units come into existence? Did you have them mapped before the first one began or did they develop as you worked each volume?

On your first question:  I confess that as I began to work on NJNG I wondered whether I might be rounding it off with a §50.   I didn’t aim for that goal and simply followed out the sequence of impacts from the first generation through the next 100+ years.   §§41-44 for the first ‘impact’ made it doubtful whether the rest could be laid out in only 6 more chapters.   But after §§45-46 it soon became evident that I need give only one chapter to each of Paul, Peter and John.   So that, quite naturally, the final summary and reflection would be §50.   Not really very important, but I confess to feeling rather good about it!

What surprised you most as you wrote the three volumes? or at least NJNG

What surprised me most?   Several things, I guess.

One was the character of the Synoptic tradition:  that in the ‘same but different’ formats, the ‘same’ enabled us to gain a very clear picture of Jesus and the impact he made in his ministry, and the ‘different’ allowed us to see how that shared memory was used and reflected on in a limited way, ‘limited’ as compared with John and subsequent Gospels.   It was that sense of the Synoptic tradition as deeply respected and yet freely formulated which gave me a strong sense of the direct continuity between Jesus and the first generation of Christians and the direct continuity between Jesus and the Synoptic tradition.   My objection to so many attempts to explain the Synoptic material is that the focus is far too much on what has been read back into the tradition and too little on the tradition as evidence of the impact and continuing impact of Jesus on his disciples and first generation followers.

I was also fascinated by the fact that so little can really be said about Peter in the post-Easter days – and yet he was regarded so highly (first Pope and all that).   Was he indeed a ‘bridge man’ between the more controversial figures, Paul and James?

And John.   With the freedom he displayed in presenting Jesus, what doors did he open, where does he take us?   Too bad, I’ve been saying locally, now that we worship in our local CofE, that in lectionary terms we work on a three year cycle – one of the Synoptics each year, but never John providing the principal sequence – a sign that he ‘fits’ only awkwardly?

December 4, 2015 The Great Miracle
Recent Comments
0 | Leave a Comment
Browse Our Archives
get the latest from
Evangelical
Sign up for our newsletter
POPULAR AT PATHEOS Evangelical
1