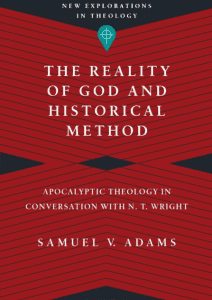 The showdown in Pauline scholarship today is between the new perspective, in particular as articulated in the narratival theology of NT Wright, and apocalyptic theology as articulated by J. Louis Martyn and those who follow him (e.g., M. de Boer, B. Gaventa, D. Campbell). Samuel Adams, in his new book The Reality of God and Historical Method, weighs in at the level of method — historical method vs. theological method. His method is far closer to the theologians Karl Barth and T.F. Torrance than to any historian. His contention is that the historical method of NT Wright cannot get to the theology we need.

Before we get to Adams’ take on apocalyptic theology as he understands it, I must register a methodological failure on his part and then a fear I have of his approach. Here’s how Samuel V. Adams fails NT Wright. Adams’ concern is whether NT Wright’s critical realism method is adequate or sufficient for articulating theology. What Adams does not do is examine where Wright actually does theology: Why not use Wright’s Surprised by Hope or Simply Christian or even his After You Believe? What Adams fails to do is engage Wright where he does theology and instead imputes a theology to him.

My fear? That apocalyptic theology too much looks like a kind of gnosticism. That is, the only way to know God is by knowing what apocalyptic theologians know, and what this means is that one must be born again to know this kind of knowing. (This is the second section’s emphasis of this chp.) That is, soteriology and reconciliation are pre-conditions for knowing. Perhaps I overstate, but I must register this fear of the approach. There is then an emphasis on God’s revelation in Christ and less emphasis on the incarnation as a reality in history — and God trusting us to make sense of that incarnated reality. Is there not at work in a historian like Wright the belief that God can reveal himself in history — pre NT writings in fact — in Jesus and that humans are accountable to make sense of what they see and what they hear.

Adams explains “Apocalyptic, Continuity and Discontinuity: Soteriological Implications for a Theology of History” in chp. 3. Adams:

In its simplest form, the argument of this and the following chapter is that an apocalyptic theology is a truly theological commitment to the reality of God for theology. And this reality affects every discipline related to theology. For hermeneutics, this means that revelation contextualizes us. For epistemology, this means locating theological knowledge in the historical event of Jesus the Messiah, an event that is soteriologically defined and so known only in the actuality of reconciliation. £01 history and anthropology, this means that Jesus’ ongoing historical subjectivity and his enhypostatic union with humanity in his singular human identity is central and determinative. For the individual who would know God, for the human who would be subject, the reality of God is only given as one participates in Christ’s knowledge, his humanity and his history, in and through the Spirit; and this can all be seen and known in terms of the Christian act of baptism2 with its controlling motif of death and resurrection (109).

Thus, on 110 Adams proposes how the Bible is to be read as an instance of “active passivity”:

This means that reading Scripture is a human act determined, not by general hermeneutical theory or rules of reading, but rather by the reality of the God who speaks in and through the Scriptures (110, but this has to be some kind of false dichotomy).

[Again,] :t. The only way of describing this in hermeneutical language is to work backward from Gods self-revelation to an understanding of what reading Scripture entails in the light of the primacy of the act of revelation (112).

When Martyn speaks of Paul’s apocalyptic gospel, he generally means to signal certain interrelated concerns: the gospel is visited upon Paul and his churches essentially unconditionally, by grace and by revelation. All Paul’s reasoning is conditioned in the light of this initial disclosure and hence proceeds “backward” …; the apostle’s epistemology is emphatically retrospective (114).

This is what brushes up against gnosticism somehow: what is known is by grace, only those who know this grace can know what needs to be known; all the others are wrong or left out in the dark. In other words, apocalyptic means revelational (114). Adams asks this question: “… where the gospel finds its contextual home. Does it rely on a prior understanding of a story, a narrative or worldview, of which it makes sense; or does its novelty sweep every story and context off the table and start all over again?” (115). [False dichotomy.] Thus, in spite of what apocalyptic means to historians,

The difference to which the apocalyptic theologians point is that, for them, apocalyptic names a unique event, the revelation of God in Jesus the Messiah, which brings with it its own self-determining context. This does not make sense hermeneutically unless the context is at once the condition, the gift of subjectivity to the knower, upon which the revelation is dependent (115).

[Hear this line then:] Apocalyptic theology denies, on theological grounds, the priority of the contextual axiom of hermeneutics (116).

Adams makes the important claim that this does not relativize history but its recontextualization (117). In fact, on the same page he says Wright himself provides a structure that permits this apocalyptic theology that creates a new reading of the Bible’s narrative, but which cannot be read forwards but only backwards. He offers “a more nuanced (1)-solution-plight (2) structure.” This he thinks Wright does not explore theologically or epistemologically enough. Play for play, now Adams seeks a similar kind of nuance:

Now, we need to be absolutely clear at this point. This does not mean that we somehow know Jesus apart from history, or outside of any cultural or linguistic context, or even worldview. And it does not mean that we must somehow speak of Jesus apart from his historical context—as if it makes sense to call Jesus Christ apart from the history of Israel. What it does mean is that this history is powerless to provide the context for understanding Jesus apart from the positive act of God unveiling himself and providing the condition of reconciled subjectivity to see and to know that unveiling (119). [Which means] Apart from Gods act of self-revelation in Jesus Christ, we cannot know him as he truly is, the God-man, because such knowledge cannot be had on the basis of historical or other forms of finite human knowing (119). [One might ask why that particular formation — God-man — is chosen to be the content of revelatory knowledge.]

There is a stubborn argument here that unless one admits into the epistemological process the content of Jesus as He Who makes sense of the whole, one cannot do history properly, while this stubborn commitment also means that that content cannot be known through the normal processes of reasoning (history in particular). It’s a very strong either-or with big red flags being thrown up. My reading of NT Wright’s four volume work has been that there is an already existing narrative that is already revelatory and that contains revelatory events that are continuous with the story of Jesus Christ (Jesus, Paul, Peter, John, et al) but that that already existing narrative experiences a powerful newness (a revelation, an apocalypse, an irruption, a discontinuity) in Jesus Christ by virtue of the resurrection and that new creation narrative leads the historian to see what was in the previous narrative all along but not seen well enough. In other words, there is for Wright an apocalyptic dimension that does not force the either-or one sees in Adams’ apocalyptic theology. Adams’ method, so it seems to me, poses a discontinuity with the existing narrative that renders the content of the new revelation de-historicized and dis-incarnated.