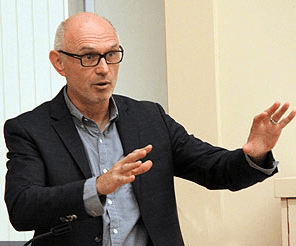 There is a debate now about the Wheaton professor who quoted Pope Francis that Christians and Muslims worship the “same” God. The issue here is in part Christian theology and in part the meaning of “same.” I return to a series of posts I did on Miroslav Volf’s book Allah and I want to bring back some of that 11-part series today. Here is how Volf understands “same” (not the same as “identical” but “sufficiently similar” to build a consensus of values and ethics). I would contend that while all three faiths are monotheistic, there are dramatic — religion-splitting — differences on Who God is and How God is understood.

Miroslav Volf, Professor at Yale, on the dedication page of his new book — Allah: A Christian Response, says this:

To my father, a Pentecostal minister who admired Muslims, and taught me as a boy that they worship the same God as we do.

Volf’s opening to the book is the famous Regensburg University speech of Pope Benedict XVI in which he set the Christian God over against the Muslim God, the former the God of Reason and the latter the God of Will. The speech caused an uproar.

Before we go further I want to quote Volf’s major claim: “Commitment to the properly understood love of God and neighbors makes deeply religious persons, because they are deeply religious, into dedicated social pluralists” [he means everyone becomes neighbors](32).

Do you agree? Does our commitment to love God and neighbor make us even more committed to the neighbor who is unlike us?

This was followed by three responses, two from Muslims and one from a conglomerate of Christians and Muslims. The first response by Muslims was called The Open Letter (focusing on the non-coercion in religion according to the Qu’ran, and that Allah is not capricious, and love of God/neighbor was central to this), and this was followed by The Common Between Us and You — both directed at the Pope — and then Volf was part of a group that drafted the Yale Response. [In my edition of Volf’s book these documents are unfortunately not published.]

The issues that arose can be reduced to some simple ideas:

1. These folks believe Christians and Muslims believe in the same God but understand that God differently. No one disputes the profound differences between Christian Trinitarian beliefs and the Allah of Islam.

2. These folks believe the center of the Muslim and Christian faiths are love of God and love of neighbor. We can quibble — and I certainly would — over “center” here and I can’t speak whether or not love of God and love of others is fundamental to Islam. But the point, so it seems to me, remains profoundly valuable: Muslims and Christians can work for peaceful coexistence by learning to love one another. Volf believes this would be ramped up in degree if it is true — which he believes is true — that the two actually do believe in the same God.

3. The principal actors here are Pope Benedict and Prince Ghazi bin Muhammad bin Talal. Eventually they came to resolution between themselves over the Pope’s earlier statements.

Volf wants to know if the “object” is the same: Do Christians and Muslims actually believe in and love the same God?

He believes too that if the two are not worshiping the same God the whole “Common Word” project crumbles to the ground. Maybe so, but I suspect there are other ways to work together for peace.

I’d like to register here some of my thoughts:

1. I’m not yet convinced of the Same God theory, but I am convinced that the follower of Jesus, the Christian, is to love God and to love the neighbor as himself. We are both monotheistic religions but that’s not enough for me…

2. This means whether Muslims agree or not, and I’m encouraged by those who have participated in these concerns, I am called to love Muslims as my neighbor.

3. But I want to press followers of Jesus to see this in a bigger idea: we are called to love our enemy. This is found in Matthew 5:43-48. The “enemy” there was not necessarily a person’s personal enemy, but probably Rome and its representatives in the Land. Jesus told his followers to love them because God, too, showered his love on them as evidenced in natural blessings.

4. Matthew 13 has a parable called the Parable of the Wheat and Weeds, and the best reading of this parable is about peaceful coexistence (not of a mixture of saints and sinners in the Church). Jesus urges his followers not to seek to rip up weeds now but to wait for God’s judgment — but to live peacefully with weeds in the here and now.

Hence, Volf’s overall conclusion is what I think Jesus calls us to do: we are called to love Muslims and to work together for peace, and we do this best by loving our enemies as our neighbors. All become neighbors in the vision of Jesus.

Volf examines both with clarity and detail three basic options in the history of the church. He begins with Pope Pius II (Aeneas Silvius Piccolimini; 1406-1454), and we have been to his Renaissance home in Tuscany in Pienza. One of my favorite places in all of Italy.

Pius II’s approach was the Crusades. He saw the threat of the Turks in Constantinople (and saw it fall to them in 1453) to classical learning and to the church and his approach, along with some letter writing, was to mount a crusade. That crusade never occurred, and it was the last attempt at a crusade …

But some today think the way to deal with Islam and the mounting problems of the Muslims is to find a new kind of crusade.

In contrast to Pius II Volf examines Nicholas of Cusa, a brilliant theologian whose solution was a “conference” — what today call dialogue.Volf examines two of Nicholas of Cusa’s writings: On the Harmonious Peace of Religions and A Sifting of the Koran. He pushed for a mutual search for the truth without compromising his own Christian faith; he believed whether people or not know it they are worshiping the same God — the one and only true God; he also believed the problem was error that rests on ignorance not the willful rejection of truth. So that he sees in another’s flawed the faith a distortion of the Christian faith. So Nicholas studied the Koran and sought to explain it as a searching for the truth of what is found in Christ.

Nicholas did not seek for compromise between the faiths, or a watering down of the Christian faith. He preferred charitable interpretations of the other’s faith and he opposed turning Muslims into his enemies. We need to admit that God’s immensity means no one grasps God completely and we don’t need to agree on everything to say we worship the same God. So Volf’s summary.

The third person he examines is Martin Luther. Luther’s approach, no surprise here, was to magnify the difference between Muslims and Christianity by emphasizing the total focus on God’s gracious love for Christians and an ongoing commitment to works and deeds for Muslims (whom he praised in their deeds).

But what surprised me about Luther was the leitmotif of Volf’s concern: Luther believed Muslims believe in and worship the one, true God though they have distorted that God. All religions have some share in the proper knowledge of God. Here’s Volf’s summary of Luther: “Muslims believe in the one true God; they just understand God mistakenly.”

Appealing here to John 4:22, Luther saw the paradigm: they worship what they don’t know; we worship what we do know. But “they” are worshiping the same God.

He chastises Luther for believing in an unconditionally loving God and not showing that to Muslims and how he talked about others — he calls him an equal opportunity name-caller. So Luther used negative stereotypes, refused to assign the positive in the clear overlaps in understanding God, and continued to call Muslims objects of God’s wrath.

Volf’s contention gets technical, arguing that “same” does not mean “identical.” Instead, what Volf argues that what is needed is that they are “sufficiently similar.” Clearly affirming that the Gospel of John equates God with Jesus and knowing God through knowing Jesus, Volf observes that those who rejected Jesus — Jesus’ Jewish opponents — still were considered as people who were connected to the one true God (John 5:18; 8:39-58). Volf is illustrating what he means by “sufficiently similar” to be called the “same” God.

Therefore, Volf concludes, the God of the two is sufficiently similar. “Whoever agrees on these four convictions about God refers to the same ‘object’ when talking about God” (101).

But “belief” is not “worship,” and so Volf carefully spells out the meaning of “worship”: and here he departs from the populist mode of thinking, which sees worship as raising hands in a “worship” service and expands the word to its biblical proportions: it is how we live. What we worship and how we worship tell us who our God is. I totally agree with him here: our worship reveals our God.

He argues this can be reduced, as I do in my own work, to loving God and loving others. He appeals to Deuteronomy 6:5 and to Al Zimar 39:45, which only says “God, One and Only” and from this he sees a basic total devotion to God. And then clearly the Bible and Qu’ran are the same on loving others: Matthew 7:12 (Golden Rule) andThe Hadith: “None of you has faith until you love for your neighbor what you love for yourself.” If love is central, the God of that worship is a God of love: worship reveals the character of the God we worship.

He shows the Ten Commandments are essentially parallel.

“When Christians and Muslims agree on the above six claims about God, then in their worship of God they refer to the same object” (110-111).

I have said this before and will say it again: we can agree to some degree at a generic level, but we don’t worship God in the generic. We worship either the God of Abraham and Moses, the God of our Lord Jesus Christ, or the God of Mohammed. The God in each of the faiths is understood differently enough to conclude that saying we worship the “same” God muddies the water.

E.g.,. we could say these things that show they three are sufficiently dissimilar:

1. There is only one God and he has taken on human form in one person, Jesus Christ.

2. The one God has revealed himself most completely in Jesus Christ, who was crucified and raised, so that cruciformity is central to Who God is.
3. The one God is revealed in Three Persons, Father, Son and Spirit.

Neither Judaism nor Islam embraces any of these, so there is good reason to say they are not the same.