A Theology of Creation (RJS) 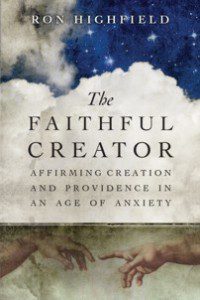 I recently picked up a new book by Ron Highfield The Faithful Creator: Affirming Creation and Providence in an Age of Anxiety. This book explores the concepts of creation, providence and evil and looks like it should lead to some interesting conversation and insight. Ron Highfield is a professor of religion at Pepperdine University (a place I’d love to visit some day), where he teaches courses like Systematic Theology I and Systematic Theology II, among others. Highfield’s approach is that of a theologian, not that of a biblical scholar. His book is described as “both accessible and scholarly” and “an ideal text for classroom use.” This may scare a few off (who really wants to read a textbook?) but shouldn’t. The concepts he addresses are important.  Terry Tiessen (Providence Theological Seminary) notes in his blurb on the back of the book:

[Highfield] cogently reaffirms classical theism, and he applies it very helpfully in our present context. Whether or not readers agree with Highfield’s criticism of recent departures from the classical tradition, they will benefit, as I have done, from interacting with his superb restatement of the tradition and his own constructive appropriation of it.

Classical theism, as Highfield describes it, explicitly includes perfect providence and rejects such options as open theism that deny God’s perfect foreknowledge. Part Two of The Faithful Creator deals with the issue of Divine Providence; Part Three turns to The Challenge of Evil.  But before tackling these topics Highfield first considers the theology of Creation, looking at the Old and New Testaments, the centrality of Christ, the mechanism of creation and the relationship between divine creation and modern science.  There is much here we can chew on.

For a biblical assertion about creation to qualify as theological it must speak about God as Creator or God’s relationship to the creature. Statements in which the Bible speaks of creatures in ways subject to empirical observation or introspection must be excluded from the theological category.  (p. 35)

For example, the statement concerning the ostrich in Job 39 concluding “God did not endow her with wisdom” is observational and provides a moral lesson, but it is not theological because it draws a moral lesson from observation. It doesn’t focus on God and isn’t intended to teach us about God or even about Ostriches.

Highfield puts forth five theses concerning the theology of creation (pp. 36-39).  Because these are theological statements they all concern the nature of God or the relationship between God and his creation.

Do these theses capture the Old Testament theology of Creation?

Is there anything you would modify or add? If so, why?

December 17, 2015 How about this for a strategy?
Recent Comments
2 Comments | Leave a Comment
Browse Our Archives
Related posts from Jesus Creed