Why the Church Should Weep 2: Anger into Love 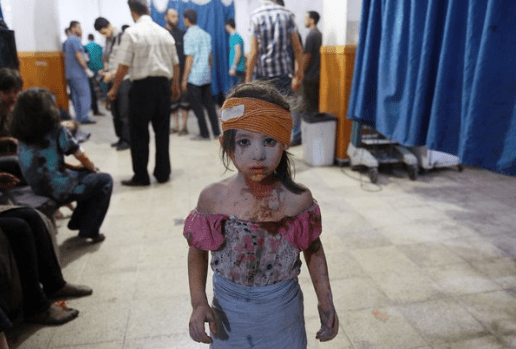 I do not know her real name.  I call her Sadie, because Sadie is my daughter’s name.  Sadie is from Douma, Syria.  This photo appeared on the front page of the New York Times on September 16, 2015.  The times story told of the horrors of civil warfare for most of citizens who were not fighting at all (there are as many as 11 major factions fighting in the region… who’s side would you even be on?).

Caught in the middle, injured from a nearby explosion that day, is Sadie.

Sadie’s picture sent me into an existential crisis of sorts.  5 months later, her image covered in the ashes of senseless violence, a tear streaming from her eye mourning the brutality of wicked men, and blood stains on her war-torn clothes,  still haunts my dreams.  I have not slept well in at least as many months.

I am furious about war.  God did not make his world for this.  Yet political leaders on both sides cannot image responses other than violent ones.

I am furious about the dehumanization of little girls like Sadie.  Do insurgents and soldiers not care?  Have they lost their humanity?

I am furious about the Wests inability to effectively intervene on Sadie’s behalf.

I am furious that Christians think this is about religion, and not about Sadie.

I am furious at my own violent heart and hatefulness toward those I disagree with.

I am furious at my own lack of compassion for my suffering neighbors.

Everyone gets furious.  My contention in this post is that when Christians get angry we pray.  And when angry Christians pray their anger, God transforms it into acts of righteousness.

So I have these two friends.  Ryan and Jolene Smith.  On the Wednesday that Sadie’s picture was published in the times, I posted it to my Facebook wall.  Ryan saw it.  He came home and told his wife Jolene about the picture.  5 months later, they have 4 new additions to their home as foster parents to kids who were homeless when they opened their home.

Here is why I tell that story.

We live in what Charles Taylor calls the Secular Age, an age where belief is nothing more than a ghost that haunts us from the past.  And when our secular age hears of Christians “praying for the migrants in Syria”  the general response is “Stop praying.  Do something.”  That is interesting to me for two reasons:

And here is what haunts me.  This is the thing that keeps my faith alive in darker moments.  When I see Christians bare their souls in lament like this, their eyes change.  They begin to see things they didn’t care to notice before.  And it isn’t something they choose to see.  It is almost as if someone else sees it for them.

Ryan Smith came home and told his wife about Sadie’s picture in the Times and said, “I think we have to do something.”  His wife, Jolene,  responds with, “Well, it is funny you should mention that.  I have been getting calls from the foster agency today about 4 siblings without a home.”

So there is this scene in the gospels where Jesus fashions a whip and spends a couple of hours in the Temple turning over tables and driving out money changers.

The religion of his Father is being turned into a money making scheme that takes advantage of the poor.

And when he finishes his tirade, he announces to the congregation of the astonished onlookers:  “My Father’s house is a house of prayer for all nations, and you have made it into a den of thieves.”

A House of Prayer for all nations…

We get furious over lack of action.  But it turns out that not just any action will do.  We need prayerful action.  If we are angry we ought to bring it to God for divine investigation.  What if God gives us new eyes?

Remember Saul of Tarsus?  A guy who went around murdering Christians in the public square.  A man who demanded the blood of Jesus followers to flow in the gutters.  Jesus meets him on the road to Damascus and strikes him blind.  Jesus then appears to a man named Ananias and tells him to go to Saul, “for he is praying…”

I never noticed this line before.  A violent man struck blind by the love of Christ.  What can we do when we are blinded by our violent and vengeful hearts?  I believe we are invited by the living God to lament, to cry out, to give our hatred to God in prayer.

So long as we realize the God we give it to is the God who said, “Father forgive them…”  So long as we understand that we might end up like the once murderous Saul of Tarsus, saying things like, “When your enemy is thirsty, give them something to drink.”

On Wednesday September 16, 2015, I wanted to find a way to kill people responsible for little Sadie’s horror.   After praying about it, and after some trials that plunged my wife and I into prayer, I think God has us aimed at adopting instead.