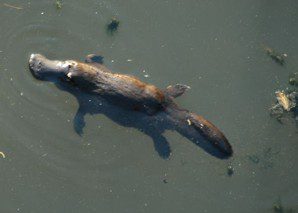 One of the most common complaints about evolutionary biology is the absence of transitional fossils – the so-called missing links. This generally represents a significant misunderstanding of the nature of evolutionary change and a misunderstanding of the available evidence. We classify animals based on the current range of differences observed. Mammals are not reptiles, and there is no half mammal half reptile species alive today. There can’t be, because if such a creature existed, it would help define the forms and classifications we use. For example, mammals are not defined by live birth of young because the platypus, with many other common mammalian features, is an egg laying animal. Like other mammals, the platypus and other monotremes are warm-blooded, hairy, milk producers, with a single bone dentary bone in their lower jaw, and three middle-ear bones. The vast array of features and traits observed in the diversity of lifeforms today present a fascinating puzzle for systematic biology. It is possible to classify and organize, but it is not always easy to define kinds. It appears that life is now, and has always been, in transition.

Despite the claims of some opponents of evolution, the fossil record provides many clear examples of transitional forms. In chapters 5 and 6 of his book Evolution and Belief, Robert Asher runs through some details of this evidence, first for mammals in general and then for the family including elephants in particular (mammalian paleontology is Dr. Asher’s specialty). Although we tend to define mammals as warm-blooded animals that nurse their young, a more traditional scientific definition involves the structure of the jaw and ear. Soft tissue features such as mammary glands and fur are only indirectly preserved in the fossil record. Bones, on the other hand, are plentiful. 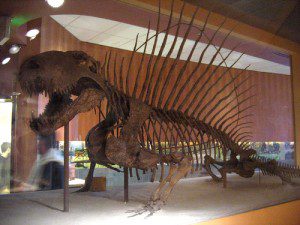 The branch of tetrapods through which mammals developed separated from branch leading to dinosaurs, reptiles and bird something like 312 million years ago, very quickly after amniotes capable of laying eggs on land appeared on the scene. Mammals are synapsids – defined by a specific skull feature. Dinosaurs, reptiles and birds are sauropsids. The Dimetrodon (295-272 million years ago (mya) – skeleton to the right) is a synapsid, not a dinosaur or a mammal, but a branch of the group that led from the earliest amniotes to modern mammals. 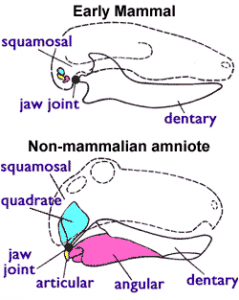 Mammals are distinguished from other synapsids by the development of a dentary–squamosal jaw joint. Non-mammalian amniotes, both synapsids and sauropsids, possess four jaw bones and a complex joint (image from Wikipedia). Mammals posses a simpler joint and one dentary jaw bone. The other three bones form part of the ear. Fossil skulls provide a clear record of the gradual development of the mammalian jaw and ear structures. Asher runs through this evidence in chapter 5. The fossil record illustrates a gradual adaptation of existing structures from one purpose (eating) to another (hearing) over something like 100 million years. The first clear “mammal” appears in the fossil record some 200 mya.

Embryology provides a confirming line of evidence. The four jaw bones of reptiles form from the same location in the early embryo as the ear and dentary bone of mammals, with additional similarities in the nerve connections to the active muscles. One key aspect of the modifications from jaw to ear involves a difference in timing gene expression in embryological development. This isn’t the creation of something from nothing, but a re-purposing of already existing components, combined with some reshaping.

Broadly speaking, Darwin’s theory leads to the understanding that variations during growth, including subtle changes in the timing of development from one generation to the next, forms the basis upon which natural selection can operate. Note how greatly this differs from the false characterization that evolution must “create information” from scratch. A major anatomical novelty, such as the incorporation of small bones into the hearing mechanism of mammals, does indeed seem to present an unbridgeable gap when we ignore development and fossils an compare the hearing mechanisms of modern, adult reptiles and mammals. However, both groups show sufficient anatomical variation during their development so as to make the differences between them derivable from differences in the growth and timing of certain parts of the skeleton. Combined with data from the fossil record, we can connect the processes of development evident to us in the lifetime of any living mammal or reptile with the adult appearance of real animals that existed in the past. (p. 106)

The development of an embryo doesn’t retrace an evolutionary path – but differentiation results from subtle differences in the way in which existing genes are expressed as the embryo develops and this can make it appear as though the past is retraced. In fact … “you yourself had a jaw articulation like that of a crocodile … at an early stage of your development.” (p. 106)  The timing of ossification (turning cartilage to bone) makes a big difference.

[O]ne could say that the decrease in size in synapsid postdentary bones was, at least initially, a side effect of the selection for increased power during jaw closure via enlargement of the dentary bone. Only later during synapsid evolution did acoustic sensitivity comprise a major selective force driving the evolution of what would become our very distinctive mammalian ear bones. (p. 107)

There is a great deal more of interest in this chapter (including a discussion of the appearance of evidence for lactation), but I would like to wrap up this post by turning to Asher’s discussion of elephants in chapter 6. 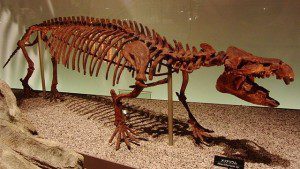 The History of Elephants. The earliest distinct ancestor of the modern elephant is found in a fossil species Phosphatherium existing about 55 mya. This animal possessed an anteriorly (near the front) situated eye orbit similar to the modern elephant. How do we know that this is ancestral to elephants (i.e. Order Proboscidea)?

In the case of the Proboscidea, it is not only because we see certain key anatomical features shared by modern elephants and Phosphatherium (Figure 6.1), but also due to the fact that we have a long string of fossils that show aspects of their bones and teeth intermediate between those of ancient and modern proboscideans. These intermediates document with some precision how features that we know today in elephants have appeared mosaically, or piecemeal, in many extinct animals over the past 60 million years, including fossils of Phosphatherium (Figure 6.2). (p. 113-114)

Other species are found between Phosphatherium and the recognizable elephant-like species. The image above is of a Moeritherium dating 37-35 mya (image from Wikipedia). I haven’t reproduced the figures Asher refers to in the quote, but like the figures of mammalian jaw development in chapter 5, these help to illustrate the evidence for the evolutionary progression to the modern elephant. The figure below outlines the more recent progression, along with some pictures of mastodon, stegodon, and mammoth fossils. (Except the mastodon, all images adapted from available images on Wikipedia.)

The teeth are particularly interesting. Although the mastodon survived until something like 11000 years ago, its lineage traces back 20 million years. It changed relatively little over this time. Other Proboscidea exhibit more diversity. One key difference between the Mastodon and the stegodon, elephants and mammoth is seen in the teeth. The teeth of stegodons and mammoths, like modern elephants, are composed of plate-like lamellae.  The mastodon teeth are quite different with sharp points on the molars. 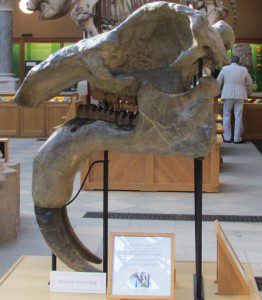 Elephant like animals are amazingly diverse. The deinotherium, skull shown to the right, had lower tusks, and was larger than modern elephants.The teeth are mastodon like. Although it appears in the fossil record about the same time as the mastodon, it most likely derives from a branch that separated much earlier (>35 mya).

Asher points out that the fossil record of Proboscidea and their precursors supports two key predictions of evolutionary biology: “the features we observe in modern elephants occur in varying combinations in many kinds of extinct mammals”  and “fossils that most closely resemble modern forms are, by and large, younger.” (p. 118)  The progression isn’t perfect (he uses deinotherium as an example). And similar features can arise along different pathways (numidotherium is an example here). Another complication arises from the fact that “it is only once a new species becomes sufficiently widespread and numerous that it is likely to appear in the fossil record, and such conditions may occur much later than the actual speciation event.”  (p. 120)  Thus small deviations are not troubling. It is also always possible that a new find of a rare fossil will push the timing of some of the branches on this tree back in time somewhat. But the overall picture is clear, and transitional fossils are abundant. Elephant-like fossils are not rare at all.

That these transitions took millions of years, following a wandering path to the modern reptiles, mammals and elephants that surround us is, by far, the most consistent explanation. And this flowering of forms, like all of creation, declares the glory of God.  It leaves me in awe of the marvels of creation.

Does the abundance of evidence for the evolutionary history of mammals surprise you?

Does it change your understanding of evolutionary biology?

Is it a challenge to faith?

February 23, 2016 Trump, Pope Francis, Roger Olson: Is Trump a Christian?
Recent Comments
8 Comments | Leave a Comment
"WOW UR TESTIMONY JUST SAVED ME. WOW. Thank you praise Jesus. (I feel like that ..."
Luu Saturday Afternoon Book Review: Andrew Farley
"Avoidance of these verses is at the heart of faulty conclusions. Humanistic interpretations are why ..."
Glenn Harrell What To Say When Someone Says ..."
"I think what you should say is: "I don't want to kink shame, but that's ..."
Spirit Plumber What To Say When Someone Says ..."
"Jesus dying temporarily for our sins doesn't really make much sense. Here's why:Let's say I ..."
C Nault What is a “Sacrifice of Atonement”?
Browse Our Archives
get the latest from
Evangelical
Sign up for our newsletter
POPULAR AT PATHEOS Evangelical
1