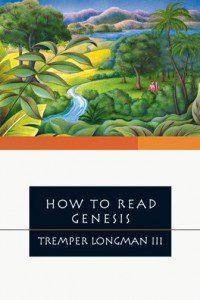 I’ve begun a new series looking at the book of Genesis. This series will be shaped around the new commentary by Tremper Longman III on Genesis in the Story of God Series, but will also use his short book How to Read Genesis (HRG) along with the commentaries by John Walton (The NIV Application Commentary Genesis) and Bill Arnold (Genesis (New Cambridge Bible Commentary)).

The book of Genesis (and indeed the entire Pentateuch) is anonymous. There is nothing in the book itself that identifies the author(s) or editor(s).  The book has been traditionally assigned to Moses. The primary (more accurately … the only) reason for this is the place of the book in the Pentateuch.  Longman is content with a connection to Moses, but points out that this doesn’t mean what many take it to mean.

First, there are clear parts of the book (and the rest of the Pentateuch) that were inserted well after the time of Moses. One commonly noted example is the reference to “Ur of the Chaldeans” in Gen. 11:28, 31; 15:7.

No one doubts the antiquity of Ur. It was an ancient city, founded long before Moses and Abraham before him. It is the qualifier, “of the Chaldeans,” that is universally recognized as coming after Moses. The Chaldeans were a first millenium-B.C. Aramaic speaking tribe that came to dominate southern Mesopotamia (now southern Iraq) including the area of Ur.  … The reference to the Chaldeans helped a first-millenium readership understand which particular city their ancestor came from. (p. 45 HRG)

Another example is found in 14 where Abram pursues those who captured Lot to the city of Dan. However, the city was not given this name after one of the tribes of Israel until much later (Judges 17-18).

The final canonical form of the book of Genesis contains post-Mosaic activity.

Second, who ever wrote the book used earlier oral and written sources to shape the book. “Or, more accurately, parts of the book are treated as sources that are woven into the main fabric of the book.” (p. 46 HRG) This is true whether Moses was involved or not, and whether this involvement was in writing one of the sources used at a later time, or shaping the majority of the text as we currently have it.

The use of sources doesn’t mean a contradictory and careless weaving together of material. Rather the book is shaped as a literary whole for a distinct theological purpose.  Longman is clear about this in both HRG and in his full commentary.

Third, the documentary hypothesis has a number of technical and philosophical flaws.  This doesn’t mean that there are not different sources and editors, but that these sources and editors cannot be traced as cleanly as the “scientific” view of JEDP suggests. Doublets (repeated very similar stories such as a patriarch passing off his wife as his sister) can have a literary purpose in the uniform whole of the book. There is no clear reason to suppose that they are indiscriminately patched together from disparate sources. Using different words for similar ideas (like God) is also not a clear indication of disparate sources. A literary work will often – then as today – use different words to shape the work. Finally, theories that invoke a distinction between the “logical” modern mind contrasted with the ancient (Semitic) mind or that look for a clean evolution of religion from animism to monotheism are particularly strained.

The text of the Pentateuch clearly attributes much writing, particularly of the law, to Moses. As a Christian there is no good reason to doubt this attribution. This is a foundational story about the work of God in shaping his people. We could discuss how much of Exodus, Leviticus, Numbers, and Deuteronomy in their final forms should be attributed directly to Moses and how much represents the teachings of Moses and writings of Moses woven into a story about Moses and the formation of the Israelite nation in the exodus from Egypt.  But this is a minor point.

Genesis is different. Nothing in Genesis suggests a Mosaic origin. In How to Read Genesis Longman argues that Genesis, as an integral part of the Pentateuch, should also be attributed largely to Moses. I am unconvinced by this argument. From the rest of the Pentateuch it is clear that Moses and the Israelites were familiar with their founding story in Canaan and through the patriarchs. Moses could have recorded this or it could simply have been part of their history remaining in the form of oral and written sources unconnected with Moses. On any account, in contrast to the story of the patriarchs in Genesis 12-50, there does not seem to be any reference to Genesis 1-11 in the other four books of the Pentateuch. (If there is one we should consider, please note it in a comment.) There is little to date the assembly of this material.

But when it comes down to it, it is both impossible and unnecessary to differentiate Mosaic and non-Mosaic material in any detail. It is impossible because the text isn’t interested in signaling to the reader in every case who might be responsible for what. It is unnecessary because in the final analysis the authority of the text is not located in Moses but in God himself. Moses’ words aren’t canonical; the finished product, the book as it was written when the Old Testament canon came to a close, is. Much of the process that led to its completion and also its canonization is lost to us today. By the time the history of interpretation becomes available to us, the book has assumed its present form. We now join that history by commenting on the finished book of Genesis within the context provided by the Pentateuch and ultimately the whole biblical canon. (p. 56-57 HRG).

In his full commentary, Longman appears to attach less significance to any Mosaic authorship of Genesis but has exactly the same ultimate conclusions. It doesn’t really matter, because it is the final canonical form of the book we approach as the inspired word of God. The final form may not have been reached until after the Babylonian exile. (Personally I think the evidence is very strong for a completion of Genesis in the exilic and post-exilic era.) This does not undermine the importance of the book in the canon or in the Pentateuch. And it does not mean that it was constructed out of the air (i.e. fabricated) at that time. That older written and oral sources were used seems completely uncontroversial and entirely probable – both “academically” and through the eyes of faith.

The only reason to care about dating sources in the book of Genesis is to identify the appropriate cultural context to assist in interpretation, to understand the intended meaning of the text. This might, at times, be different if the original context was Mosaic/Egyptian or Exilic/Babylonian. This is particularly true in the primeval history of Genesis 1-11, but largely unimportant in the remainder of the book.

Is the human authorship of Genesis important? If so, why?

Does a long editorial history undermine its authority and truthfulness?

Does Longman’s claim that the authority of the text rests in the final canonical form make sense?

March 3, 2016
A Wrath-less God Has Victims (by Jason Micheli)
Next Post