Paul and the Christian Life: Which Paul? 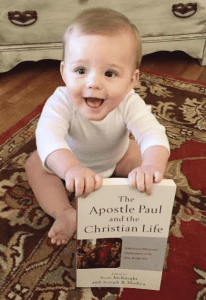 One’s view of Paul (or Paul’s theology) shapes one’s orientation to how Paul understood the Christian life. In the simplest of categories, there are three orientations to Paul’s theology: the old perspective, represented by Lutheran and Reformed theologians like Stephen Westerholm, Tim Keller and John Piper; the new perspective, represented by E.P. Sanders, James D.G. Dunn, and N.T. Wright; and the apocalyptic Paul, represented in some ways by theologians like Karl Barth or T.F. and  J.B. Torrance as well as by NT scholars like J. Louis Martyn and Douglas Campbell.

Each orients the Christian life in special ways and begins in particular places — they all begin, to be sure, with the NT at some level but it’s not the simple — and those ways and places result in different orientations. The old perspective orients the Christian life in personal soteriology and it results in an individualistic presentation of the ordo salutis. (A good example is a classic by John Murray, Redemption Accomplished and Applied.) The new perspective will be discussed below and in this series I am beginning today. The apocalyptic draws together great themes in the old perspective, turns them into cosmically-adjusted significance with upper case letters — Grace, Sin, Flesh, Redemption, and also focuses on cosmic themes: New Creation, Justice, and Peace.

This needs to be said: the spiritual formation movement, especially as found among Western evangelicals, is largely an old perspective theory of Paul and the Christian life. An exception is to be granted for those in the spiritual formation movement who focus on “discipleship” or “following Jesus.” But by and large it is about personal growth in holiness (and sometimes, but not always, love) and rarely is there an emphasis on church life. (Check out the major books in the movement. An exception who gets it balanced well is James Bryan Smith in his 3 volume set from IVP.)

These major orientations are on a spectrum; they cannot be reified into perspective-only themes. But I would contend there are orientations that differ in emphasis. Thus, I hear far more about cosmic redemption in the apocalyptic than I hear in the old perspective, and less about church in the old and apocalyptic as I hear in the church (though again it’s not that simple). I hear differing implications in Bev Gaventa and Doug Campbell than I hear in NT Wright and Jimmy Dunn than I hear in Stephen Westerholm. Again, this is a spectrum: one can hear notes of each in the other. And there are distinctive voices that seem to mix the orientations in a more balanced way, as one can see in Michael Gorman and John Barclay.

Dunn opens our volume — and claims two words clarify what Paul thinks of the Christian life in Galatians: faith and Spirit, faith in Christ and life in the Spirit. The entire letter of Galatians is shaped by Paul’s theology that one needs to believe (or have faith) in Jesus and faith alone justifies the Gentile alongside the Jew. Paul’s own conversion story illustrates the adequacy and sufficiency of faith in Christ.

Famously, Dunn sees in “works of the law” not acts done to earn favor with God (as is the case most of the time in the old perspective, and classically so) but instead boundary marking acts like circumcision, food laws, and sabbath practices. Acceptance with God is determined solely by faith, not by boundary marking actions that separated Jew from Gentile. [At this point notice the ecclesial emphasis already: God is forming a new community and acceptance is not ethnically determined but faith determined.]

Furthermore, any emphasis on faith that does not simultaneously emphasize life in the Spirit fails Paul’s own orientation to the Christian life. The Galatians’ experience of the Spirit was important to Paul — whether that was tongues or the gifts of the Spirit. The point is the Spirit is at work transforming and transcending. The Spirit both makes Christians and transforms sinners into Christlikeness.

Notice the centrality of Spirit in Paul’s most heated moment in the letter:

Gal. 5:1 For freedom Christ has set us free. Stand firm, therefore, and do not submit again to a yoke of slavery.

Gal. 5:2   Listen! I, Paul, am telling you that if you let yourselves be circumcised, Christ will be of no benefit to you.  3 Once again I testify to every man who lets himself be circumcised that he is obliged to obey the entire law.  4 You who want to be justified by the law have cut yourselves off from Christ; you have fallen away from grace.  5 For through the Spirit, by faith, we eagerly wait for the hope of righteousness.  6 For in Christ Jesus neither circumcision nor uncircumcision counts for anything; the only thing that counts is faith working through love.

Faith and Spirit — not works of the law and Torah-practices.