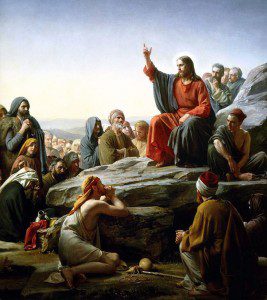 Several weeks ago I started a series of posts looking at the question of biblical womanhood. You can find the earlier posts in the series here (1) Biblical Womanhood … Not What Many Think, (2) Biblical Womanhood … The New Testament (3)  All Authority in Heaven and on Earth and (4) By Their Fruit You Will Know Them. My contention is that our only true authority is God, with all authority given to Jesus. God calls who he will, when he will, to carry out his work. As humans we are brothers and sisters who stand before Christ. Effective Christian leaders will model, or aim to model, Christ’s ethical teaching.  Since the last post there has been an extensive conversation surrounding posts on Ruth Tucker’s new book Black and White Bible, Black and Blue Wife.  Although many commenters argued that male headship – defined as male authority in marriage (I prefer not to use the word complementarian for this view because it is authority and hierarchy not complementarity that is in view) is not responsible for abuse and that this view in the church does not and should not condone abuse, the fact remains that in her story it was used to justify or minimize abuse and provided a backdrop in Christian community that made it harder to leave an abusive marriage. This is true for many women in conservative Christian churches.

It should go without saying that most hierarchical (male headship) marriages are not abusive and that many, as high a percentage as egalitarian marriages (where egalitarian is not used as a counter to complementarity but as a counter to hierarchy), are very good, strong relationships.  Certainly my experience bears this out – the strength of those marriages I know (close friends, relatives, etc.) depends not on the view of male headship vs equal partnership, but on the love, respect and consideration that each partner displays for the other.

As I read and thought about the range of views being expressed on the various posts on Ruth Tucker’s book I was also listening to the Gospel of Matthew. As I’ve mentioned before I spend most of my commutes listening to streaming audio from Bible Gateway on the app on my phone. Currently I am listening to Eugene Peterson’s paraphrase The Message as read by Kelly Ryan Dolan. Several passages seem relevant here.

At about the same time, the disciples came to Jesus asking, “Who gets the highest rank in God’s kingdom?”

For an answer Jesus called over a child, whom he stood in the middle of the room, and said, “I’m telling you, once and for all, that unless you return to square one and start over like children, you’re not even going to get a look at the kingdom, let alone get in. Whoever becomes simple and elemental again, like this child, will rank high in God’s kingdom. What’s more, when you receive the childlike on my account, it’s the same as receiving me.

Jesus wasn’t telling his disciples to become (or behave) like toddlers or young children. The question that sets up this passage gives us the intent. Jesus was, once again, driving home a point about the kingdom of God (on earth as in heaven). The kingdom of God turns our this-worldly ideas of power and authority and position and pride over on their head. This has important consequences for a Christian view of leadership. Leadership (home, church, or anywhere) isn’t about power, authority and privilege. It is about service and love and sacrifice and responsibility.  If a position of leadership brings up feelings of pride, arrogance, and entitlement, something is wrong. This is true in general, but especially in home and church.

Jesus is about as harsh as he can be when it comes to consequences for arrogance.

“But if you give them a hard time, bullying or taking advantage of their simple trust, you’ll soon wish you hadn’t. You’d be better off dropped in the middle of the lake with a millstone around your neck. Doom to the world for giving these God-believing children a hard time! Hard times are inevitable, but you don’t have to make it worse—and it’s doomsday to you if you do.

“If your hand or your foot gets in the way of God, chop it off and throw it away. You’re better off maimed or lame and alive than the proud owners of two hands and two feet, godless in a furnace of eternal fire. And if your eye distracts you from God, pull it out and throw it away. You’re better off one-eyed and alive than exercising your twenty-twenty vision from inside the fire of hell.

“Watch that you don’t treat a single one of these childlike believers arrogantly. You realize, don’t you, that their personal angels are constantly in touch with my Father in heaven? (18:1-10)

Peterson uses the term “the great reversal” in a number of other passages. The first will be last and the last will be first. Concern for rank, privilege, authority, etc. are worldly values with no place in the Kingdom of God. 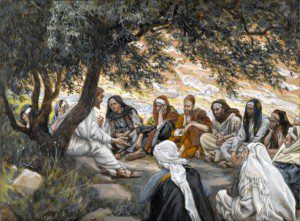 But what about marriage? Not too much further (after a few stories including the rich young man – worth discussion in its own right) Matthew reports the teaching of Jesus on divorce. The Message puts a slightly different twist to the passage than I’ve heard elsewhere.:

One day the Pharisees were badgering him: “Is it legal for a man to divorce his wife for any reason?”

He answered, “Haven’t you read in your Bible that the Creator originally made man and woman for each other, male and female? And because of this, a man leaves father and mother and is firmly bonded to his wife, becoming one flesh—no longer two bodies but one. Because God created this organic union of the two sexes, no one should desecrate his art by cutting them apart.”

They shot back in rebuttal, “If that’s so, why did Moses give instructions for divorce papers and divorce procedures?”

Jesus said, “Moses provided for divorce as a concession to your hard heartedness, but it is not part of God’s original plan. I’m holding you to the original plan, and holding you liable for adultery if you divorce your faithful wife and then marry someone else. I make an exception in cases where the spouse has committed adultery.”

Mark 10:12 makes clear that this is reciprocal, women likewise are not to divorce their husbands for another, but this was less of a problem in a patriarchal culture.

Now the surprising part. It isn’t the Pharisees who respond aghast, but Jesus’s very disciples!  They still haven’t gotten the point.  This is about marriage – but on another level it isn’t. The message is far greater. Marriage is one particularly powerful application of the greater Christian calling to love for others.

Jesus’ disciples objected, “If those are the terms of marriage, we’re stuck. Why get married?”

But Jesus said, “Not everyone is mature enough to live a married life. It requires a certain aptitude and grace. Marriage isn’t for everyone. Some, from birth seemingly, never give marriage a thought. Others never get asked—or accepted. And some decide not to get married for kingdom reasons. But if you’re capable of growing into the largeness of marriage, do it.” (19:3-12)

Marriage, as God intended it, requires the self-giving love and commitment of two people for each other. Men should not take wives for selfish fulfillment, discarding them if it isn’t profitable. More than this – they should love them as their own self. Christian marriage should not be entered into unless one is willing to live a life of self-sacrifice, truly becoming one flesh. We will all fail at some point, but this should always be the goal and ideal.

The great reversal impacts all areas of life. Concern for rank, privilege, authority, etc. are worldly values. They have no place in the Kingdom of God.

What does it mean to have a child-like faith?

Does Peterson’s paraphrase of Jesus’s response to his disciples (if you are capable of growing into the largeness of marriage, do it) make sense?

March 15, 2016 The End of the Dance?
Recent Comments
0 | Leave a Comment
Browse Our Archives
get the latest from
Evangelical
Sign up for our newsletter
POPULAR AT PATHEOS Evangelical
1