Eternal Conscious Torment: The, or One, View? (by John Frye) 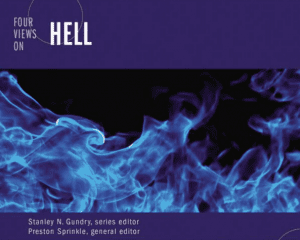 I came into the Christian community as a Junior Higher. Our family began attending a Bible church which was part of small coalition of independent fundamental churches. Not knowing at the time, I was immersed in a rigid, legalistic, dispensationalist version of fundamentalism. Hell was a destiny of fiery pain forever and ever for all who “did not accept Jesus as their Savior.” A vestige of those early roots linger in my soul. This view of hell was taught in the Bible college and seminary I attended. Through the years I noticed that while many fundamentalists and evangelicals do believe in Eternal Conscious Torment (ECT), it wasn’t a doctrine that was part of daily Christian conversations. Hell became a “skeleton in God’s closet” as Joshua Ryan Butler has creatively expressed. I admit that until reviewing this book, Four Views of Hell, I haven’t done much serious theological reflection on this weighty topic.

Burk does engage with the various meanings of Hebrew ‘olām and Greek aiônios (forever) and with competing views of Gehenna. Burk believes that the emotional revulsion that many have to ECT (he cites Stott) tips their hand that they are letting emotions override the clear meaning of the Bible, while admitting that others object to ECT on exegetical and theological grounds (which is made clear in the other three views in the book). As a matter of fact, Jerry L. Walls, who writes for the purgatorial view, thinks Burk has made a solid case for ECT, but disagrees with Burk about the purpose of ECT.

Burk, while eschewing emotionalism, opens with a “parable” about a person pulling the legs off a grasshopper. The point of the unfolding parable is that sin is measured not by the sin itself but by who is sinned against. He writes that it is a “theological principle” that “to sin against an infinitely glorious being is an infinitely heinous offense that is worthy of an infinitely heinous punishment” (20). He repeats this principle often in his essay. It seems reasonable.

John Stackhouse takes issue with this theological principle. “…Burk shows precisely nowhere in the Bible a single passage in which this argument in actually made” (45). Even Walls, who agrees with much of Burk’s view, writes “However, the attempt to deduce ‘infinitely heinous offense that is worthy of an infinitely heinous punishment’ from the notion of infinite glory is rather dubious” (56). Burk presents a deduction from a parable and then reads texts in view of the deduction.

As I read Burk’s analyses of the texts, a red flag went up in my mind, at this: “Though not specifically mentioned in this text [Isaiah 66:22-24], this scene seems to assume that God’s enemies have been given a body fit for unending punishment” (23 emphasis mine). That was a new concept to me. My question was, “Where are the Bible verses for that?” Stackhouse can’t believe God will resurrect “zombies” who are “perpetually living undead.” Will God actually raise to life unrepentant dead people and give them living bodies “fit” so they can consciously experience ECT? Chapter and verse, please. As Stackhouse wonders about the term die, “But what precisely no one can conclude is that God was threatening that ‘in the day you eat of it you shall die—by which I mean, you will actually live forever, if very unpleasantly” (75). “Die” cannot mean “not die.”

Allowing that Burk does not have all the space he needs (in this edition) to write against the three competing views, he doesn’t even admit that the other views have both exegetical and theological foundations. In my opinion, at times Burk seemed to be simply proof-texting his view as if “the Bible says it, I believe it, that settles it.” The other views have been around in the church as long as the ECT view. Robin Parry accepts Burk’s two destinies texts and only wanted to see Burk bring them alongside and reconciled with “the global-salvation, universalism” texts (50).

All the contributors agree that at the core of one’s view of hell is one’s view of God. Reflecting on Burk’s presentation, I think he presents a God in whom judgement triumphs over mercy against the enduring biblical theme that mercy triumphs over judgement. I, at this point, cannot just wish away the ECT DNA in me. I am willing to hold it loosely and tentatively. I think ECT needs a total overhaul in how it is biblically and theologically formulated and presented.

March 18, 2016
Donald Trump: An Eruption of Secularism (by Austin Fischer)
Next Post