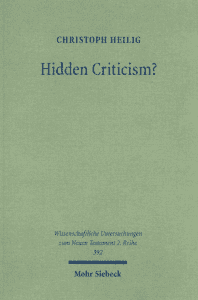 One of the most stimulating developments in NT studies is the arise of scholarship that argues there is a (mostly implicit) subversion of the powers, and those powers are centralized in Rome — and hence many have discovered that the NT is loaded with anti-imperial criticism. Some of us have said the rise of this conclusion parallels the rise of seeing America as an empire, and the rise of the scholarship also paralleled the presidency of George W. Bush. In other words, it was often said that this stuff was current politics imposed on the NT.

Not so fast. Yes, plenty of NT scholars let their political allegiance flags fly high. But this cannot be dismissed by calling it contemporary eisegesis. The question is How can we detect in the letters of Paul anti-empire criticism?

Enter now a very serious methodological study by Christoph Heilig, Hidden Criticism? The Methodology and Plausibility of the Search for a Counter-Imperial Subtext in Paul (WUNT 2.392; Mohr Siebeck, 2015). Hidden Criticism is both an academically demanding read — including a study of Bayes theorem of probability — with expertise in a few areas, including NT studies, Pauline studies, the Greco-Roman context, and scholarship on empire criticism. This is not the location for an extensive examination but I want to make a few points.

First, this is the first methodologically rigorous examination of how to detect “echoes” of empire in Paul’s writings. At times NT scholars have walked somewhere between the adventurous and the reckless and, because the audience will be receptive, made claims that are not worthy of serious consideration. It is noticeable that Heilig doesn’t even consider “image” in “image of God” in Paul’s letters as reflecting images of the emperor. There has been very little methodological discussion of how to detect echoes of empire, so Heilig’s study stands alone at the top of very little else.

Second, the occasional use of Richard Hays’ “echows” as a method for detecting empire is both examined and found in need of very serious improvement. While NT Wright and Neil Elliott have used  — deflected to Hays — in their own empire criticism, Heilig’s contention is that Bayes’ theorem of probability is far more valuable — one that focuses on the explanatory potential and the background plausibility of a hypothesis. One has to show that Paul in that context was aware of empire ideology and that this explanation secures meaning in the specific context.

Third, Heilig is critical of the theory that the apostle Paul used subtext (or innuendo, or hints barely detectable now) because he might suffer persecution. This won’t work for Paul’s personality and there are times when he is both more direct and affirmative — e.g., why claim Roman citizenship if you are against it? He’s with Barclay here.

Fourth, Romans, Jews, and even Christians could express criticism at some levels without much fear of reprisal while some levels — serious criticism of the entire empire or the emperor at a deeper level — would put the critic in jeopardy. At this point Heilig’s book needed another chapter — one that was devoted to empire criticism and criticism of emperor worship in the Jewish world, and so I was surprised he does not examine Anathea Portier-Young’s important book, Apocalypse against Empire.

Fifth, Heilig examines James Scott’s theory of hidden transcripts, describing it adequately and fairly, but he didn’t evaluate it carefully (read: critically) enough. I shall postpone more substance on this until Drew Strait’s dissertation comes into print.

Sixth, I want to cite the major conclusions by Heilig — and he affirms a cautious, methodologically far more rigorous defense of some empire criticism in Paul, a set of conclusions that set up the discussion between Wright and Barclay:

Paul’s use of the subtext for expressing counter-imperial criticism could be explained in two ways. First, one could postulate that it was not Paul’s primary intention to criticise the Empire so that more overt criticism would have detracted from his main focus (Chapter 5, Section 2.2.1). Second, one could maintain that Paul was explicitly engaging Roman ideas but that more open criticism would not have been more effective (Chapter 5, Section 2.2.2). So the first specification of the subtext-hypothesis modifies the notion of criticism, whereas the second attempt to make the subtext-hypothesis plausible focuses on Paul’s rationale for choosing the subtext for his criticism. …

Much of Paul’s christological discourse, such as Phil 2:6-11, comes to mind in this regard. This is where Strecker’s paradigm of “Aneignung” seems to have its greatest explanatory potential as a paradigm that helps us understand how Paul used and transformed imperial language1 in order to subvert the idea of Roman superiority. Here, we are dealing with a resonance of Roman concepts that are in conflict with Christian ideas. Nevertheless, even in this category we might find passages where Paul’s extensive use of, for example, messianic terminology is so striking that it is plausible to assume a sharper focus on the Roman front (Chapter 6, Section 3.1). Rom 1:3-4 comes to mind as an exampie. Also, in 1 Cor 8:5 the explicit dichotomy makes it plausible that Paul is not only aware but consciously thinking about cases of illegitimate “lordship.

In the end, what has been demonstrated in this book is that it is not possible to falsify the subtext-hypothesis (in some of its forms) by reference to general objections that are said to affect its background plausibility in a very fundamental way. Our considerations were not meant to prove that the background plausibility of a counter-imperial subtext beneath a specific Pauline wording is especially high. But on the other hand, we can say that Barclay’s assessment certainly is too pessimistic with regard to the value of the background plausibility of counter-imperial statements in Paul and too optimistic with regard to the validity of his objections.

April 28, 2016 The Flood (RJS)
Recent Comments
0 | Leave a Comment
"Here's my issue with the whole thing. I agree with everything you're saying, but I ..."
Rachel Greer Singles Myth: The Intimacy Challenge
"Amen."
Eileen Almighty and Everlasting God
"This is John OrtbergNo, This is John Ortberg, emphasis mine"Once Ortberg was convinced the volunteer ..."
swbarnes2 This is John Ortberg
"Hey I realize this is an old post, but can you tell me the name ..."
Malissa Weekly Meanderings, 4 January 2020
Browse Our Archives
get the latest from
Evangelical
Sign up for our newsletter
POPULAR AT PATHEOS Evangelical
1